Neanderthal Cannibalism: They Made Tools from the Bones of Butchered Kin 45,000 Years Ago

Tübingen researchers in international team uncover grisly evidence that Neanderthals butchered their own kind some 40,000 years ago.

Neanderthal bones from an excavation in Belgium have yielded evidence of intentional butchering. The findings, from the Goyet caves near Namur, are the first evidence of cannibalism among Neanderthals north of the Alps. The skeletal remains were radiocarbon-dated to an age of around 40,500 to 45,500 years. Remarkably, this group of late Neanderthals also used the bones of their kind as tools, which were used to shape other tools of stone.

This collection of highly fragmented remains of Neanderthals from the "Troisième caverne" Goyet derived from at least five individuals. The age of the marked with an asterisk fragments were determined directly with 40500-45500 years. The scale corresponds to three centimeters.


Professors Hervé Bocherens and Johannes Krause of Tübingen’s Senckenberg Center for Human Evolution and Palaeoenvironment, along with Cosimo Posth and Christoph Wissing, also of the University of Tübingen, took part in the investigations. A review of the finds from the Troisième caverne of Goyet combined results from various disciplines; it identified 99 previously uncertain bone fragments as Neanderthal bones. That means Goyet has yielded the greatest amount of Neandertal remains north of the Alps.

By making a complete analysis of the mitochondrial DNA of ten Neanderthals, the researchers doubled the existing genetic data on this species of humans which died out some 30,000 years ago. They confirmed earlier studies’ results, which showed relatively little genetic variation in late European Neanderthals - in other words, that they were closely related to one another. The findings have been published in the latest Scientific Reports.

Different categories of man-made changes, which can be found in the Neanderthal bones from Goyet: femur I (left) has recesses and a notch, which originate from the shock processing, and femur III (right) shows average scores that reveal a processing at a slaughter. Femur III also has tracks that indicate a use for finishing the edges of stone tools. The scale corresponds to a centimeter.


The Troisième caverne of Goyet was excavated nearly 150 years ago. Today, researchers are able to extract vast amounts of information using current methods - such as precise digital measurement and categorization of the bones, examination of the conditions in which the bone fragments were preserved, as well as isotopic and genetic analysis.

Some Neanderthal remains from Goyet have been worked by human hands, as evidenced by cut marks, pits and notches. The researchers see this as an indication that the bodies from which they came were butchered. This appears to have been done thoroughly; the remains indicate processes of skinning, cutting up, and extraction of the bone marrow.

“These indications allow us to assume that Neanderthals practiced cannibalism,” says Hervé Bocherens. But he adds that it is impossible to say whether the remains were butchered as part of some symbolic act, or whether the butchering was carried out simply for food.

“The many remains of horses and reindeer found in Goyet were processed the same way,” Bocherens says. Researchers have long debated the evidence of cannibalism among Neanderthals, which until now focused on the sites of El Sidrón and Zafarraya in Spain and two French sites, Moula-Guercy and Les Pradelles. The Troisième caverne of Goyet is the first example of this phenomenon from more northern parts of Europe.

Entrance to the "Troisième caverne" Goyet, Belgium: An international research team has identified new Neanderthal remains from the cave, having evidence of cannibalism. The cave was excavated nearly 150 years ago. 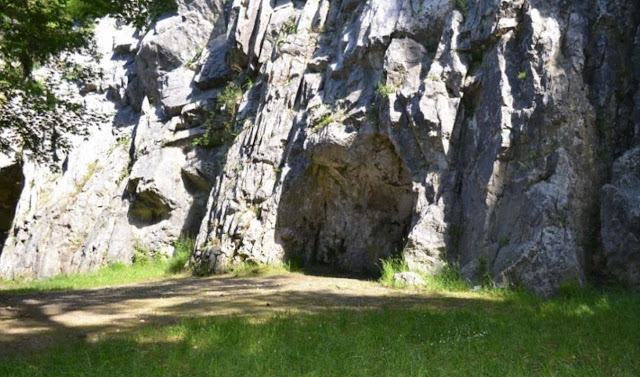 The new findings open up many possibilities regarding the way late Neanderthals dealt with their dead in this last period before they died out. Bocherens says none of the other Neanderthal sites in the region have yielded indications that the dead were dealt with as they were in Goyet. On the contrary, they have yielded burials. Researchers say that, in addition, other northern European Neanderthal sites had a greater variety and various arsenals of stone tools.

“The big differences in the behavior of these people on the one hand, and the close genetic relationship between late European Neanderthals on the other, raise many questions about the social lives and exchange between various groups,” says Bocherens.