Celebrating its 50th anniversary this year, the TV series "Star Trek" has captured the public’s imagination with the signature phrase, "To boldly go where no one has gone before." NASA's Hubble Space Telescope doesn't "boldly go" deep into space, but it is "boldly peering" deeper into the universe than ever before to explore the warping of space and time and uncover some of the farthest objects ever seen.

When "Star Trek" was first broadcast in 1966, the largest telescopes on Earth could only see about halfway across the universe - the rest was uncharted territory. But Hubble's powerful vision has carried us into the true "final frontier."

This is epitomized in the latest Hubble image released today in time for the new motion picture "Star Trek Beyond." The Hubble image unveils a very cluttered-looking universe filled with galaxies near and far. Some are distorted like a funhouse mirror through a warping-of-space phenomenon first predicted by Einstein a century ago.

In the center of the image is the immense galaxy cluster Abell S1063, located 4 billion light-years away, and surrounded by magnified images of galaxies much farther.

Thanks to Hubble's exquisite sharpness, the photo unveils the effect of space warping due to gravity. The huge mass of the cluster distorts and magnifies the light from galaxies that lie far behind it due to an effect called gravitational lensing. This phenomenon allows Hubble to see galaxies that would otherwise be too small and faint to observe. This "warp field" makes it possible to get a peek at the very first generation of galaxies. Already, an infant galaxy has been found in the field, as it looked 1 billion years after the big bang.

This view of a massive cluster of galaxies unveils a very cluttered-looking universe filled with galaxies near and far. Some are distorted like a funhouse mirror through a "space warp" phenomenon first predicted by Einstein a century ago. 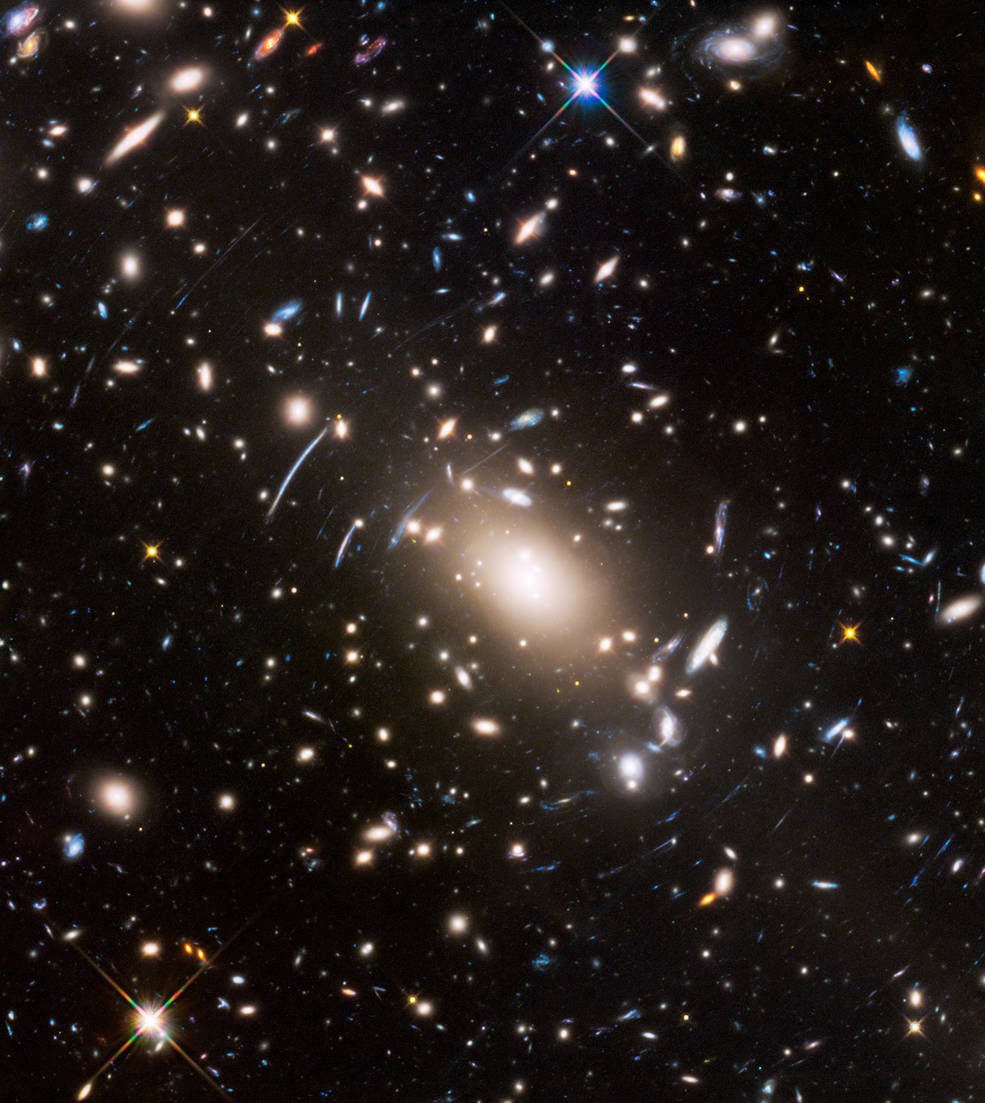 This frontier image provides a sneak peak of the early universe, and gives us a taste of what the James Webb Space Telescope will be capable of seeing in greater detail when it launches in 2018.

The Frontier Fields program is an ambitious three-year effort, begun in 2013, that teams Hubble with NASA's other Great Observatories - the Spitzer Space Telescope and the Chandra X-ray Observatory - to probe the early universe by studying large galaxy clusters. Identifying the magnified images of background galaxies within these clusters will help astronomers to improve their models of the distribution of both ordinary and dark matter in the galaxy cluster. This is key to understanding the mysterious nature of dark matter that comprises most of the mass of the universe.

The Hubble Space Telescope is a project of international cooperation between NASA and the European Space Agency. NASA's Goddard Space Flight Center in Greenbelt, Maryland, manages the telescope. The Space Telescope Science Institute (STScI) in Baltimore, Maryland, conducts Hubble science operations. STScI is operated for NASA by the Association of Universities for Research in Astronomy in Washington, D.C.