It takes a little imagination to wish some favorite fictional universes into existence. But, for legions of "Star Trek" fans, they don’t have to wish: one star system really exists in our Milky Way galaxy. In Star Trek lore, Vulcan is the home of logic, learning and the deeply beloved first officer Mr. Spock. While Vulcan is fictional, the star system it belongs to–40 Eridani–is very real. It’s located only 16.5 light-years away from Earth and its primary star can be spotted with the naked eye. So how much is science fiction and how much is science fact? 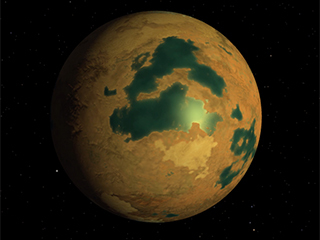 “Could there be an Earth-like planet in this system? We have no way of knowing that now,” said Karl Stapelfeldt, chief scientist of NASA’s Exoplanet Exploration Program. So while Vulcan (as far as we know) doesn’t exist, a fascinating triple sunset would occur on any rocky planet in the system, because 40 Eridani has three stars that circle each other.

The most massive is 40 Eridani A, a dwarf star that is the mythical Vulcan’s sun. The other two are a pair, orbiting each other at a distance from 40 Eridani A. This binary pair contains a red dwarf (40 Eridani C)­ and a white dwarf star (40 Eridani B). From the surface of Vulcan, “they would gleam brilliantly in the Vulcan sky,” according to Rodenberry in his 1991 letter to Sky & Telescope magazine. 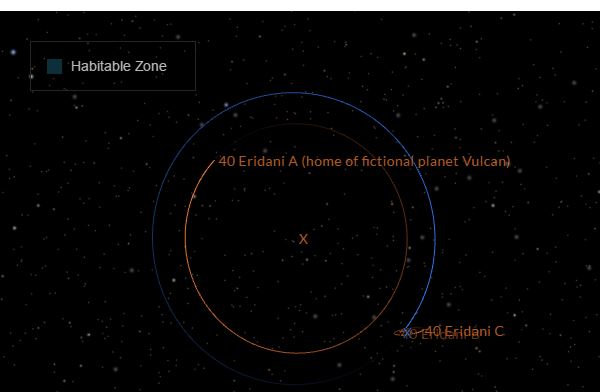 If you believe in science fiction, Mr. Spock’s dreamt-up world lives in the habitable zone of the largest star, 40 Eridani A. The habitable zone, shown as the area in blue-green, is the distance from a star where liquid water is said to exist. Too far away from its sun and Vulcan would freeze like Pluto; too close and it would sizzle like Mercury. Vulcan is perched on the inner edge, lending the world its imagined desert-like quality (at least, in a timeline where the planet remains undestroyed). But if there were a planet like Vulcan in the 40 Eridani system, would we be able to see it? Not yet. “We don’t yet have a way to detect it, but NASA is working on the technology to make it possible,” Stapelfeldt said.