By following honeyguides, a species of bird, people in Africa are able to locate bees’ nests to harvest honey. Research now reveals that humans use special calls to solicit the help of honeyguides and that honeyguides actively recruit appropriate human partners. This relationship is a rare example of cooperation between humans and free-living animals.

Humans have trained a range of species to help them find food: examples are dogs, falcons and cormorants. These animals are domesticated or taught to cooperate by their owners. Human-animal collaboration in the wild is much rarer. But it has long been known that, in many parts of Africa, people and a species of wax-eating bird called the greater honeyguide work together to find wild bees’ nests which provide a valuable resource to them both.

Honeyguides give a special call to attract people’s attention, then fly from tree to tree to indicate the direction of a bees’ nest. We humans are useful collaborators to honeyguides because of our ability to subdue stinging bees with smoke and chop open their nest, providing wax for the honeyguide and honey for ourselves.

Experiments carried out in the Mozambican bush now show that this unique human-animal relationship has an extra dimension: not only do honeyguides use calls to solicit human partners, but humans use specialised calls to recruit birds’ assistance. Research in the Niassa National Reserve reveals that by using specialised calls to communicate and cooperate with each other, people and wild birds can significantly increase their chances of locating vital sources of calorie-laden food. 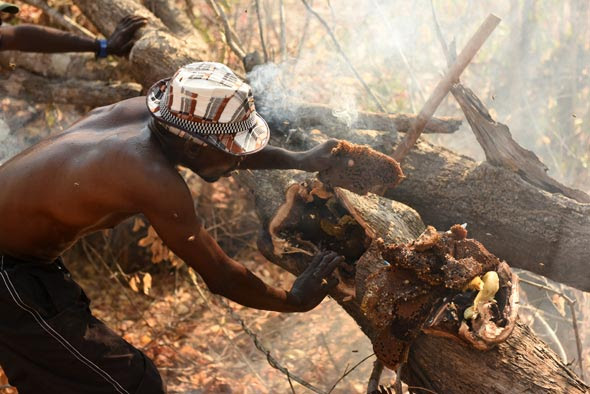 In a paper (Reciprocal signaling in honeyguide-human mutualism) published in Sciencetoday (22 July 2016), evolutionary biologist Dr Claire Spottiswoode (University of Cambridge and University of Cape Town) and co-authors (conservationists Keith Begg and Dr Colleen Begg of the Niassa Carnivore Project) reveal that honeyguides are able to respond adaptively to specialised signals given by people seeking their collaboration, resulting in two-way communication between humans and wild birds.

This reciprocal relationship plays out in the wild and occurs without any conventional kind of ‘training’ or coercion. “What’s remarkable about the honeyguide-human relationship is that it involves free-living wild animals whose interactions with humans have probably evolved through natural selection, probably over the course of hundreds of thousands of years,” says Spottiswoode, a specialist in bird behavioural ecology in Africa.

“Thanks to the work in Kenya of Hussein Isack, who electrified me as an 11-year-old when I heard him speak in Cape Town, we’ve long known that people can increase their rate of finding bees’ nests by collaborating with honeyguides, sometimes following them for over a kilometre. Keith and Colleen Begg, who do wonderful conservation work in northern Mozambique, alerted me to the Yao people’s traditional practice of using a distinctive call which they believe helps them to recruit honeyguides. This was instantly intriguing – could these calls really be a mode of communication between humans and a wild animal?” 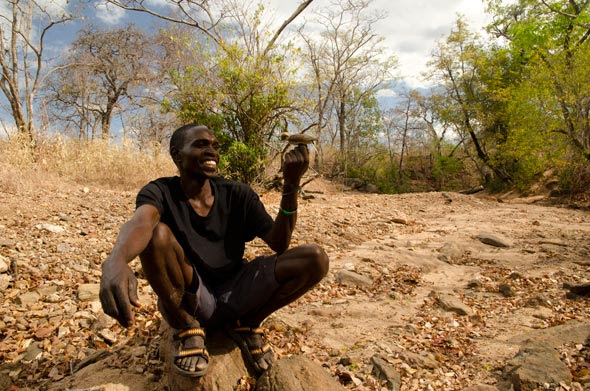 With the help of honey-hunters from the local Yao community, Spottiswoode carried out controlled experiments in Mozambique’s Niassa National Reserve to test whether the birds were able to distinguish the call from other human sounds, and so to respond to it appropriately. The ‘honey-hunting call’ made by honey-hunters, and passed from generation to generation, is a loud trill followed by a short grunt: ‘brrr-hm’.

To discover whether honeyguides associate ‘brrr-hm’ with a specific meaning , Spottiswoode made recordings of this call and two kinds of ‘control’ sounds : arbitrary words called out by the honey-hunters and the calls of another bird species. When these sounds were played back in the wild during experimental honey-hunting trips, birds were much more likely respond to the ‘brrr-hm’ call made to attract them than they were to either of the other sounds.

“The traditional ‘brrr-hm’ call increased the probability of being guided by a honeyguide from 33% to 66%, and the overall probability of being shown a bees’ nest from 16% to 54% compared to the control sounds. In other words, the ‘brrr-hm’ call more than tripled the chances of a successful interaction, yielding honey for the humans and wax for the bird,” says Spottiswoode.

“Intriguingly, people in other parts of Africa use very different sounds for the same purpose – for example, our colleague Brian Wood’s work has shown that Hadza honey-hunters in Tanzania make a melodious whistling sound to recruit honeyguides. We’d love to know whether honeyguides have learnt this language-like variation in human signals across Africa, allowing them to recognise good collaborators among the local people living alongside them.” 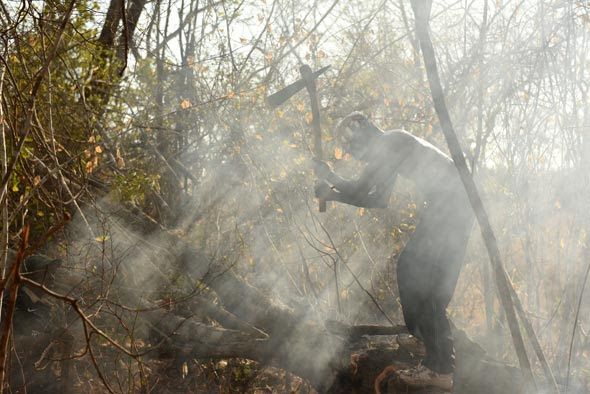 The greater honeyguide is widely found in sub-Saharan Africa, where its unassuming brown plumage belies its complex interactions with other species. Its interactions with humans to obtain food are mutually beneficial, but to obtain care for its young it is a brutal exploiter of other birds.

“Like a cuckoo, it lays its eggs in the nests of other birds, and its chick hatches equipped with sharp hooks at the tips of its beak. Only a few days old, the young honeyguide uses these built-in weapons to kill its foster siblings as soon as they hatch,” says Spottiswoode. “So the greater honeyguide is a master of deception and exploitation as well as cooperation – a proper Jekyll and Hyde of the bird world.”

Human cooperation is crucial to honeyguides because bees’ nests are often hidden in inaccessible crevices high up in trees – and honeybees sting ferociously. Therefore the honeyguide waits while an expert human undertakes the dangerous tasks of subduing the bees (by smoking them out using a flaming bundle of twigs and leaves hoisted high into the tree) and extracting the honey from within, usually by felling the entire tree. There is no competition for the prize: the honey-hunters harvest the honey and honeyguides devour the wax combs left behind. 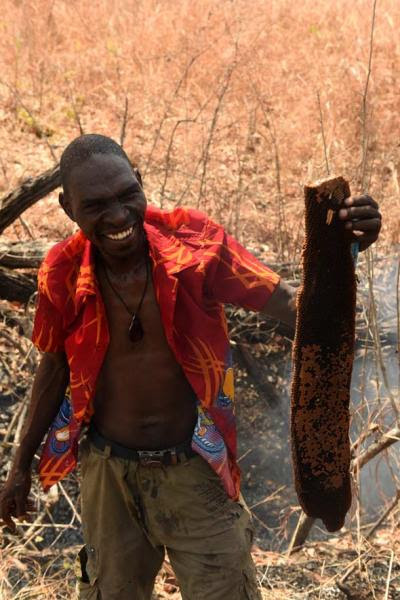 Co-author Dr Colleen Begg adds: “The Niassa National Reserve is as much about people as it is about wildlife, and this is really exemplified by these human-honeyguide interactions that have been forged over thousands of years of coexistence. While many people consider wilderness not to have people in it, at Niassa people are an essential part of the landscape.”

This foraging partnership was recorded in print as early as 1588, when a Portuguese missionary in what is now Mozambique observed a small brown bird slipping into his church to nibble his wax candles. He described how this bird had another remarkable habit: it led men to bees’ nests by calling and flying from tree to tree. Once the nest was located, he wrote in his account of life on the eastern African coast in the 17th century, Ethiopia Oriental, the men harvested the honey and the bird fed on the wax.

“What João dos Santos described was what we now call a mutualism between species. Mutualisms are crucial everywhere in nature, but to our knowledge, the only comparable foraging partnership between wild animals and our own species involves free-living dolphins who chase schools of mullet into fishermen’s nets and in so doing manage to catch more for themselves. It would be fascinating to know whether dolphins respond to special calls made by fishermen, as Pliny the Elder asserted nearly two thousand years ago,” says Spottiswoode. 
“Back in Africa, we’re fascinated by the evolution of the honeyguide-human mutualism and, as a next step, we want to test whether young honeyguides learn to recognise local human signals, creating a mosaic of honeyguide cultural variation that reflects that of their human partners. Sadly, the mutualism has already vanished from many parts of Africa. The world is a richer place for wildernesses like Niassa where this astonishing example of human-animal cooperation still thrives.”

The project was funded by the Biotechnology and Biological Sciences Research Council (BBSRC) in the UK and the DST-NRF Centre of Excellence at the FitzPatrick Institute in South Africa.

For further information on this and other projects go to www.africancuckoos.com andwww.niassalion.org