Dr Diego Altamirano from the University of Southampton has contributed to new research that has proved the existence of a ‘gravitational vortex’ around a black hole.

The discovery, published in the journal Monthly Notices of the Royal Astronomical Society, solves a mystery that has eluded astronomers for more than 30 years and will allow them to map the behaviour of matter very close to black holes. It could also open the door to future investigations of Albert Einstein's theory of general relativity. 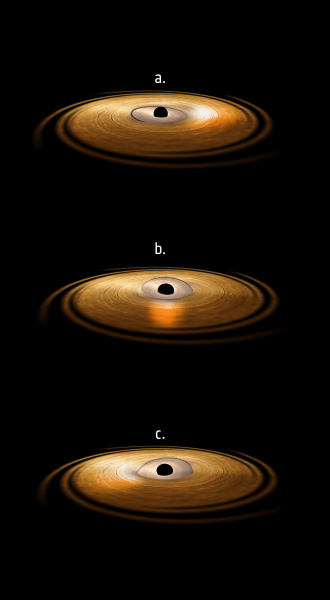 Matter falling into a black hole heats up and radiates back into space as X-rays. In the 1980s, astronomers discovered that the X-rays coming from black holes flicker, a phenomenon called Quasi Periodic Oscillation (QPO). QPOs are associated with a gravitational effect predicted by Einstein's general relativity: that a spinning object will create a kind of gravitational vortex.

“It is a bit like twisting a spoon in honey. Imagine that the honey is space and anything embedded in the honey will be 'dragged' around by the twisting spoon,” explains lead author Adam Ingram from the University of Amsterdam, who began working to understand QPOs for his PhD in 2009. “In reality, this means that anything orbiting a spinning object will have its motion affected.”

Together with colleagues, Ingram published a paper in 2009 suggesting that the QPO is driven by this Lense-Thirring effect, when the flat disc of matter surrounding a black hole, known as an ‘accretion disc’ spirals inwards towards the black hole. Close to the black hole, the accretion disc puffs up into a hot plasma, termed the hot inner flow, which shrinks as it is eaten by the black hole.

Artist's impression of the XMM-Newton satellite. 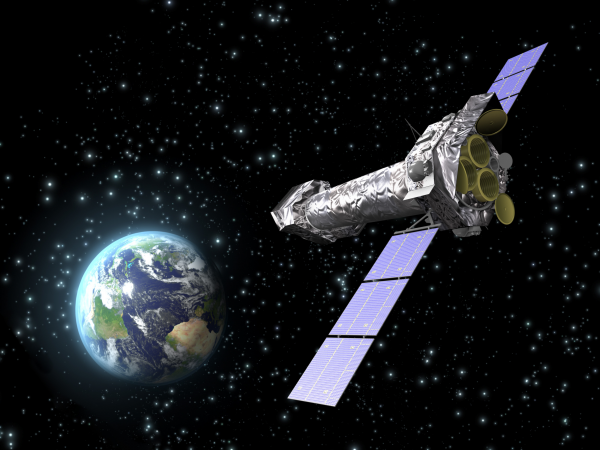 The inner flow releases high energy radiation that strikes the matter in the surrounding accretion disc, making the iron atoms in the disc shine like a fluorescent light tube. Instead of visible light, the iron releases X-rays of almost a single wavelength - referred to as ‘a line’. Because the accretion disc is rotating, the line will sometimes shine on the approaching disc material and sometimes on the receding material, making the line wobble back and forth.

Dr Altamirano, Royal Society University Research Fellow at the University of Southampton, said: “After adding all the observational data together, we saw that the iron line was wobbling in accordance with the predictions of general relativity. This meant we were directly measuring the motion of matter in a strong gravitational field near to a black hole – the first time that the Lense-Thirring effect has been measured in a strong gravitational field.”

The technique will allow astronomers to map matter in the inner regions of accretion discs around black holes. It also hints at a powerful new tool with which to test general relativity.

Einstein's theory is largely untested in such strong gravitational fields. So if astronomers can understand the physics of the matter that is flowing into the black hole, they can use it to test the predictions of general relativity as never before - but only if the movement of the matter in the accretion disc can be completely understood.

“This is a major breakthrough since the study combines information about the timing and energy of X-ray photons to settle the 30-year debate around the origin of QPOs. The photon collecting capability of XMM-Newton was instrumental in this work,” says Norbert Schartel, ESA Project Scientist for XMM-Newton.
on July 14, 2016