The Energy Department's Office of Energy Efficiency and Renewable Energy today announced a total of $11 million for 16 projects intended to develop innovative, early-stage solutions in both photovoltaics (PV) and concentrating solar power (CSP).

Ten of the projects are small-scale research and development (R&D) projects designed to push the limits of PV technologies, potentially advancing the state of the art in new cell and module architectures, efficiency, energy output, service lifetime, and manufacturability. These awardees will be funded under the Small Innovative Projects in Solar (SIPS) program developed to support progress toward leveling the cost of solar electricity to approximately $0.02 to $0.03 per kilowatt-hour by 2030.

2014 was the largest year ever in the U.S. for CSP--more than 767 megawatts of new CSP generation came online with the completion of Ivanpah, Genesis Solar’s second phase, and Abengoa’s Mojave Solar. SolarReserve’s 110 MW Crescent Dunes, is the next U.S. plant slated to come online in early 2016. 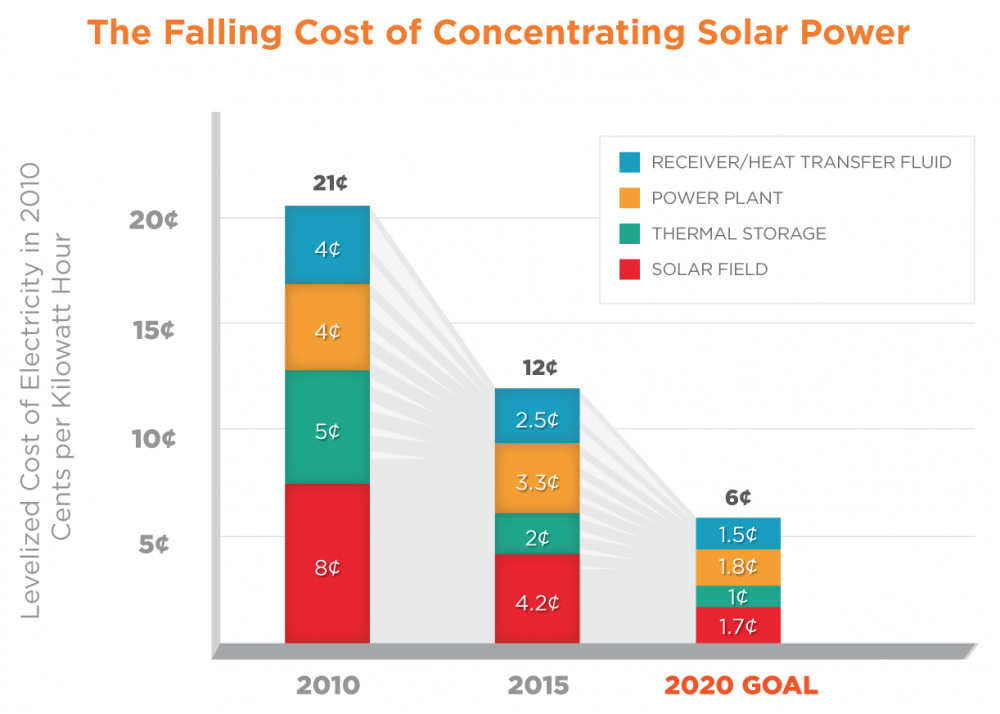 The small, early-stage PV projects will receive nearly $2 million to demonstrate the potential for expanded work in novel or emerging areas of PV research. These first-of-their-kind, single-year projects in the SunShot Initiative's PV R&D portfolio are designed to allow researchers to test a concept and, if successful, develop data to support further research. This approach allows researchers to take a year to demonstrate that their ideas merit greater investment in the future.

The other six awardees are CSP R&D projects focused on the most expensive component of a CSP plant, the collectors, and aim to make dramatic performance improvements and cost reductions. The Concentrating Optics for Lower Levelized Energy Costs (COLLECTS) program targets a more ambitious cost-to-efficiency metric for CSP collectors than what was set forward in the 2020 SunShot targets.

Solar collectors currently account for up to 40 percent of the total plant cost and are the largest capital cost component of a CSP plant. These six CSP awards through SunShot's COLLECTS program total nearly $9 million dedicated to the design and manufacture of lower-cost solar collectors, which could in turn reduce the overall cost of a CSP power plant.

The SunShot Initiative supports research and development of concentrating solar power(CSP) technologies that reduce the cost of solar energy. CSP helps to achieve the SunShot Initiative cost targets with systems that can supply solar power on demand, even when there is no sunlight, through the use of thermal storage. Since SunShot’s inception, the levelized cost of electricity for CSP has decreased about 36 percent, from $0.21 cents per kilowatt hour to $0.13 cents per kilowatt hour, already over half of the way toward achieving the SunShot goal of $0.06 per kilowatt hour by 2020.

Since its launch in 2011, the SunShot Initiative has been focused on driving down the cost of utility-scale solar to $0.06 per kilowatt-hour by 2020, without subsidy. These new programs, developed within the SunShot Initiative, provide a framework for post-2020 technical and cost-reduction goals.

The Energy Department's SunShot Initiative is a collaborative national effort that aggressively drives innovation to make solar energy cost competitive with traditional energy sources before the end of the decade, without subsidies. The Office of Energy Efficiency and Renewable Energy works with private industry, universities, and national laboratories to accelerate the development and deployment of energy efficiency and renewable energy technologies that strengthen U.S. energy security, environmental quality, and economic vitality.
on July 28, 2016