Discover The Dizzying Spin of the Milky Way Galaxy’s “Halo”

Astronomers at the University of Michigan’s College of Literature, Science, and the Arts (LSA) discovered for the first time that the hot gas in the halo of the Milky Way galaxy is spinning in the same direction and at comparable speed as the galaxy's disk, which contains our stars, planets, gas, and dust. This new knowledge sheds light on how individual atoms have assembled into stars, planets, and galaxies like our own, and what the future holds for these galaxies.

Our Milky Way galaxy and its small companions are surrounded by a giant halo of million-degree gas (seen in blue in this artists' rendition) that is only visible to X-ray telescopes in space. University of Michigan astronomers discovered that this massive hot halo spins in the same direction as the Milky Way disk and at a comparable speed. 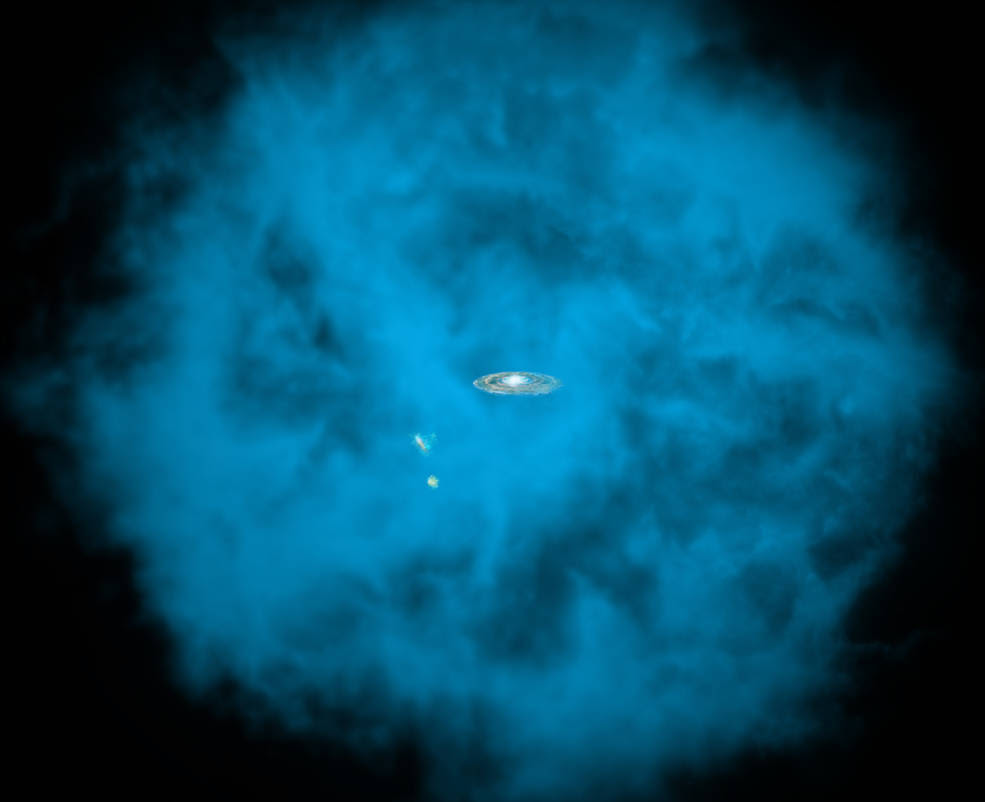 
“This flies in the face of expectations,” says Edmund Hodges-Kluck, assistant research scientist. “People just assumed that the disk of the Milky Way spins while this enormous reservoir of hot gas is stationary – but that is wrong. This hot gas reservoir is rotating as well, just not quite as fast as the disk.”

The new NASA-funded research using the archival data obtained by XMM-Newton, a European Space Agency telescope, was recently published in theAstrophysical Journal. The study focuses on our galaxy’s hot gaseous halo, which is several times larger than the Milky Way disk and composed of ionized plasma.

Because motion produces a shift in the wavelength of light, the U-M researchers measured such shifts around the sky using lines of very hot oxygen. What they found was groundbreaking: The line shifts measured by the researchers show that the galaxy’s halo spins in the same direction as the disk of the Milky Way and at a similar speed—about 400,000 mph for the halo versus 540,000 mph for the disk.

“The rotation of the hot halo is an incredible clue to how the Milky Way formed,” said Hodges Kluck. “It tells us that this hot atmosphere is the original source of a lot of the matter in the disk.”

Scientists have long puzzled over why almost all galaxies, including the Milky Way, seem to lack most of the matter that they otherwise would expect to find. Astronomers believe that about 80% of the matter in the universe is the mysterious “dark matter” that, so far, can only be detected by its gravitational pull. But even most of the remaining 20% of “normal” matter is missing from galaxy disks. More recently, some of the “missing” matter has been discovered in the halo. The U-M researchers say that learning about the direction and speed of the spinning halo can help us learn both how the material got there in the first place, and the rate at which we expect the matter to settle into the galaxy.

“Now that we know about the rotation, theorists will begin to use this to learn how our Milky Way galaxy formed – and its eventual destiny,” says Joel Bregman, a U-M LSA professor of astronomy.

“We can use this discovery to learn so much more – the rotation of this hot halo will be a big topic of future X-ray spectrographs,” Bregman says.


Contacts and sources:
By Felicia Chou
NASA Headquarters,
on July 25, 2016