Astronomers announced this week the sharpest results yet on the properties of dark energy.

A team of hundreds of physicists and astronomers have announced results from the largest-ever, three-dimensional map of distant galaxies. The team constructed this map to make one of the most precise measurements yet of the dark energy currently driving the accelerated expansion of the Universe.

"We have spent five years collecting measurements of 1.2 million galaxies over one quarter of the sky to map out the structure of the Universe over a volume of 650 cubic billion light years," says Jeremy Tinker of New York University, a co-leader of the scientific team carrying out this effort. "This map has allowed us to make the best measurements yet of the effects of dark energy in the expansion of the Universe. We are making our results and map available to the world."

This is one slice through the map of the large-scale structure of the Universe from the Sloan Digital Sky Survey and its Baryon Oscillation Spectroscopic Survey. Each dot in this picture indi-cates the position of a galaxy 6 billion years into the past. The image covers about 1/20th of the sky, a slice of the Universe 6 billion light-years wide, 4.5 billion light-years high, and 500 million light-years thick. Color indicates distance from Earth, ranging from yellow on the near side of the slice to purple on the far side. Galaxies are highly clustered, revealing superclusters and voids whose presence is seeded in the first fraction of a second after the Big Bang. This image contains 48,741 galaxies, about 3% of the full survey dataset. Grey patches are small regions without survey data. 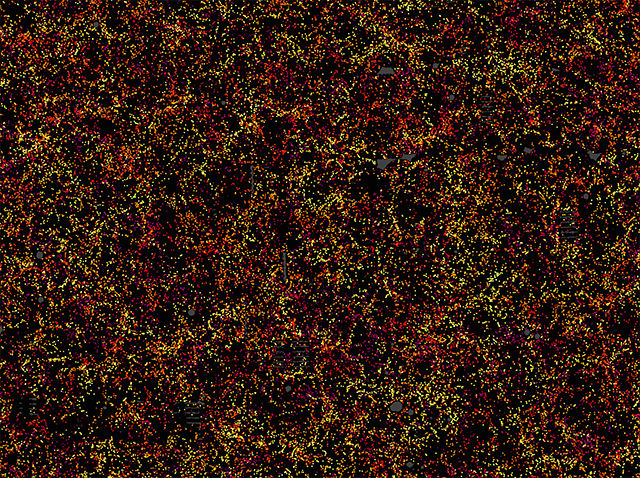 
These new measurements were carried out by the Baryon Oscillation Spectroscopic Survey (BOSS) program of the Sloan Digital Sky Survey-III. Shaped by a continuous tug-of-war between dark matter and dark energy, the map revealed by BOSS allows scientists to measure the expansion rate of the Universe and thus determine the amount of matter and dark energy that make up the present-day Universe. A collection of papers describing these results was submitted this week to the Monthly Notices of the Royal Astronomical Society.

BOSS measures the expansion rate of the Universe by determining the size of the baryonic acoustic oscillations (BAO) in the three-dimensional distribution of galaxies. The original BAO size is determined by pressure waves that travelled through the young Universe up to when it was only 400,000 years old (the Universe is presently 13.8 billion years old), at which point they became frozen in the matter distribution of the Universe. The end result is that galaxies have a slight preference to be separated by a characteristic distance that astronomers call the acoustic scale. The size of the acoustic scale at 13.4 billion years ago has been exquisitely determined from observations of the cosmic microwave background from the light emitted when the pressure waves became frozen. Measuring the distribution of galaxies since that time allows astronomers to measure how dark matter and dark energy have competed to govern the rate of expansion of the Universe.

The Sloan Digital Sky Survey and its Baryon Oscillation Spectroscopic Survey has transformed a two-dimensional image of the sky (left panel) into a three-dimensional map spanning distances of billions of light years, shown here from two perspectives (middle and right panels). This map includes 120,000 galaxies over 10% of the survey area. The brighter regions correspond to the regions of the Universe with more galaxies and therefore more dark matter.

"We've made the largest map for studying the 95% of the universe that is dark," noted David Schlegel, an astrophysicist at Lawrence Berkeley National Laboratory (Berkeley Lab) and principal investigator for BOSS. "In this map, we can see galaxies being gravitationally pulled towards other galaxies by dark matter. And on much larger scales, we see the effect of dark energy ripping the universe apart."

Shirley Ho, an astrophysicist at Berkeley Lab and Carnegie Mellon University (CMU), co-led two of the companion papers and adds, "We can now measure how much the galaxies and stars cluster together as a function of time to such an accuracy we can test General Relativity at cosmological scales."

Ariel Sanchez of the Max-Planck Institute of Extraterrestrial Physics led the effort to estimate the exact amount of dark matter and dark energy based on the BOSS data and explains: "Measuring the acoustic scale across cosmic history gives a direct ruler with which to measure the Universe's expansion rate. With BOSS, we have traced the BAO's subtle imprint on the distribution of galaxies spanning a range of time from 2 to 7 billion years ago."

To measure the size of these ancient giant waves to such sharp precision, BOSS had to make an unprecedented and ambitious galaxy map, many times larger than previous surveys. At the time the BOSS program was planned, dark energy had been previously determined to significantly influence the expansion of the Universe starting about 5 billion years ago. BOSS was thus designed to measure the BAO feature from before this point (7 billion years ago) out to near the present day (2 billion years ago).

Jose Vazquez of Brookhaven National Laboratory combined the BOSS results with other surveys and searched for any evidence of unexplained physical phenomena in the results. "Our latest results tie into a clean cosmological picture, giving strength to the standard cosmological model that has emerged over the last eighteen years."

Rita Tojeiro of the University of St. Andrews is the other co-leader of the BOSS galaxy clustering working group along with Tinker. "We see a dramatic connection between the sound wave im-prints seen in the cosmic microwave background 400,000 years after the Big Bang to the clustering of galaxies 7-12 billion years later. The ability to observe a single well-modeled physical effect from recombination until today is a great boon for cosmology."

The map also reveals the distinctive signature of the coherent movement of galaxies toward regions of the Universe with more matter, due to the attractive force of gravity. Crucially, the observed amount of infall is explained well by the predictions of general relativity.

"The results from BOSS provide a solid foundation for even more precise future BAO measurements, such as those we expect from the Dark Energy Spectroscopic Instrument (DESI)," says Natalie Roe, Physics Division director at Berkeley Lab. "DESI will construct a more detailed 3-dimensional map in a volume of space ten times larger to precisely characterize dark energy -- and ultimately the future of our universe."


Funding for SDSS-III has been provided by the Alfred P. Sloan Foundation, the Participating Institutions, the National Science Foundation, and the U.S. Department of Energy Office of Science. For more on SDSS-III, visit http://www.sdss3.org/.