From the comics to reality, organic robots are making a move.

Researchers at Case Western Reserve University have combined tissues from a sea slug with flexible 3-D printed components to build "biohybrid" robots that crawl like sea turtles on the beach.

A muscle from the slug's mouth provides the movement, which is currently controlled by an external electrical field. However, future iterations of the device will include ganglia, bundles of neurons and nerves that normally conduct signals to the muscle as the slug feeds, as an organic controller.

The researchers also manipulated collagen from the slug's skin to build an organic scaffold to be tested in new versions of the robot.

In the future, swarms of biohybrid robots could be released for such tasks as locating the source of a toxic leak in a pond that would send animals fleeing, the scientists say. Or they could search the ocean floor for a black box flight data recorder, a potentially long process that may leave current robots stilled with dead batteries.

A sea slug's buccal I2 muscle powers this biohybrid robot as it crawls like a sea turtle. The body and arms are made from a 3-D printed polymer. 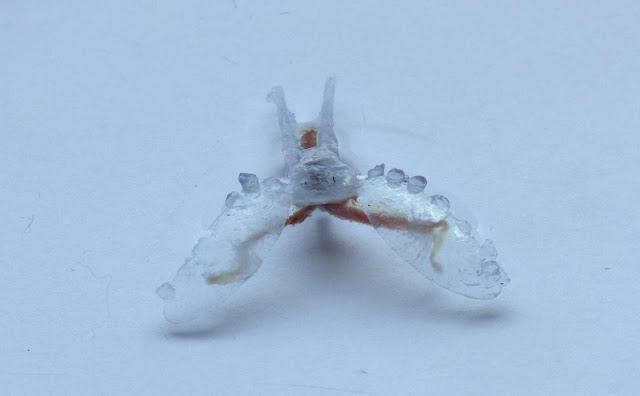 "We're building a living machine--a biohybrid robot that's not completely organic--yet," said Victoria Webster, a PhD student who is leading the research. Webster will discuss mining the sea slug for materials and constructing the hybrid, which is a little under 2 inches long, at the Living Machines conference in Edinburgh, Scotland, this week.

By combining materials from the California sea slug, Aplysia californica, with three-dimensional printed parts, "we're creating a robot that can manage different tasks than an animal or a purely manmade robot could," Quinn said.

The researchers chose the sea slug because the animal is durable down to its cells, withstanding substantial changes in temperature, salinity and more as Pacific Ocean tides shift its environment between deep water and shallow pools. Compared to mammal and bird muscles, which require strictly controlled environments to operate, the slug's are much more adaptable.

For the searching tasks, "we want the robots to be compliant, to interact with the environment," Webster said. "One of the problems with traditional robotics, especially on the small scale, is that actuators--the units that provide movement--tend to be rigid."

Muscle cells are compliant and also carry their own fuel source--nutrients in the medium around them. Because they're soft, they're safer for operations than nuts-and-bolts actuators and have a much higher power-to-weight ratio, Webster said.

The researchers originally tried using muscle cells but changed to using the entire I2 muscle from the mouth area, or buccal mass. "The muscle already had the optimal structure and form to provide the function and strength needed," Chiel said.

Akkus said, "When we integrate the muscle with its natural biological structure, it's hundreds to 1,000 times better."

In their first robots, the buccal muscle, which naturally has two "arms," is connected to the robots printed polymer arms and body. The robot moves when the buccal muscle contracts and releases, swinging the arms back and forth. In early testing, the bot pulled itself about 0.4 centimeters per minute.

To control movement, the scientists are turning to the animal's own ganglia. They can use either chemical or electrical stimuli to induce the nerves to contract the muscle.

"With the ganglia, the muscle is capable of much more complex movement, compared to using a manmade control, and it's capable of learning," Webster said.

With the goal of making a completely organic robot, Akkus' lab gelled collagen from the slug's skin and also used electrical currents to align and compact collagen threads together, to build a lightweight, flexible, yet strong scaffold.

The team is preparing to test organic versions as well as new geometries for the body, designed to produce more efficient movement.

If completely organic robots prove workable, the researchers say, a swarm released at sea or in a pond or a remote piece of land, won't be much of a worry if they can't be recovered. They're likely to be inexpensive and won't pollute the location with metals and battery chemicals but be eaten or degrade into compost.

The Tissue Fabrication and Microbiology Lab is working with the Case Biorobotics Laboratory on the development of completely organic robotics devices, powered by muscle cells. Whether working with massive industrial robots or medical robots capable of performing operations, robotic systems can cause grievous harm if not designed and implemented safely.

In order to develop medical robots capable of operation inside the human body, actuators are needed which will operate inside organisms while doing minimal damage to surrounding tissue. The development of such devices could facilitate minimally invasive procedures, targeted drug delivery, and vascular inspection and repair. One possible technique for developing such small-scale actuators is to culture muscle cells on engineered substrates.

Previously created biohybrid robots have used nondegradable, synthetic polymers; however, such devices require additional manufacturing steps in order to micropattern and treat the scaffolds for cellular attachment. By using Electrochemically Aligned Collagen (ELAC) scaffolds, devices can be manufactured without these additional steps. These devices can be seeded with isolated muscle cells and stimulated to produce coordinated contractions, resulting in locomotion.