A Year on Earth – Recorded From 1 Million Miles

On July 20, 2015, NASA released to the world the first image of the sunlit side of Earth captured by the space agency's EPIC camera on NOAA's DSCOVR satellite. The camera has now recorded a full year of life on Earth from its orbit at Lagrange point 1, approximately 1 million miles from Earth, where it is balanced between the gravity of our home planet and the sun.


EPIC takes a new picture every two hours, revealing how the planet would look to human eyes, capturing the ever-changing motion of clouds and weather systems and the fixed features of Earth such as deserts, forests and the distinct blues of different seas. EPIC will allow scientists to monitor ozone and aerosol levels in Earth’s atmosphere, cloud height, vegetation properties and the ultraviolet reflectivity of Earth.

The primary objective of DSCOVR, a partnership between NASA, the National Oceanic and Atmospheric Administration (NOAA) and the U.S. Air Force, is to maintain the nation’s real-time solar wind monitoring capabilities, which are critical to the accuracy and lead time of space weather alerts and forecasts from NOAA.

The journey has been a long one for the Deep Space Climate Observatory (DSCOVR). Once known as Triana, the satellite was conceived in 1998 to provide continuous views of Earth, to monitor the solar wind, and to measure fluctuations in Earth’s albedo. The mission was put on hold in 2001, and the partly-built satellite ended up in storage for several years with an uncertain future. In 2008, the National Oceanic and Atmospheric Administration (NOAA), NASA, and the U.S. Air Force decided to refurbish and update the spacecraft for launch.

America’s first operational deep space satellite orbits one million miles from Earth. Positioned between the sun and Earth, it is able to maintain a constant view of the sun and sun-lit side of Earth. This location is called Lagrange point 1. (Illustration is not to scale)

On February 11, 2015, DSCOVR was finally lofted into space by a SpaceX Falcon 9 rocket. After journey of about 1.6 million kilometers (1 million miles) to the L1 Lagrange Point, the satellite and its Earth Polychromatic Imaging Camera (EPIC) has returned its first view of the entire sunlit side of Earth. At L1—four times farther than the orbit of the Moon—the gravitational pull of the Sun and Earth cancel out, providing a stable orbit and a continuous view of Earth.

The image was made by combining information from EPIC’s red, green, and blue bands.(Bands are narrow regions of the electromagnetic spectrum to which a remote sensing instrument responds. When EPIC collects data, it takes a series of 10 images at different bands—from ultraviolet to near infrared.) 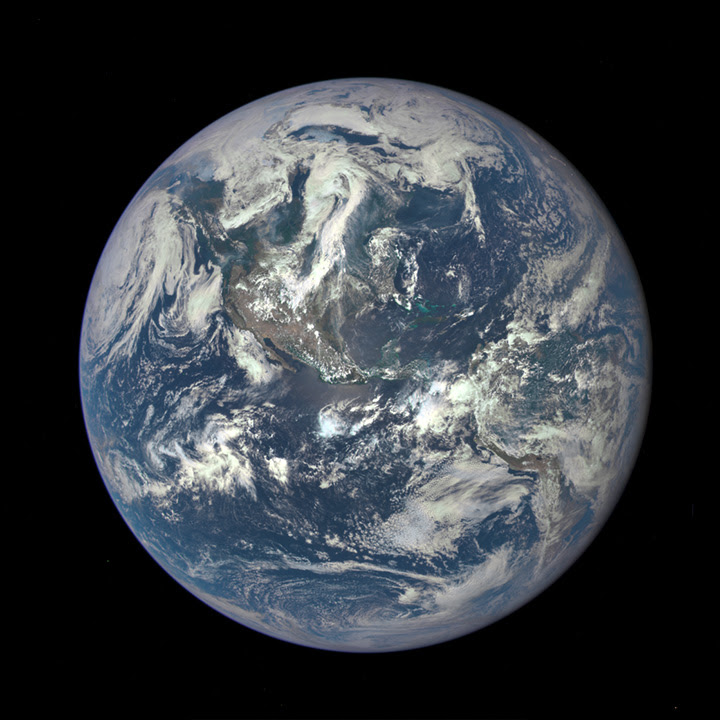 This first public image showed the effects of sunlight scattered by air molecules, giving the disk a characteristic bluish tint. The EPIC team is developing data processing techniques that will emphasize land features and remove this atmospheric effect. Once the instrument begins regular data acquisition, new images will be available every day, 12 to 36 hours after they are acquired by EPIC.

Images are posted to a dedicated web page. Data from EPIC will be used to measure ozone and aerosol levels in Earth’s atmosphere, as well as cloud height, vegetation properties, and the ultraviolet reflectivity of Earth. NASA will use this data for a number of Earth science applications, including dust and volcanic ash maps of the entire planet.