Plastic “continents [1]” are not static. Based on the oceanic circulation modelling work conducted in the Pacific, the IRD and CNRS researchers have recently shown that there are exit currents for these areas of the sea where these piles of waste build up. This means that they are not caught in a never-ending whirlpool in the middle of the ocean, as had been previously thought. Although inappropriate given the actual estimated concentrations, this term highlights the awareness of the impact of human activity on the oceans.

A huge waste vortex in each ocean

Due to the winds on the surface of the oceans and the rotation of the Earth (via the Coriolis force), huge vortexes, called “oceanic gyres”, are formed in each of the five major basins: North and South Pacific, North and South Atlantic, and the Indian Ocean. These huge whirlpools slowly gather in their wake all the plastic objects and waste floating on the surface of the water, accumulating year after year. 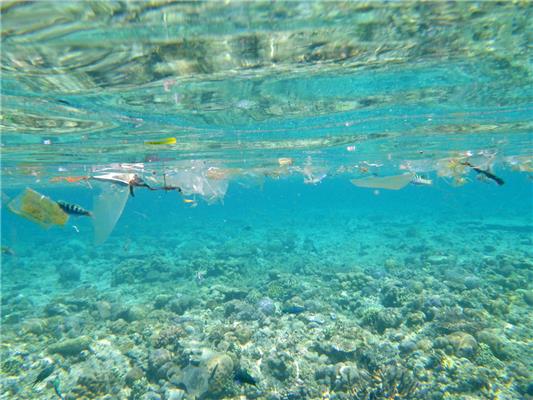 This pollution is now recognized as a global problem, representing a threat to marine biodiversity. In particular, this surface drift acts as a means of transport for the viruses and bacteria that the spread across the oceans.

Nevertheless, these plastic “continents”, as they incorrectly christened, are not, in fact, static. The IRD and CNRS researchers have recently revealed the existence of “exit doors” leading away from these large surface current convergence zones. The scientists started by studying the oceanic circulation in the Pacific modeled with a much finer spatial resolution than that of the models generally used for this type of study (those typically used for climate research).

Convergence zone and output currents in the South Pacific

They simulated the trajectories of several million particles, with currents defined on networks of 1/32° to 1/4° (meaning a range from a few kilometers to thirty or forty kilometers). The results obtained highlight currentsaeastwards instead. In addition to these currents there are physical processes such as the effects of the wind and waves, not taken into account in the models, which can also alter the trajectory and the transit time of the particles and waste.

In the Pacific, the waste may not necessarily be trapped in the center of the oceanic gyre and may be removed in the direction of the American coasts. Furthermore, these results are backed up by the work of the IRD’s Chilean partners. They have observed an increase in the amount of waste collected on their coastlines.

More detailed observations, modelling and analyses are required to gain a better understanding of the ocean surface currents that regulate the slow routing of plastic waste on the surface of the seas and, in the medium-term, implement strategies for collecting and recycling all of this waste.