What Happens When You Steam a Planet?

The media often imply that the goal of the hunt for extrasolar planets is to find a rocky planet about the size of Earth orbiting a star like the sun at a distance that would allow liquid water to persist on its surface. In other words, the goal is to find Earth 2.0. Hot, rocky planets may change their composition if rock components vaporize in steam atmospheres that escape to space.

But there are reasons to be interested in the other worlds even if they couldn't possibly harbor life. The hot, rocky planets, for example, offer rare and precious clues to the character and evolution of the early Earth.

The Kepler satellite has detected more than 100 hot, rocky planets orbiting close to their stars. If these planets formed from interstellar clouds with Earth-like abundances of volatile elements, like hydrogen, water and carbon dioxide, these planets might have steam atmospheres.

Washington University in St. Louis cosmochemists show that hot, rocky exoplanets with steam atmospheres may vaporize some of their rocky elements and then lose them to space, changing the bulk composition of the planet. 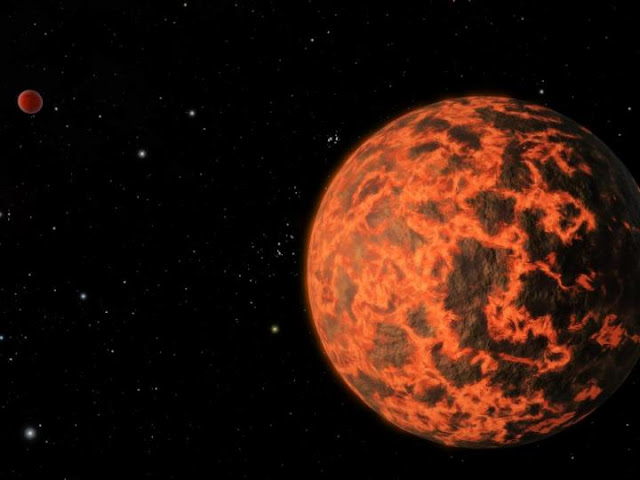 Steaming a rocky planet wouldn't just press out the wrinkles. Because the rock-forming elements dissolve in steam to different extents, steaming could, in principle, alter the planet's bulk composition, density and internal structure, especially if all or part of the rock-bearing steam atmosphere was then lost to space.

Bruce Fegley and Katharina Lodders-Fegley, respectively professor and research professor in earth and planetary sciences in Arts & Sciences at Washington University in St. Louis, published models of the chemistry of a steam atmosphere in equilibrium with a magma ocean at various temperatures and pressures in the June 20, 2016 issue of the Astrophysical Journal.

Based on their findings, they have some suggestions for planet hunters -- things they might see when they train their telescopes on the hot rocks.

Getting some steam up

The fact that planet hunters have discovered many hot rocks roughly the size of Earth is one of three lines of evidence that come together in this research, Fegley said. The other two are the solubility of silica and other rock-forming elements in steam, and the idea that the early Earth had a steam atmosphere.

The notion that rocks will dissolve in steam may seem outlandish, but it is common knowledge among geologists. "Geologists are mainly concerned with very hot water or water and steam mixtures, whereas we're looking at pure steam and temperatures hundreds of degrees hotter. But it's the same kind of idea," Fegley said.

The suspicion that the early Earth had a steam atmosphere goes back to 1974, when Gustave Arrhenius of the Scripps Institute of Oceanography argued that planetesimals that smacked into the forming Earth got hot enough to melt and release all their volatiles into the atmosphere.

The first to model the steam atmosphere of the early Earth were Yutaka Abe and Takafumi Matsui of the University of Tokyo in 1985. "They were mainly interested in the physics of the problem," Fegley said, "and whether greenhouse gases acting as a thermal blanket would keep the surface molten. I think we're the first ones to do a detailed chemistry on it."

Fegley and Lodders looked particularly at magnesium, silicon and iron, the three most abundant elements in material that combine with oxygen to form rock -- both on Earth and the other terrestrial planets and probably on exoplanets orbiting stars with a composition like our sun's.

The rocky elements enter the atmosphere as hydroxides (Si(OH)4, Fe(OH)2, and Mg (OH)2). Because these oxides have different solubilities in steam, cooking a planet in steam can change its major-element chemistry.

"Potassium, for example, easily goes into steam and if it's lost, you'll lose its radioactive isotope and so change the heat production on the planet," Fegley said.

"If you dissolve more silicon than magnesium, and some of the atmosphere is lost, you can change the ratio of these elements in the planets. This might explain why the ratio of silicon to magnesium in the Earth is about 15 percent smaller than the ratio in the sun, even though the two formed from the same interstellar cloud," he said.

"If you boil off a lot of the silicon, you might end up with a much denser planet than you'd expect. We've found some pretty dense exoplanets," Fegley said. "Sometimes it's crazy high. Earth is about 5.51 g/cm3, but Corot-7b is closer to 10 g/cm3 . . . high enough that it's kind of hard to explain.

"And if you don't lose the atmosphere, when the atmosphere cools down, the rock-forming elements would precipitate out. Since silicon is the rocky element most soluble in steam, it will be the most abundant, and you'll get a silicate-rich-crust ready-made," he said.

What to look for

Although the scientists are experimenting with numerical models, they remark that their conclusions are testable by observation.

"We're hoping astrophysicists doing mass/radius diagrams to figure out the internal composition of planets will consider compositions other than Earth's," Fegley said.

"We're also hoping space-based spectrometers will be trained on the hot, rocky planets. Astrophysicists see silicon, magnesium and sodium coming off the atmospheres of hot Jupiters and hot Neptunes but not yet off of hot rocks, which are dimmer and harder to observe," Fegley said.

Intense ultraviolet light from nearby stars is likely to break up hydroxide molecules at the top of atmospheres, the scientists said. The "photoproducts" of these reactions, such as monatomic gases of aluminum, calcium, iron, magnesium and silicon, might be easier to see both because of their abundances and because their spectral lines are less likely be masked by other emissions.