Venus has an “electric wind” strong enough to remove the components of water from its upper atmosphere, which may have played a significant role in stripping Earth’s twin planet of its oceans, according to new results from ESA’s (European Space Agency) Venus Express mission by NASA-funded researchers.

“It’s amazing, shocking,” said Glyn Collinson, a scientist at NASA’s Goddard Space Flight Center in Greenbelt, Maryland. “We never dreamt an electric wind could be so powerful that it can suck oxygen right out of an atmosphere into space. This is something that has to be on the checklist when we go looking for habitable planets around other stars.” Collinson is lead author of a paper about this research published June 20, 2016, in the journal Geophysical Research Letters.

The space environment around a planet plays a key role in determining what molecules exist in the atmosphere — and whether the planet is habitable for life. New NASA research shows that the electric fields around Venus helped strip its atmosphere of the components needed to make water.

Venus is in many ways the most like Earth in terms of its size and gravity, and there’s evidence that it once had oceans worth of water in its distant past. However, with surface temperatures around 860 F (460 C), any oceans would have long since boiled away to steam and Venus is uninhabitable today. Yet Venus’ thick atmosphere, about 100 times the pressure of Earth’s, has 10,000 to 100,000 times less water than Earth’s atmosphere. Something had to remove all that steam, and the current thinking is that much of the early steam dissociated to hydrogen and oxygen: the light hydrogen escaped, while the oxygen oxidized rocks over billions of years. Also the solar wind — a million-mile-per-hour stream of electrically conducting gas blowing from the sun — could have slowly but surely eroded the remainder of an ocean’s worth of oxygen and water from Venus’ upper atmosphere.

“We found that the electric wind, which people thought was just one small cog in a big machine, is in fact this big monster that’s capable of sucking the water from Venus by itself,” said Collinson.

This graphic compares surface temperatures and gravity on Earth and Venus. The two planets are similar sizes and have similar gravity — but Venus is bone dry, and its average surface temperature in Fahrenheit is more than 10 times higher than Earth's. Recent NASA research describes a key process that removes water from the Venusian atmosphere. 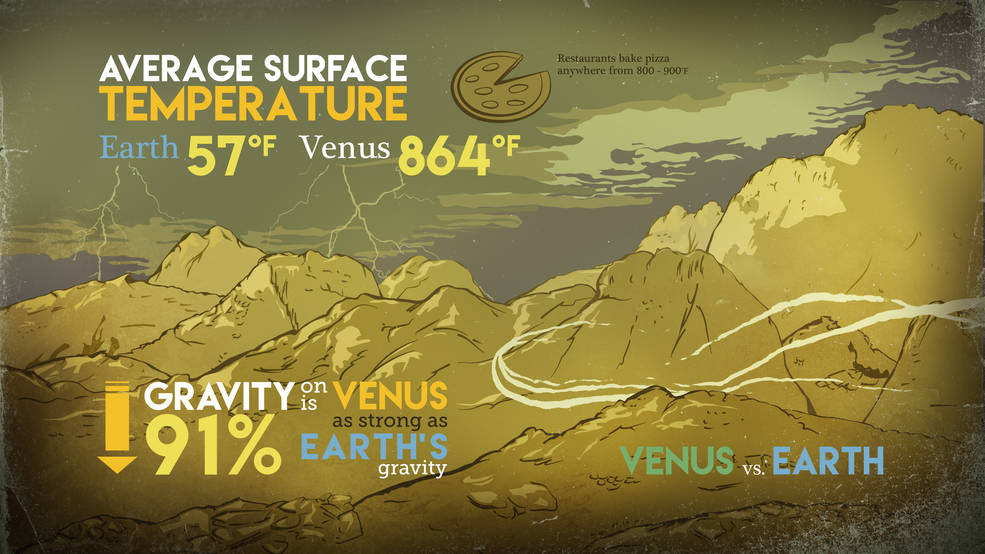 Just as every planet has a gravity field, it is believed that every planet with an atmosphere is also surrounded by a weak electric field. While the force of gravity is trying to hold the atmosphere on the planet, the electric force (the same force that sticks laundry together in a drier and pushes electricity through wires) can help to push the upper layers of the atmosphere off into space. At Venus, the much faster hydrogen escapes easily, but this electric field is so strong that it can accelerate even the heavier electrically charged component of water — oxygen ions — to speeds fast enough to escape the planet’s gravity. When water molecules rise into the upper atmosphere, sunlight breaks the water into hydrogen and oxygen ions, which are then carried away by the electric field.

“If you were unfortunate enough to be an oxygen ion in the upper atmosphere of Venus then you have won a terrible, terrible lottery,” said Collinson, “You and all your ion friends will be dragged off kicking and screaming into space by an invisible hand, and nothing can save you.”

The team discovered Venus’ electric field using the electron spectrometer, a component of the ASPERA-4 instrument, aboard the ESA Venus Express. They were monitoring electrons flowing out of the upper atmosphere when it was noticed that these electrons were not escaping at their expected speeds. The team realized that these electrons had been tugged on by Venus’ potent electric field. By measuring the change in speed, the team was able to measure the strength of the field, finding it to be much stronger than anyone had expected, and at least five times more powerful than at Earth.

“We don’t really know why it is so much stronger at Venus than Earth,” said Collinson, “but, we think it might have something to do with Venus being closer to the sun, and the ultraviolet sunlight being twice as bright. It’s a challenging thing to measure and even at Earth to date all we have are upper limits on how strong it might be.”

This graphic compares the atmospheric composition and electric field strength on Earth and Venus. New research suggests that the electric field around Venus may be a key factor in shaping what molecules exist in the Venusian atmosphere — including its lack of the molecules needed to make water. 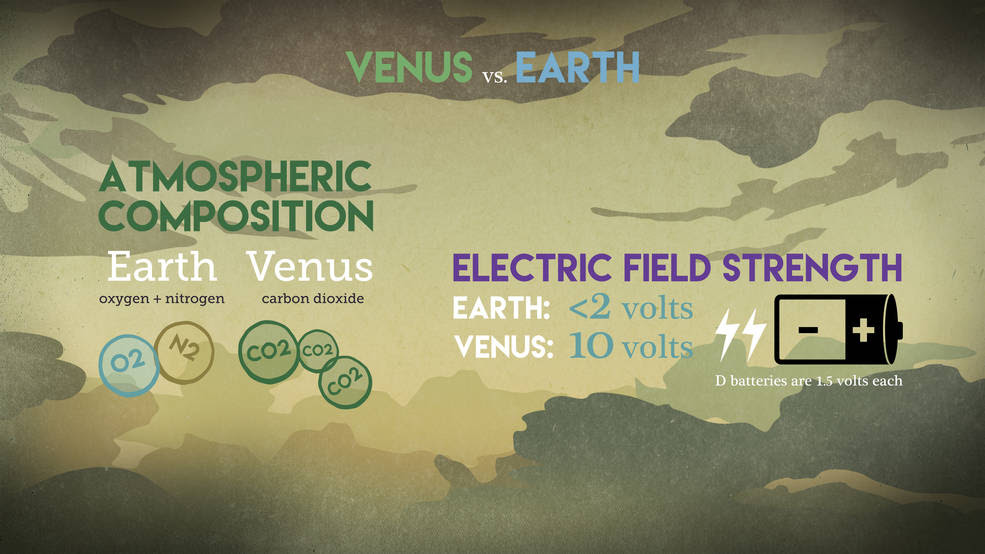 Such information also helps us understand other worlds around the solar system.

“We’ve been studying the electrons flowing away from Titan [a moon of Saturn] and Mars as well as from Venus, and the ions they drag away to space,” said Andrew Coates, who leads the electron spectrometer team at University College London in the U.K. “The new result here shows that the electric field powering this escape is surprisingly strong at Venus compared to the other objects. This will help us understand how this universal process works.”

Another planet where the electric wind may play an important role is Mars. NASA’s MAVEN mission is currently orbiting Mars to determine what caused the Red Planet to lose much of its atmosphere and water. “We are actively hunting for Mars’ electric wind with MAVEN’s full arsenal of scientific instruments,” said Collinson. “MAVEN is a robotic detective on this four-billion-year-old mystery of where the atmosphere and oceans went, and the electric wind has long been a prime suspect.”

This is an artist's concept of the electric wind at Venus. Rays represent the paths that oxygen and hydrogen ions take as they are pulled out of the upper atmosphere. 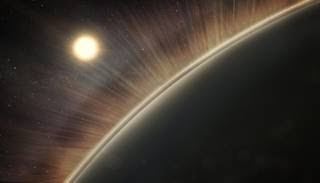 Taking the electric wind into account will also help astronomers improve estimates of the size and location of habitable zones around other stars. These are areas where the temperature could allow liquid water to exist on the surface of alien worlds, making them places where life might be found. Some stars emit more ultraviolet light than the sun, so if this creates stronger electric winds in any planets orbiting them, the habitable zone around such stars may be farther away and narrower than thought. “Even a weak electric wind could still play a role in water and atmospheric loss at any planet,” said Alex Glocer of NASA Goddard, a co-author on the paper. “It could act like a conveyor belt, moving ions higher in the ionosphere where other effects from the solar wind could carry them away.”

ESA’s Venus Express was launched on Nov. 9, 2005, to study the complex atmosphere of Venus. The electron spectrometer was built by the Southwest Research Institute in San Antonio, Texas, and is led by University College London. The spacecraft orbited Venus between 2006 and December 2014. After a successful mission that far exceeded its planned life, the spacecraft exhausted its fuel supply and burned up upon entry into Venus’ dense atmosphere. The research was funded by NASA’s MAVEN (Mars Atmosphere and Volatile Evolution) mission and NASA’s Solar System Workings program.