The Universe Is Getting Cleaner as Stars Sweep Up Cosmic Dust

The Universe is becoming gradually cleaner as more and more cosmic dust is being mopped up by the formation of stars within galaxies, an international team of astronomers has revealed.

Peering back 12 billion years using the Herschel space telescope to produce far-infrared images of the sky, the team led by researchers at Cardiff University has been able to observe the very early formation of galaxies and compare them to galaxies that have formed much more recently.

The results showed that stars were forming inside galaxies much faster in the past compared to today, and that this rapid star birth is using up more and more of the cosmic dust that is ubiquitous in the Universe.

Cosmic dust is comprised of tiny solid particles that are found everywhere in space between the stars. The dust and the gas in the universe is the raw material out of which stars and galaxies form.

A small glimpse of one region, a tenth of the full area of the Herschel ATLAS images. Everything in this image, apart from the picture of the moon, which has just been placed there to show the area of sky covered by the survey and the small square that shows the area covered by the Hubble Deep Field, consists of far-infrared emission from cosmic dust. 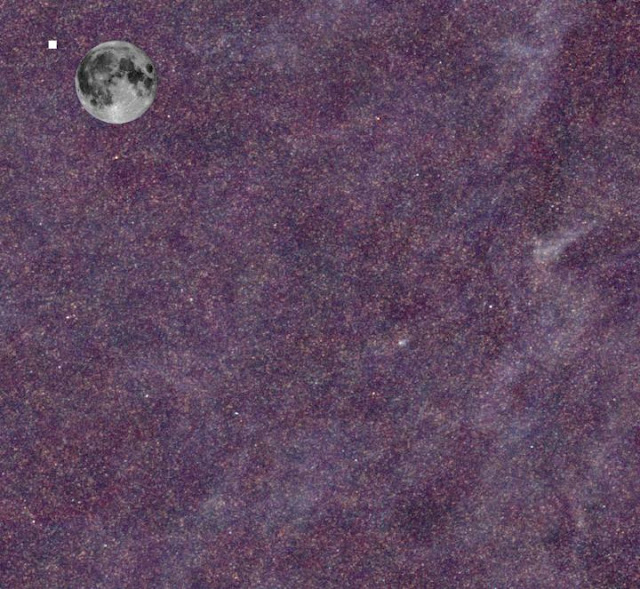 Credit: The Herschel ATLAS team and the European Space Agency

Though this blanket of material is key to the formation of stars and galaxies, it also acts as a sponge, absorbing almost half of the light emitted by stellar objects and making them impossible to observe with standard optical telescopes.

With the launch of the Herschel space telescope in 2009, researchers were provided with the perfect tool for probing this hidden universe. Owing to a collection of sensitive instruments, mirrors and filters, the Herschel telescope had the capacity to detect the dust through the far-infrared emission it emits, revealing the existence of stars and galaxies hidden by the dust.

Professor Steve Eales, a co-leader of the project from Cardiff University's School of Physics and Astronomy, said: "We were surprised to find that we didn't need to look far in the past to see signs of galaxy evolution. Our results show that the reason for this evolution is that galaxies used to contain more dust and gas in the past, and the universe is gradually becoming cleaner as the dust is used up."

Professor Haley Gomez, also of the School of Physics and Astronomy, presented the team's results today, 29 June, at the National Astronomy Meeting in Nottingham. After seven years of work analysing the images from the Herschel telescope, the team of over 100 astronomers have released a large catalogue of the sources of far-infrared radiation in this 'hidden universe'.

The team's survey of the sky, called the Herschel Astrophysical Terahertz Large Area Survey (Herschel ATLAS), has revealed the details of over half a million galaxies, many of which have been viewed as they were over 12 billion years ago, just shortly after the big bang.

The team are hopeful that this unprecedented catalogue of sources will be vital tools for astronomers wishing to understand the detailed history of galaxies and the wider cosmos.

Dr Elisabetta Valiante, a lead author from Cardiff University's School of Physics and Astronomy, said: "The exciting thing about our survey is that it encompasses almost all of cosmic history, from the violent star-forming systems full of dust and gas in the early universe, that are essentially galaxies in the process of formation, to the much more subdued systems we see around us today."

Dr Loretta Dunne, a co-leader of project from Cardiff University's School of Physics and Astronomy, said: "Before Herschel we only knew of a few hundred such dusty sources in the distant universe and we could only effectively 'see' them in black and white. Herschel, with its five filters, has given us the equivalent of technicolour, and the colour of the galaxy tell us about their distances and temperatures. So we now have half a million galaxies we can use to map out the hidden star formation in the universe."