The GTC Obtains the Deepest Image of a Galaxy from Earth

The telescope on La Palma produces an image 10 times deeper than any other taken from a ground-based telescope and observes the faint stellar halo of one of our neighboring galaxies, which supports the presently accepted model of galaxy formation.

Observing very distant objects in the universe is a challenge because the light which reaches us is extremely faint. Something similar occurs with objects which are not so distant but have very low surface brightness. Measuring this brightness is difficult due to the low contrast with the sky background. Recently a study led by the Instituto de Astrofísica de Canarias (IAC) set out to test the limit of observation which can be reached using the largest optical-infrared telescope in the world: the Gran Telescopio CANARIAS (GTC). 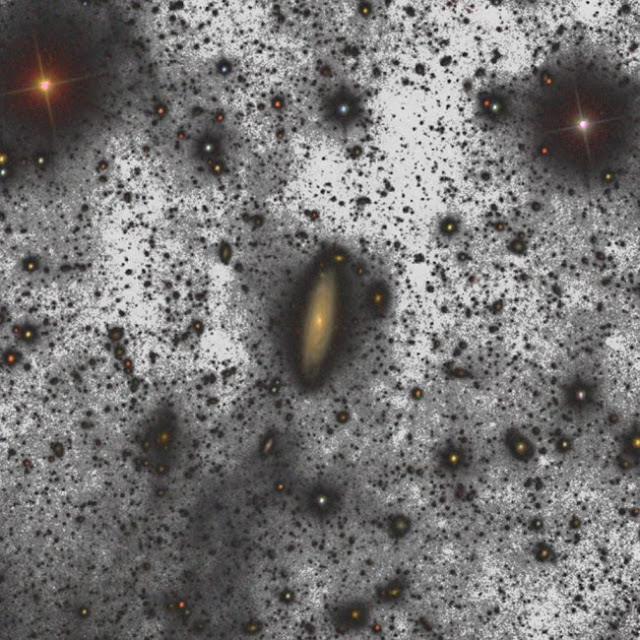 The observers managed to obtain an image 10 times deeper than any other obtained from the ground, observing a faint halo of stars around the galaxy UGC0180, which is 500 million light years away from us. With this measurement, recently published in the specialized journal Astrophysical Journal the existence of the stellar halos predicted by theoretical models is confirmed, and it has become possible to study low surface brightness phenomena.

The currently accepted model for galaxy formation predicts that there are many stars in their outer zones, which form a stellar halo, and is the result of the destruction of other minor galaxies. The problem about this is that these halos consist of very few stars in a very large volume. For example in the Milky Way the fraction of stars in its halo is about 1% of the total number of stars in the galaxy, but distributed within a large volume, several times bigger than the rest of the Galaxy. This means that the surface brightness of galaxy halos is extremely low, and only a few of them have been studied even in nearby galaxies. Because of this difficulty the scientists had questioned the possibility of observing further away and obtaining ultra-deep images, even though technological development has provided us with bigger and bigger telescopes capable of exploring the surface brightness of fainter and fainter galaxies.

For their recent experiment the observers used the GTC, which is at the Roque de los Muchachos Observatory in Garafía, (La Palma, Canary Islands). They chose the galaxy UGC00180, which is quite similar to our neighbour, the Andromeda Galaxy, and to other galaxies to which they have references, and they used the OSIRIS camera on the GTC, which has a field big enough to cover a decent area of sky around the galaxy, in order to explore its possible halo. After 8.1 hours of exposure they could show that it does have a weak halo composed of four thousand million stars, about the same number as those in the Magellanic Clouds, which are satellite galaxies of the Milky Way.

As well as beating the previous surface brightness limit by a factor of ten, this observation shows that it will be possible to explore the universe not only to the same depth to which we can go using the conventional technique of star counts, but also out to distances where this cannot be achieved, (UGC00180 is 200 times further away than Andromeda).

Another advantage is that this new technique can be used to explore other faint structures in the sky, whether they contain stars or not. "After showing that the technique works" says Ignacio Trujillo, a researcher at the IAC and the first author of the study, " the object of future research is to extend the study to other types of galaxies, to see whether this way of understanding their formation, predicted by the standard model, is correct or not".