Crowdsourcing is used for everything from raising funds to locating the best burger in town. The practice of enlisting a large group of people to provide a service, information or a contribution to a project--most often via the internet--is a defining feature of our era.

Though the term crowdsourcing was coined in 2005 by Wired Magazine editors to describe how businesses were outsourcing work, one of crowdsourcing's earliest uses was for science. A plea from Yale science professor Denison Olmsted--published in a newspaper article in 1833--asked the public to send in their observations about a major meteor storm. Olmsted then used the information to make significant advances in our understanding of the nature of such storms.

This is an artist's impression of the simultaneous stellar eclipse and planetary transit events on Kepler-1647. Such a double eclipse event is known as a syzygy. 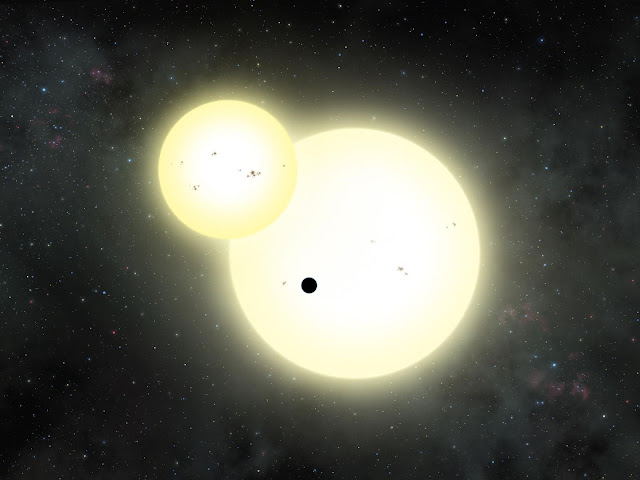 Now Lehigh University astronomer assistant professor of physics Joshua Pepper is using crowdsourcing to gather observations worldwide--and the information is being used to verify the discovery of new planets. His network-- known as the "KELT Follow-Up Network"--is made up of nearly 40 members in 10 countries across 4 continents. The group--the largest, most coordinated network of its kind--contributed key observations to confirm the existence of the recently-identified planet, Kepler-1647 b.

Lehigh University astronomer assistant professor of physics Joshua Pepper leads the "KELT Follow-Up Network." Made up of nearly 40 members in 10 countries across 4 continents, it is the largest, most coordinated network of its kind. 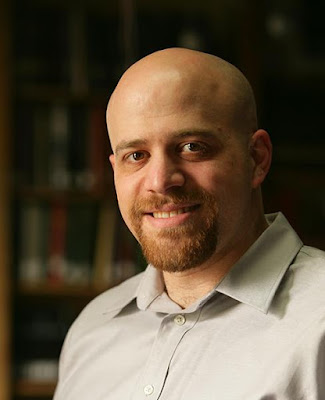 The new planet was discovered by a team at NASA's Goddard Space Flight Center and San Diego State University used the Kepler Space Telescope. The discovery was announced today in San Diego, at a meeting of the American Astronomical Society. The research has been accepted for publication in the Astrophysical Journal with Veselin Kostov, a NASA Goddard postdoctoral fellow, as lead author.

Planets that orbit two stars are known as circumbinary planets, or sometimes "Tatooine" planets, after Luke Skywalker's homeland in "Star Wars." Using NASA's Kepler telescope, astronomers search for slight dips in brightness that hint a planet might be transiting in front of a star, blocking a small portion of the star's light.

"But finding circumbinary planets is much harder than finding planets around single stars," said SDSU astronomer William Welsh, one of the paper's coauthors. "The transits are not regularly spaced in time and they can vary in duration and even depth."

This is a bird's eye view comparison of the orbits of the Kepler circumbinary planets. Kepler-1647 b's orbit, shown in red, is much larger than the other planets (shown in gray). For comparison, the Earth's orbit is shown in blue. 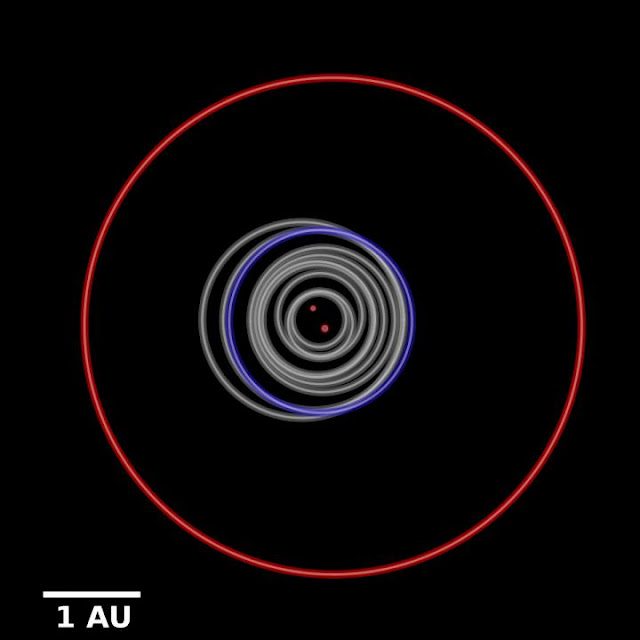 To help verify what they had seen, the researchers made use of the worldwide network of professional and amateur astronomers that Pepper--a coauthor on the paper--had created.

"Most members of our network have small telescopes that are not able to observe distant galaxies--but they are very well-suited to observing bright stars, like the ones Kepler-1647 b is orbiting," said Pepper.

The two network astronomers whose observations helped researchers to estimate the mass of the new planet are Eric L.N. Jensen, professor of astronomy at Swarthmore College and Joao Gregorio, an amateur astronomer in Portugal--both listed as co-authors on the paper.

"It's really exciting for me to be part of this discovery, since I've been working on this problem for a long time, said Professor Jensen. "As a graduate student in the early 1990s, I studied dusty disks around young binary stars. We thought that such disks should form planets, but that was before any planets had been discovered outside the solar system, so it was just speculation at that point. I never thought that one day I would help discover a circumbinary planet."

"As an amateur being involved in the KELT follow-up network giving my contribution to the discovery of 'new worlds' is amazing--I'm very proud to be able to contribute," said Mr. Gregorio.

Kepler-1647 is 3700 light-years away and approximately 4.4 billion years old, roughly the same age as the Earth. The stars are similar to the Sun, with one slightly larger than our home star and the other slightly smaller. The planet has a mass and radius nearly identical to that of Jupiter, making it the largest transiting circumbinary planet ever found.

"It's a bit curious that this biggest planet took so long to confirm, since it is easier to find big planets than small ones", said SDSU astronomer Jerome Orosz, another coauthor on the study. "But it is because its orbital period is so long."

The planet takes 1,107 days (just over 3 years) to orbit its host stars, the longest period of any confirmed transiting exoplanet found so far. The planet is also much further away from its stars than any other circumbinary planet, breaking with the tendency for circumbinary planets to have close-in orbits. Interestingly, its orbit puts the planet within the so-called habitable zone. Like Jupiter, however, Kepler-1647 b is a gas giant, making the planet unlikely to host life. Yet if the planet has large moons, they could potentially be suitable for life.

"Habitability aside, Kepler-1647 b is important because it is the tip of the iceberg of a theoretically predicted population of large, long-period circumbinary planets", Welsh said.

The "KELT Follow up Network" was originally assembled to assist Pepper and his colleagues in identifying exoplanets for a project he founded called the Kilodegree Extremely Little Telescope (KELT) survey. It uses two robotic programmable telescopes, one in Arizona calledKELT North and the other in South Africa known as KELT South.

The survey has confirmed 15 exoplanets using the transit method. Lehigh, Vanderbilt University and Ohio State run the KELT project together, and the project's low-resolution telescopes are dwarfed by other telescopes that have apertures of several meters in order to stare at tiny sections of the sky at high resolution. The wide-angle KELT view of the universe, by contrast, comes from a mere 4.5-centimeter aperture with a high-quality digital camera and lens assembly that captures the light of 100,000 stars with each exposure.

"The goal of KELT is to discover more planets that are transiting the brightest stars we can see. In essence, those give us the very rare, very valuable planets," Pepper says.