A single entry of the plague bacterium into Europe was responsible for the Black Plague of the mid-14th century. This same strain sparked recurrent outbreaks on the continent over the following four centuries before spreading to China, where it triggered the third plague pandemic in the late 19th century. The wave of plague that traveled to Asia later became the source population for modern-day epidemics around the globe. The bacterium's routes over time were revealed by genome analyses published June 8, 2016 in Cell Host & Microbe.

This is a photo of a mass burial site in Ellwangen, Germany. 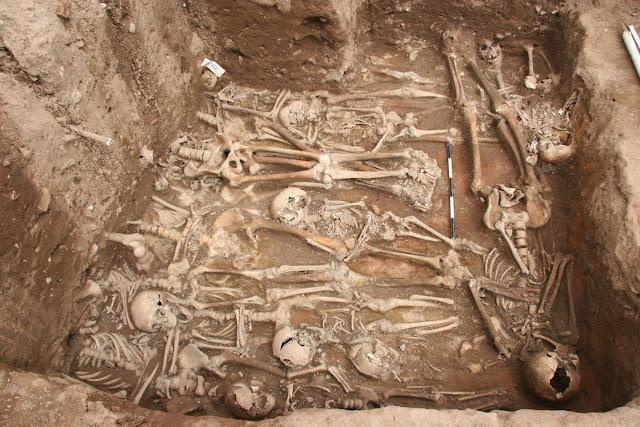 "Our study is the first to provide genetic support for plague's travel from Europe into Asia after the Black Death, and it establishes a link between the Black Death in the mid-14th century and modern plague," says first author Maria Spyrou of the Max Planck Institute for the Science of Human History.

The plague bacterium, Yersinia pestis, is one of the deadliest pathogens in human history, sparking three major pandemics: the Plague of Justinian, which struck the Roman Empire during the 6th and 8th centuries; the second plague pandemic, which first erupted in Europe in the mid-14th-century Black Death and continued to strike the continent in recurrent outbreaks until the mid-18th century; and the third plague pandemic, which emerged in China during the late 19th century.

Evidence based on ancient DNA samples and historical climate patterns has suggested that the recurrent outbreaks of the second pandemic were caused by multiple reintroductions ofYersinia pestis into Europe, most likely from Asia. Moreover, some scientists have recently suggested that the plague bacterium migrated from Europe to Asia after the Black Death, later giving rise to the third pandemic. But until now, genomic evidence to support this model was missing.

To shed light on the origin and path of the second pandemic, Spyrou and co-senior study authors Alexander Herbig, Kirsten Bos, and Johannes Krause of the Max Planck Institute for the Science of Human History collected samples from plague-infected individuals buried in mass grave sites in Barcelona, Spain, and Ellwangen, Germany, as well as a single grave in Bolgar City, Russia.

"The mass burials where our samples come from often represent events where hundreds of people died of plague during a single outbreak," Herbig says. "This gives us an impression about how significant the impact of this disease was during medieval times."

This visual abstract depicts the findings of Spyrou et al., who sequenced historical Yersinia pestisgenomes from victims of the Black Death and subsequent outbreaks in Europe. Their data suggest a connection between the Black Death and the modern-day plague pandemic as well as the persistence of plague in Europe between the 14th and 18th centuries. 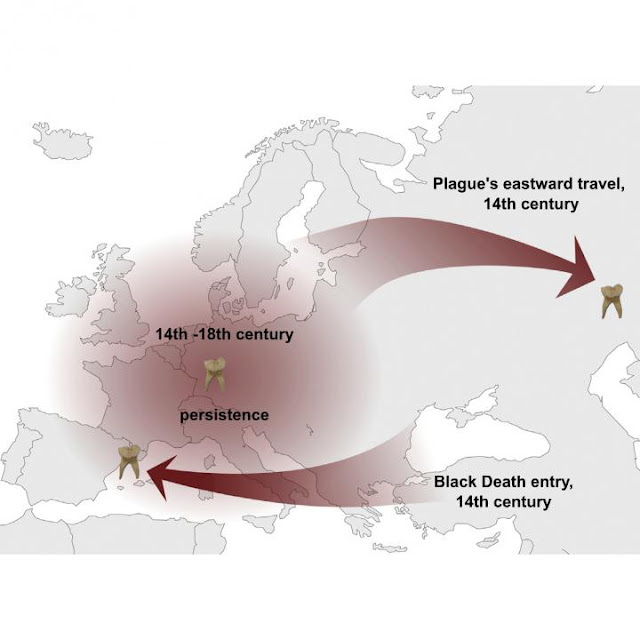 The Bolgar City site was dated to the second half of the 14th century using coin artifacts known to have been minted after 1362. Radiocarbon dates from bone fragments and tooth roots were estimated at 1300-1420 for Barcelona, 1298-1388 for Bolgar City, and 1486-1627 for Ellwangen.

The phylogenetic analysis revealed no differences between their Black Death strain from Barcelona and previously genotyped strains from mid-14th-century London. The simultaneous presence of the same strain in both southern and northern Europe suggests that Y. pestis entered the continent in a single wave rather than through multiple pulses during the Black Death.

These Black Death strains from London and Barcelona gave rise to a branch containing the Ellwangen strain and previously sequenced 18th-century strains from the Great Plague of Marseille in France. Moreover, all three newly reconstructed genomes and previously sequenced genomes from the second plague grouped together in the same branch on the phylogenetic tree. Taken together, these findings suggest that a single Y. pestis lineage was responsible for the Black Death and subsequent second pandemic outbreaks throughout Europe.

Meanwhile, the Bolgar City strain shared similarities with the Black Death London strain as well as all modern strains. This finding supports the idea that one Y. pestis lineage traveled from Europe to Asia after the Black Death, later sparking the third pandemic and modern-day epidemics worldwide.

"Our most significant finding revealed a link between the Black Death and modern plague," Krause says. "Though several plague lineages exist in China today, only the lineage that caused the Black Death several centuries earlier left Southeast Asia in the late 19th century pandemic and rapidly achieved a near worldwide distribution."

In future studies, the researchers plan to gain additional insights into the entry and end points of the Black Death in Europe. They hope to expand their sample range and explore these regions further to better understand the route traveled by the disease, the evolutionary changes it acquired at different stages, and the toll it had on the human population.

The authors acknowledge the following sources of funding: the European Research Council, the Social Sciences and Humanities Research Council of Canada, the Maison des Sciences de l'Homme d'Aquitaine, the French Research National Agency, the Russian Government Program of Competitive Growth of Kazan Federal University, and the Regional Foundation of Revival of Historical and Cultural Monuments of the Republic of Tatarstan.

"We hope that our findings will highlight the importance for more extensive sampling and sequencing of both ancient and modern plague isolates around the world, and open up new research themes regarding the role played by Europe and West Asia in plague's evolution and ecology," Bos says.