Hydrogen is the most-abundant element in the universe. It's also the simplest--sporting only a single electron in each atom. But that simplicity is deceptive, because there is still so much we have to learn about hydrogen.

One of the biggest unknowns is its transformation under the extreme pressures and temperatures found in the interiors of giant planets, where it is squeezed until it becomes liquid metal, capable of conducting electricity. New work published in Physical Review Letters by Carnegie's Alexander Goncharov and University of Edinburgh's Stewart McWilliams measures the conditions under which hydrogen undergoes this transition in the lab and finds an intermediate state between gas and metal, which they're calling "dark hydrogen."

On the surface of giant planets like Jupiter, hydrogen is a gas. But between this gaseous surface and the liquid metal hydrogen in the planet's core lies a layer of dark hydrogen, according to findings gleaned from the team's lab mimicry. 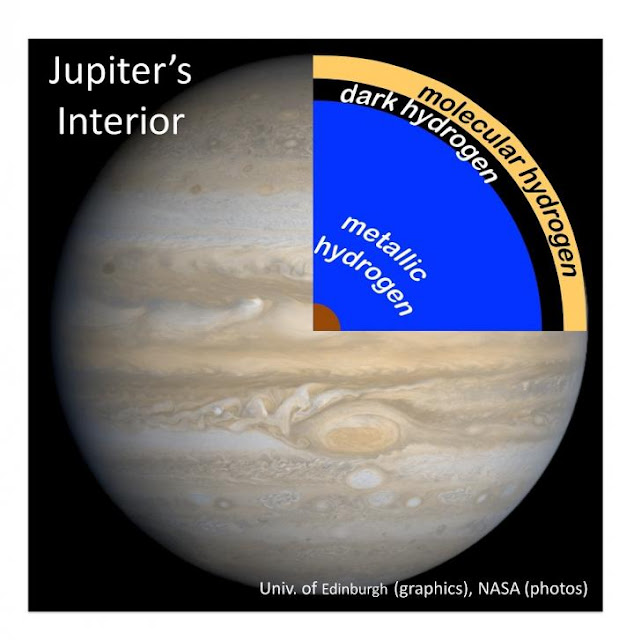 Using a laser-heated diamond anvil cell to create the conditions likely to be found in gas giant planetary interiors, the team probed the physics of hydrogen under a range of pressures from 10,000 to 1.5 million times normal atmospheric pressure and up to 10,000 degrees Fahrenheit.

They discovered this unexpected intermediate phase, which does not reflect or transmit visible light, but does transmit infrared radiation, or heat.

"This observation would explain how heat can easily escape from gas giant planets like Saturn," explained Goncharov.

They also found that this intermediate dark hydrogen is somewhat metallic, meaning it can conduct an electric current, albeit poorly. This means that it could play a role in the process by which churning metallic hydrogen in gas giant planetary cores produces a magnetic field around these bodies, in the same way that the motion of liquid iron in Earth's core created and sustains our own magnetic field.

"This dark hydrogen layer was unexpected and inconsistent with what modeling research had led us to believe about the change from hydrogen gas to metallic hydrogen inside of celestial objects," Goncharov added.


Contacts and sources:
Alexander Goncharov
The Carnegie Institution for Science
on June 23, 2016