Chiral molecules—compounds that come in otherwise identical mirror image variations, like a pair of human hands—are crucial to life as we know it. Living things are selective about which "handedness" of a molecule they use or produce. For example, all living things exclusively use the right-handed form of the sugar ribose (the backbone of DNA), and grapes exclusively synthesize the left-handed form of the molecule tartaric acid. While homochirality—the use of only one handedness of any given molecule—is evolutionarily advantageous, it is unknown how life chose the molecular handedness seen across the biosphere.

Now, Caltech researchers have detected, for the first time, a chiral molecule outside of our solar system, bringing them one step closer to understanding one of the most puzzling mysteries of the early origins of life.

Though chiral compounds have been discovered in meteorites and comets, propylene oxide (A) is the first such molecule to be detected beyond the solar system. A Caltech-led team has used radio telescopes to observe propylene oxide in the cold material surrounding a cluster of protostars near the center of our galaxy, pictured from Mauna Kea (B). Radiation in such young stellar clusters (C) can further process chiral molecules, even as they are incorporated into fledgling planetary systems (D). 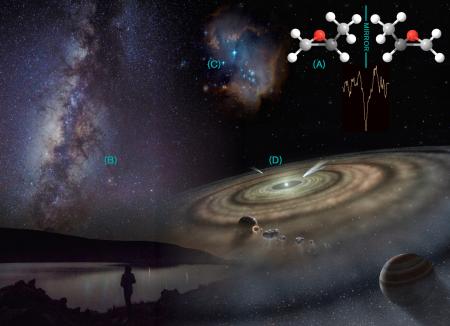 A paper about the work appears in the June 17 issue of the journal Science.

The different forms, or enantiomers, of a chiral molecule have the same physical properties, such as the temperatures at which they boil and melt. Chemical interactions with other chiral species, however, can vary greatly between enantiomers. For instance, many chiral pharmaceutical chemicals are only effective in one handedness; in the other, they can be toxic.

"Homochirality is one of the most interesting properties of life as we know it," says Geoffrey Blake (PhD '86), professor of cosmochemistry and planetary sciences and professor of chemistry. "How did it come to be that all living things use one enantiomer of a particular amino acid, for example, over another? If we could run the tape of life again, would the same enantiomers be selected through a deterministic process, or is a random choice made that depends on a tiny imbalance of one handedness over the other? If there is life elsewhere in the universe, based on the biochemistry we know, will it use the same enantiomers?"

To help answer these questions, Blake and his colleagues at the National Radio Astronomy Observatory (NRAO) searched one particular molecular cloud, called Sagittarius B2(N), for chiral molecules. The team used the Green Bank Telescope Prebiotic Interstellar Molecular Survey (PRIMOS) of Sagittarius B2(N). The PRIMOS project, led by co-senior author Anthony Remijan of the NRAO, examines the spectrum of Sagittarius B2(N) across a broad range of radio frequencies. Every gas-phase molecule can only tumble in specific ways depending on its size and shape, giving it a unique rotational spectrum —like a fingerprint—that makes it readily identifiable in the PRIMOS survey.

The PRIMOS data revealed the signature of a chiral molecule called propylene oxide (CH3CHOCH2); follow-up studies with the Parkes radio telescope in Australia confirmed the findings. "It's the first molecule detected in space that has the property of chirality, making it a pioneering leap forward in our understanding of how prebiotic molecules are made in space and the effects they may have on the origins of life," says Brandon Carroll, co-first author on the paper and a graduate student in Blake's group. "While the technique we used does not tell us about the abundance of each enantiomer, we expect this work to enable future observations that will let us understand a great deal more about chiral molecules, the origins of homochirality, and the origins of life in general."

Propylene oxide is a useful molecule to study because it is relatively small compared to biomolecules such as amino acids; larger molecules are more difficult to detect with radio astronomy, but have been seen in meteorites and comets formed at the birth of the solar system. Though propylene oxide is not utilized in living organisms, its presence in space is a signpost for the existence of other chiral molecules.

"The next step is to detect an excess of one enantiomer over the other," says Brett McGuire (PhD '15), an NRAO Jansky Fellow and former member of the Blake lab, who shares first authorship on the work with Carroll. "By discovering a chiral molecule in space, we finally have a way to study where and how these molecules form before they find their way into meteorites and comets, and to understand the role they play in the origins of homochirality and life."

"The past few years of exoplanetary science have told us there are millions of solar system-like environments in our galaxy alone, and thousands of nearby young stars around which planets are being born," says Blake. "The detection of propylene oxide, and the future projects it enables, lets us begin to ask the question—does interstellar prebiotic chemistry plant the primordial cosmic seeds that determine the handedness of life?"

Additional coauthors on the paper, titled "Discovery of the interstellar chiral molecule propylene oxide (CH3CHOCH2)," include Caltech graduate student Ian Finneran, a member of the Blake group. The work is supported by the National Science Foundation Astronomy and Astrophysics and Graduate Fellowship grant programs and the NASA Astrobiology Institute through the Goddard Team and the Early Career Collaboration award program.