In the first billion years of Earth's history, the planet was bombarded by primordial asteroids, while a faint Sun provided much less heat. A Southwest Research Institute-led team posits that this tumultuous beginning may have ultimately fostered life on Earth, particularly in terms of sustaining liquid water.

"The early impacts caused temporary, localized destruction and hostile conditions for life. But at the same time, they had a long-term beneficial effect in stabilizing surface temperatures and delivering key elements for life as we know it," said Dr. Simone Marchi, a senior research scientist at SwRI's Planetary Science Directorate in Boulder, Colo. He is the lead author of a paper, "Massive Impact-induced Release of Carbon and Sulfur Gases in the Early Earth's Atmosphere," recently published in the journal Earth and Planetary Science Letters. The paper addresses a major problem, one of the outstanding mysteries in the history of the solar system and Earth -- the faint young Sun paradox.

SwRI scientists created a new model for impact-generated outgassing on the early Earth. A large impact creates a transient high temperature atmosphere. Within a thousand years, the atmosphere condenses, while deep-seated, impact-generated melt spreads across the surface. The model shows how pools of lava could release gases and create a greenhouse effect that warmed the planet.

"Atmospheric and surface conditions during the first billion years of Earth's history are poorly understood due to the scarcity of geological and geochemical evidence," said Marchi. However, ancient zircon crystals in sedimentary rocks provide evidence that our planet had liquid oceans, at least intermittently, during this earliest period. His team created a new model for impact-generated outgassing on the early Earth, showing how a resulting greenhouse effect could have counterbalanced the weak light from the infant Sun enough to sustain liquid water.

The findings could be key to understanding how life started on Earth despite the faint young Sun and havoc caused by collisions. Studies of other stars, as well as theoretical modeling, have shown that Sun-like stars begin their life about 20 to 30 percent fainter in visible wavelengths than the Sun is at present. They gradually increase in luminosity over time.

"Today Earth is in the 'Goldilocks zone,' where liquid water can exist on its surface," said Marchi. Referencing the fairy tale about the three little bears, the Goldilocks zone is an orbit around a star where it's not too hot, nor too cold, for liquid water. Liquid water is generally considered a key ingredient for life. When the Sun was much fainter, the Earth with its present atmospheric composition would have been frozen solid. If the oceans were frozen, life may not have formed.

This artistic illustration shows how the early Earth might have looked under bombardment, with circular impact features dotting the daylight side, while hot lava glows on the night side. A thick, yellowish hazy atmosphere is also present. SwRI scientists created a new model for impact-generated outgassing on the early 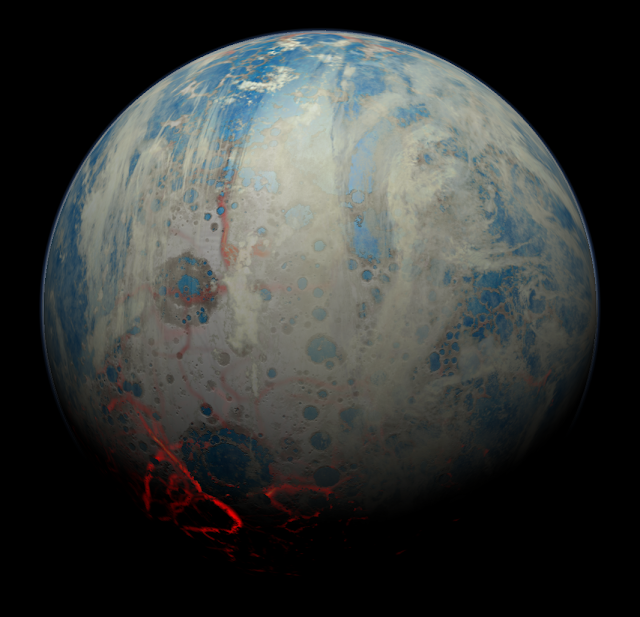 The most straightforward explanation would be a massive atmospheric greenhouse effect, from either carbon dioxide or methane, or both. Previous work has speculated that volcanic outgassing or impact-vaporized materials could have released greenhouse gases. Marchi's team proposes a novel, more efficient mechanism As the planet was pummeled by primordial asteroids -- some larger than 100 kilometers in diameter -- impacts would melt large volumes of rock, creating temporary lakes of lava. These pools of lava could have released large quantities of carbon dioxide to the atmosphere.

"This early heavy bombardment could have been responsible for the large greenhouse effect needed to maintain warmer conditions, which may have been conducive to the early start for life on Earth," said Marchi. "The bombardment also delivered large quantities of sulfur, one of the most important elements for life."