Parallax: When It Comes to Brown Dwarfs, 'How Far?' Is a Key Question

Brown dwarfs are sometimes called failed stars. They're stars' dim, low-mass siblings and they fade in brightness over time. They're fascinating to astronomers for a variety of reasons, but much about them remains unknown. New work from a Carnegie-led team reports the distances of a number of brown dwarfs, as well as low-mass stars, in The Astronomical Journal.

Brown dwarfs are too small to sustain the hydrogen fusion process that powers stars. Their temperatures can range from nearly as hot as a star to as cool as a planet, and their masses also range between star-like and giant planet-like. They are of particular interest to scientists because they can offer clues to star-formation processes.

An artist's conception of a cool brown dwarf. The intrinsic brightness of brown dwarfs, particularly cool brown dwarfs, is poorly known, but this key parameter can only be determined once an object's distance has been measured. Intrinsic brightness is a determination of how bright an object would be if observed at a common distance, eliminating the fact that a bright star can seem dimmer if it is far away and a dim star can seem brighter if it is close.

An ongoing planet-hunting survey run by Carnegie co-authors Alycia Weinberger, Alan Boss, Ian Thompson, Sandy Keiser, and others has yielded the distances to 134 low mass stars and brown dwarfs, of which 38 had not been previously measured.

"Accurate distances are the foundation upon which we can determine the physical properties and luminosities of brown dwarfs and low mass stars," Weinberger said.

The team built a special instrument for precisely measuring the locations of stars over time, the CAPSCam--the Carnegie Astrometric Planet Search Camera--and they use it at the DuPont Telescope at our Las Campanas Observatory in Chile.

The primary goal of the CAPS project is to search for extrasolar planets by the astrometric method, where the planet's presence can be detected indirectly through the wobble of the host star around the center of mass of the system. But CAPSCam also measures parallaxes to stars and brown dwarfs, including the 134 objects published in this study.

An illustration of parallax. 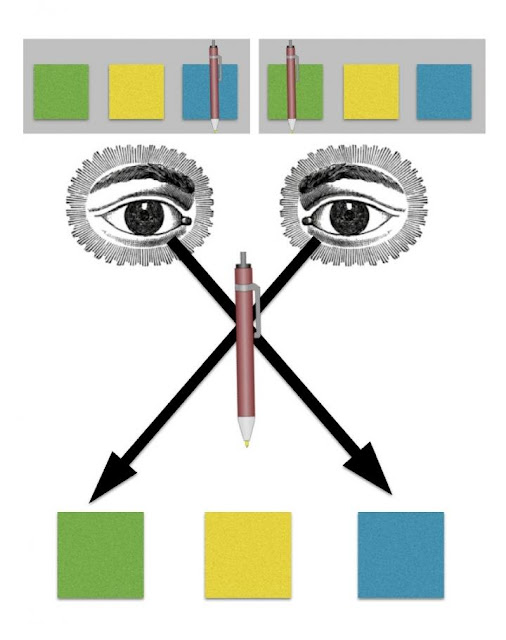 Parallax may sound like a word straight out of science fiction, but it's something you've almost certainly experienced yourself. Hold a pen up in front of your face and look at it first with just your right eye and then just your left eye. It appears to be moving in regard to background objects as you switch from eye to eye, even though you know it isn't moving at all. That's parallax!

What's more, if you hold the pen further from your face, it appears to move less when you switch eyes than it did when it was closer to you. In the same way, closer stars have larger parallactic motion.

What does it have to do with astronomy? It's the only direct way to measure astronomical distances and the CAPSCam is capable of doing so very precisely. By measuring the shift in an object's position from different viewpoints in the Earth's orbit relative to something fixed in the background, astronomers can use geometry to calculate how far away the object is.

"There is still so much about brown dwarfs that remains unknown," explained Weinberger. "As we learn more about them, it could improve our knowledge about the star formation process and possibly also refine our understanding of the distribution of matter in the universe, since it seems that there are far more brown dwarfs than initially thought."

The study revealed some other useful distance measurements in addition to the brown dwarf discoveries.

The team used the motion of two stars and compared them to others in two different stellar groups to confirm the age of the two stars age, between 30 and 50 million years old for one and 100 million years old for the other. This is because distance measurements can tell researchers about the location of a star in 3-D, not just the star's position in 2-D on the sky, and let them measure the star's velocity. Finding groups of young stars moving together lets astronomers study them in aggregate and better estimate how old they are and learn about their evolution.

The team also reported the first parallax for a star that is notable for hosting a Neptune-sized planet. Relatively few giant planets orbiting low-mass stars are known, so every instance is of interest to planet hunters. Using this measurement the team refined the radius and density estimates for the planet, finding it to be about half as dense as Neptune, closer to Saturn's density.

"In 2007, we began our long-term search for gas giant planets and brown dwarfs orbiting nearby low mass dwarf stars," said Boss. "We're excited to have such a wealth of measurements to publish from our CAPSCam project."

The study's other co-authors are: Guillem Anglada-Escude, a former Carnegie fellow now at Queen Mary University of London and Gregory Burley of the National Research Council of Canada.

This work was supported by the National Science Foundation, a NASA Origins of Solar Systems grant, and a NASA Astrobiology grant.

Contacts and sources:
Alycia Weinberger
The Carnegie Institution for Science
on June 27, 2016