Astronomers from Japan, Sweden, the United Kingdom and ESO have used the Atacama Large Millimeter/submillimeter Array (ALMA to observe one of the most distant galaxies known.SXDF-NB1006-2 lies at a redshift of 7.2, meaning that we see it only 700 million years after the Big Bang.

The team was hoping to find out about the heavy chemical elements present in the galaxy, as they can tell us about the level of star formation, and hence provide clues about the period in the history of the Universe known as cosmic reionisation.

This is a color composite image of a portion of the Subaru XMM-Newton Deep Survey Field. The red galaxy at the center of the image is the most distant galaxy, SXDF-NB1006-2. 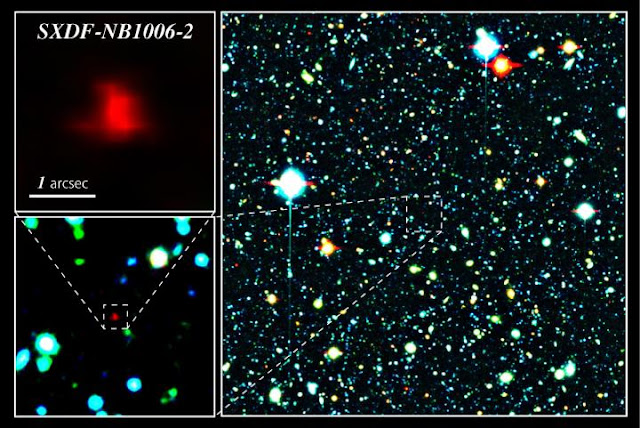 "Seeking heavy elements in the early Universe is an essential approach to explore the star formation activity in that period," said Akio Inoue of Osaka Sangyo University, Japan, the lead author of the research paper, which is being published in the journal Science. "Studying heavy elements also gives us a hint to understand how the galaxies were formed and what caused the cosmic reionisation," he added.

In the time before objects formed in the Universe, it was filled with electrically neutral gas. But when the first objects began to shine, a few hundred million years after the Big Bang, they emitted powerful radiation that started to break up those neutral atoms -- to ionise the gas. During this phase -- known as cosmic reionisation -- the whole Universe changed dramatically. But there is much debate about exactly what kind of objects caused the reionisation. Studying the conditions in very distant galaxies can help to answer this question.


This diagram depicts the major milestones in the evolution of the Universe since the Big Bang, about 13.8 billion years ago. It is not to scale.

The Universe was in a neutral state at 400 thousand years after the Big Bang and remained that way until light from the first generation of stars started to ionize the hydrogen. After several hundred million years, the gas in the Universe was completely ionized.

The universe we know today is abundant with different chemical elements. But at the beginning of the universe, there was only hot, ionized gas filled with electrons and ions of hydrogen and helium buzzing around. After 400,000 years, the universe cooled, and electrons and hydrogen ions combined to form neutral hydrogen atoms. Nothing more happened for several hundreds of millions of years until the first generation of stars were formed, emitting strong radiation that ionized hydrogen once again, also synthesizing other heavier elements such as carbon and oxygen.

Studying these heavy elements from this era provides clues about what triggered reionization, the nature of the first stars, and how galaxies were born. But studying these elements is extremely difficult because it requires astronomers to find objects as far away as possible, something only possible using the best telescopes available today.

One of these includes the Atacama Large Millimeter/submillimeter Array (ALMA) telescope in Chile. In June 2015, a team of researchers including Kavli Institute for the Physics and Mathematics of the Universe (Kavli IPMU) Project Professor Naoki Yoshida, and lead by Osaka Sangyo University Associate Professor Akio Inoue, University of Tokyo Assistant Professor Youichi Tamura and National Astronomical Observatory of Japan Associate Professor Hiroshi Matsuo, targeted SXDF-NB1006-2, a galaxy discovered in 2012 and confirmed by other telescopes as being the most distant galaxy discovered at the time.

This is an artist's concept of SXDF-NB1006-2. Many young bright stars are located in the galaxy and ionize the gas inside and around the galaxy. Green color indicates the ionized oxygen detected by ALMA, whereas purple shows the distribution of ionized hydrogen detected by the Subaru Telescope 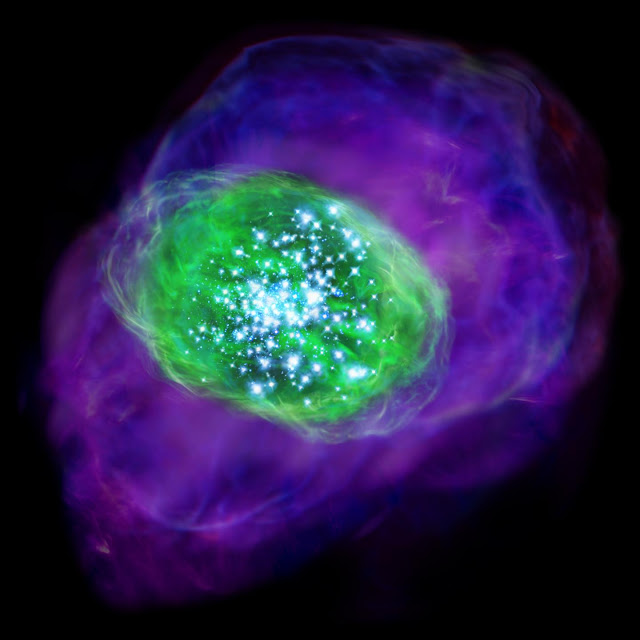 
Earlier in 2014, the team had run large-scale numerical simulations of galaxy formation to conclude that the ALMA telescope would be capable of detecting light from ionized oxygen in SXDF-NB1006-2.

As a result, ALMA detected radiation coming from doubly ionized oxygen. From the light's strength the team also calculated the amount of oxygen in the galaxy is much smaller than that of the Sun.

"Our results showed this galaxy contains one tenth of oxygen found in our Sun. But the small abundance is expected because the universe was still young and had a short history of star formation at that time," said Yoshida.

The team's leader Inoue has suggested the lack of dust could be an indication that almost all the gas in the galaxy is highly ionized.

"SXDF-NB1006-2 would be a prototype of the light sources responsible for the cosmic reionization," said Inoue.

"This is the first step to understanding what kind of objects caused cosmic reionization," added Tamura.

The detection of ionised oxygen indicates that many very brilliant stars, several dozen times more massive than the Sun, have formed in the galaxy and are emitting the intense ultraviolet light needed to ionise the oxygen atoms.

The lack of dust in the galaxy allows the intense ultraviolet light to escape and ionise vast amounts of gas outside the galaxy. "SXDF-NB1006-2 would be a prototype of the light sources responsible for the cosmic reionisation," said Inoue.

"This is an important step towards understanding what kind of objects caused cosmic reionisation," explained Yoichi Tamura of the University of Tokyo. "Our next observations with ALMA have already started. Higher resolution observations will allow us to see the distribution and motion of ionised oxygen in the galaxy and provide vital information to help us understand the properties of the galaxy."

Work is already underway for another observation using the ALMA telescope, and this time the team hopes to capture a higher resolution image that will reveal details of ionized oxygen gas distribution within the galaxy, and the high-speed motion of the gas.

Motoko Kakubayashi
Kavli Institute For The Physics And Mathematics Of The Universe
on June 17, 2016