Utilizing the Atacama Large Millimeter/submillimeter Array (ALMA), one of the most powerful telescopes in the world, U.S. Naval Research Laboratory (NRL) astrophysicist Dr. Tracy Clarke and an international team of researchers have peered into the feeding habits of a supermassive black hole and witnessed the first evidence of a new diet. The black hole, whose mass is nearly 300 million times that of our sun, is on the verge of gulping down massive clumps of cold gas which each contain as much material as a million suns.

Lurking in the heart of the galaxy cluster Abell 2597, located nearly one billion light years from Earth in the constellation Aquarius, astronomers track several massive gas clouds that are raining down on the central supermassive black hole. The complex cosmic weather, as illustrated in this artist's concept, includes condensed clouds of cold molecular gas in the galaxy core that cast shadows seen in the ALMA observations. These clouds condense out of the surrounding hot intracluster medium and fuel 'cold, chaotic' accretion (or feeding) of the central supermassive black hole. This fuel leads to massive outbursts that drive the powerful radio jets out into the surrounding medium. 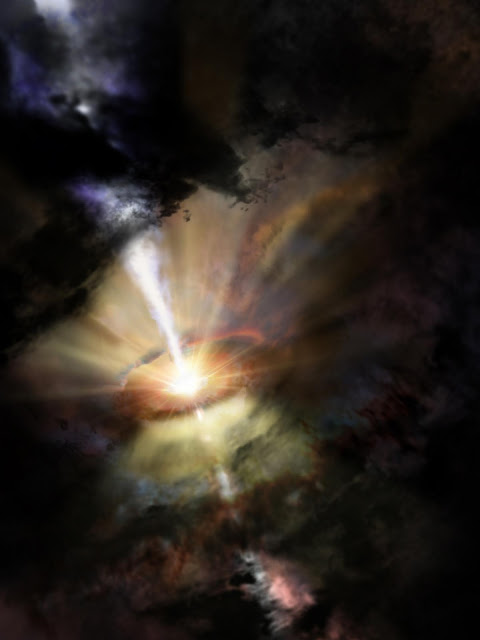 Previously, astronomers generally believed that supermassive black holes at the centers of galaxies slowly grazed on a steadfast diet of hot ionized gas from the galaxy's halo. The new ALMA observations show that under the right intergalactic conditions, the black hole can instead feed on a chaotic downpour of cold, clumpy clouds that have condensed out of the hot gas and plummeted into the heart of the galaxy where the supermassive black hole resides. These new observations -- recently published in a Natureletter led by Dr. Grant Tremblay, Yale Center for Astronomy and Astrophysics -- will help recast astronomers models of how supermassive black holes grow through a process known as accretion.

The team of astronomers used ALMA to study an unusually bright cluster of individual galaxies, collectively referred to as Abell 2597, in hopes of mapping the spatial structure and velocity of the cold gas in the system. Earlier work by Clarke revealed that the hot gas in the core of this cluster is riddled with X-ray cavities excavated by powerful radio jets driven by outbursts from the central supermassive black hole. The ALMA observations were aimed at searching for evidence that the powerful radio jets can also pull cold gas out of the cluster core to stop catastrophic runaway cooling.

"We've known for a long time that black holes at the heart of galaxies can launch powerful jets that travel far beyond the borders of their host galaxy but we really don't understand how this process happens," said Clarke. In recent years theoretical models have predicted that black holes may grow through so-called cold, chaotic accretion but unambiguous observational evidence of this form of accretion has been elusive, until now.

While studying the ALMA data on the central galaxy in Abell 2597 the team of astronomers discovered something unexpected, the distinct signature of three shadows cast by massive clouds of cold gas raining onto the central supermassive black hole. Clarke points out that these clouds fall into the core of this galaxy at close to 300 kilometers per second, adding, that "If you could travel at this speed, it would take you about two minutes to circumnavigate the Earth."

These shadows, known as absorption features, are formed when the in-falling clouds pass in front of the bright emission from very near the black hole and block, or absorb, some of that radiation. However, it is likely that there are many more clouds that went undetected by the ALMA observations since the astronomers are only able to probe a small sightline toward the cluster core.

To put these features in perspective, Clark says, "If I were a weather forecaster covering the center of Abell 2597, my weekend forecast for a million years from now would likely be 'cloudy with a chance of rain and explosive outbursts.'"

What Clarke is referring to, is the fact that the clouds are expected to eventually feed a massive outburst from the central supermassive black hole. The outburst will drive a new generation of radio jets into the cluster to evacuate cavities and heat the gas. Eventually this gas will cool into cold clumps and fall back into the central black hole. This 'feedback cycle' may be essential to maintaining a cosmic balance of heating and cooling in galaxy clusters, the most massive known objects in the Universe.

Astronomers, however, are unable to determine from a single system that these clouds will drive the next outburst and therefore plan next to use ALMA for a broader study of galaxies to determine if this black hole 'diet' is as widespread as theory suggests.