Researchers at the Texas Analog Center of Excellence (TxACE) at UT Dallas are working to develop an affordable electronic nose that can be used in breath analysis for a wide range of health diagnosis.

While devices that can conduct breath analysis using compound semiconductors exist, they are bulky and too costly for commercial use, said Dr. Kenneth O, one of the principal investigators of the effort and director of TxACE. The researchers determined that using CMOS integrated circuits technology will make the electronic nose more affordable.

Researchers determined that using integrated circuits, including one shown right of the US quarter and below the label 'CHIP1' in an electronic nose will make the device more affordable.

CMOS is the integrated circuits technology used to manufacture the bulk of electronics that have made smartphones, tablets and other devices possible.

The new research was presented Wednesday in a paper titled "200-280GHz CMOS Transmitter for Rotational Spectroscopy and Demonstration in Gas Spectroscopy and Breath Analysis" at the 2016 IEEE Symposia on VLSI Technology and Circuits in Honolulu, Hawaii.

"Smell is one of the senses of humans and animals, and there have been many efforts to build an electronic nose," said Dr. Navneet Sharma, the lead author of paper, who recently defended his doctoral thesis at UT Dallas. "We have demonstrated that you can build an affordable electronic nose that can sense many different kinds of smells. When you're smelling something, you are detecting chemical molecules in the air. Similarly, an electronic nose detects chemical compounds using rotational spectroscopy."

The rotational spectrometer generates and transmits electromagnetic waves over a wide range of frequencies, and analyzes how the waves are attenuated to determine what chemicals are present as well as their concentrations in a sample. The system can detect low levels of chemicals present in human breath.

Breaths contain gases from the stomach and that come out of blood when it comes into contact with air in the lungs. The breath test is a blood test without taking blood samples. Breath contains information about practically every part of a human body.

The electronic nose can detect gas molecules with more specificity and sensitivity than Breathalyzers, which can confuse acetone for ethanol in the breath. The distinction is important, for example, for patients with Type 1 diabetes who have high concentrations of acetone in their breath.

"If you think about the industry around sensors that emulate our senses, it's huge," said Dr. O, also a professor in the Erik Jonsson School of Engineering and Computer Science and holder of the Texas Instruments Distinguished University Chair. "Imaging applications, hearing devices, touch sensors -- what we are talking about here is developing a device that imitates another one of our sensing modalities and making it affordable and widely available. The possible use of the electronic nose is almost limitless. Think about how we use smell in our daily lives."

Dr. Navneet Sharma (left) and Qian Zhong of UT Dallas are part of a research team working to create an affordable electronic nose that can improve breath analysis. Sharma is the lead author of a new study that reveals the benefits of using CMOS integrated circuits technology in the device. 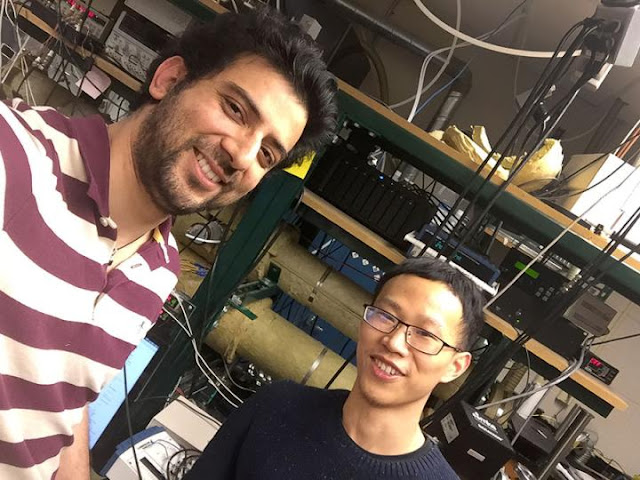 The researchers envision the CMOS-based device will first be used in industrial settings and then in doctors' offices and hospitals. As the technology matures, they could become household devices. Dr. O said the need for blood work and gastrointestinal tests could be reduced, and diseases could be detected earlier, lowering the costs of health care.

The researchers are working toward construction of a prototype programmable electronic nose that can be made available for beta testing sometime in early 2018.

TxACE and this work are supported in large part by the Semiconductor Research Corporation (SRC) and Texas Instruments Inc. Additional support was provided by Samsung Global Research Outreach.

"SRC and its members, including Texas Instruments, Intel, IBM, Freescale, Mentor Graphics, ARM and GlobalFoundries, have been following this work for several years. We are excited by the possibilities of the new technology and are working to rapidly explore its uses and applications," said Dr. David Yeh, SRC senior director. "It is a significant milestone, but there is still much more research needed for this to reach its potential."