An international team of scientists have found a potentially viable way to remove anthropogenic (caused or influenced by humans) carbon dioxide emissions from the atmosphere - turn it into rock.

The study, published today in Science, has shown for the first time that the greenhouse gas carbon dioxide (CO2) can be permanently and rapidly locked away from the atmosphere, by injecting it into volcanic bedrock. The CO2 reacts with the surrounding rock, forming environmentally benign minerals.

Section of rock core from the CO2 storage reservoir showing vesicular basalt with a well-defined fracture with calcium carbonate mineralization. 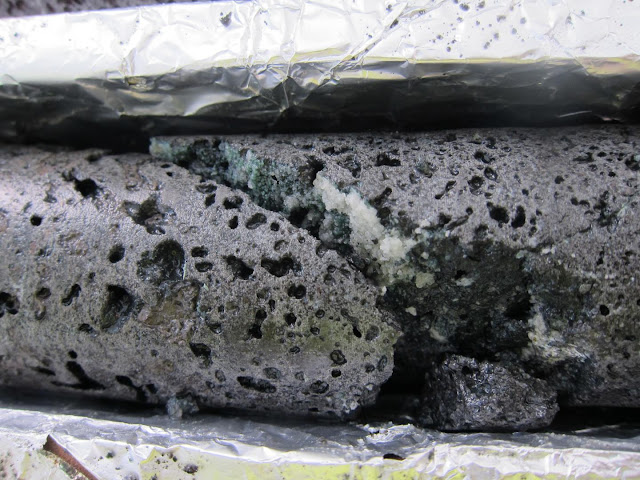 Measures to tackle the problem of increasing greenhouse gas emissions and resultant climate change are numerous. One approach is Carbon Capture and Storage (CCS), where CO2 is physically removed from the atmosphere and trapped underground. Geoengineers have long explored the possibility of sealing CO2 gas in voids underground, such as in abandoned oil and gas reservoirs, but these are susceptible to leakage. So attention has now turned to the mineralisation of carbon to permanently dispose of CO2.

Until now it was thought that this process would take several hundreds to thousands of years and is therefore not a practical option. But the current study - led by Columbia University, University of Iceland, University of Toulouse and Reykjavik Energy - has demonstrated that it can take as little as two years.

Lead author Dr Juerg Matter, Associate Professor in Geoengineering at the University of Southampton, says: "Our results show that between 95 and 98 per cent of the injected CO2 was mineralised over the period of less than two years, which is amazingly fast."

The gas was injected into a deep well at the study site in Iceland. As a volcanic island, Iceland is made up of 90 per cent basalt, a rock rich in elements such as calcium, magnesium and iron that are required for carbon mineralisation. The CO2 is dissolved in water and carried down the well. On contact with the target storage rocks, at 400-800 metres under the ground, the solution quickly reacts with the surrounding basaltic rock, forming carbonate minerals.

"Carbonate minerals do not leak out of the ground, thus our newly developed method results in permanent and environmentally friendly storage of CO2 emissions," says Dr Matter, who is also a member of the University's Southampton Marine and Maritime Institute and Adjunct Senior Scientist at Lamont-Doherty Earth Observatory Columbia University. "On the other hand, basalt is one of the most common rock type on Earth, potentially providing one of the largest CO2 storage capacity."

To monitor what was happening underground, the team also injected 'tracers', chemical compounds that literally trace the transport path and reactivity of the CO2. There were eight monitoring wells at the study site, where they could test how the chemical composition of the water had changed. The researchers discovered that by the time the groundwater had migrated to the monitoring wells, the concentration of the tracers - and therefore the CO2 - had diminished, indicating that mineralisation had occurred.

"The overall scale of our study was relatively small. So, the obvious next step for CarbFix is to upscale CO2 storage in basalt. This is currently happening at Reykjavik Energy's Hellisheidi geothermal power plant, where up to 5,000 tonnes of CO2 per year are captured and stored in a basaltic reservoir."

Air photograph of Reykjavik Energy's Hellisheidi geothermal power plant. The current emissions of the powerplant are: 40,000 tons CO2/year and 12,000 tons H2S/year. The CarbFix I pilot CO2 injection site is connected to the powerplant via a pipeline that delivered some of the CO2 and H2S gases that were injected into a basaltic storage reservoir at ~500 m depth below surface. 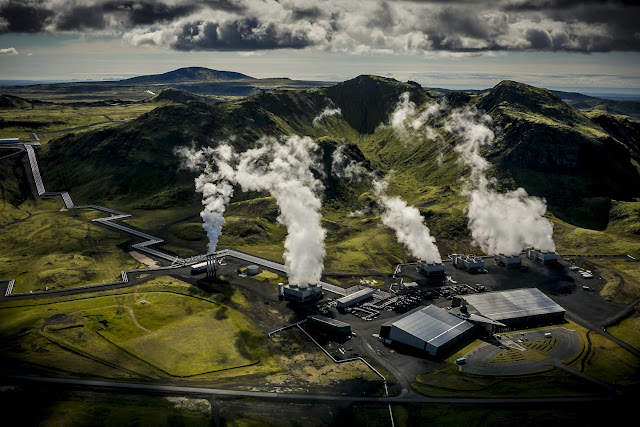 The investigation is part of the CarbFix project, a European Commission and U.S. Department of Energy funded programme to develop ways to store anthropogenic CO2 in basaltic rocks through field, laboratory and modelling studies (http://carbfix.com).