Jupiter Is Glowing in New Images

A team led by Leigh Fletcher of the University of Leicester in the United Kingdom are presenting new images of Jupiter at the UK's Royal Astronomical Society's National Astronomy Meeting in Nottingham.

This video was created from many short VISIR exposures at a wavelength of 5 micrometres. The telescope was moved slightly between exposures and the changing turbulence of the Earth’s atmosphere can be seen.

Obtained with the VISIR instrument on ESO'sVery Large Telescope , the new images are part of a focused effort to improve understanding of Jupiter's atmosphere prior to the arrival of NASA's Juno spacecraftJuno spacecraft in July this year.

The Juno spacecraft was named after the mythological wife of the god Jupiter. Just like his planetary counterpart, Jupiter veiled himself in clouds to hide his mischief, and only Juno was able to peer through them to see his true nature.

In preparation for the imminent arrival of NASA's Juno spacecraft in July 2016, astronomers used ESO's Very Large Telescope to obtain spectacular new infrared images of Jupiter using the VISIR instrument. They are part of a campaign to create high-resolution maps of the giant planet to inform the work to be undertaken by Juno over the following months, helping astronomers to better understand the gas giant. This false-color image was created by selecting and combining the best images obtained from many short VISIR exposures at a wavelength of 5 micrometers. 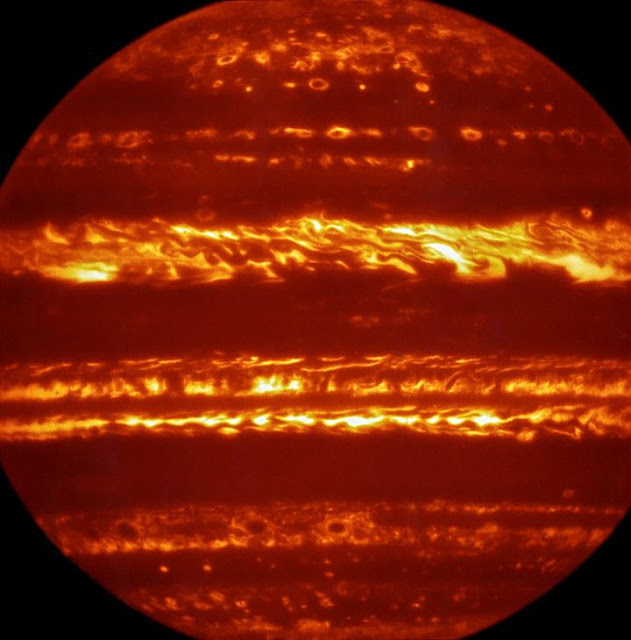 The campaign has involved the use of several telescopes based in Hawaii and Chile, as well as contributions from amateur astronomers around the world. The maps do not just give snapshots of the planet, they also reveal how Jupiter's atmosphere has been shifting and changing in the months prior to Juno's arrival.

The Juno spacecraft was launched in 2011, and has travelled nearly 3000 million kilometres to reach the Jovian system. Spacecraft can collect data free from the limitations affecting telescopes on Earth so with that in mind, it might seem surprising that this ground-based campaign was considered so important.

Leigh Fletcher describes the significance of this research in preparing for Juno's arrival: "These maps will help set the scene for what Juno will witness in the coming months. Observations at different wavelengths across the infrared spectrum allow us to piece together a three-dimensional picture of how energy and material are transported upwards through the atmosphere."

False colour images generated from VLT observations in February and March 2016, showing two different faces of Jupiter. The bluer areas are cold and cloud-free, the orangey areas are warm and cloudy, more colourless bright regions are warm and cloud-free, and dark regions are cold and cloudy (such as the Great Red Spot and the prominent ovals). The wave pattern over the North Equatorial Band shows up in orange.

This view was created from VLT/VISIR infrared images from February 2016 (left) and March 2016 (right). The orange images were obtained at 10.7 micrometres wavelength and highlight the different temperatures and presence of ammonia. The blue images at 8.6 micrometres highlight variations in cloud opacity. 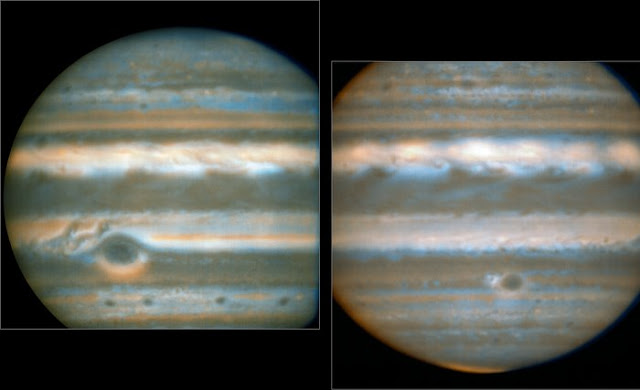 
Capturing sharp images through the Earth's constantly shifting atmosphere is one of the greatest challenges faced by ground-based telescopes. This glimpse of Jupiter's own turbulent atmosphere, rippling with cooler gas clouds, was possible thanks to a technique known as lucky imaging. Sequences of very short exposures were taken of Jupiter by VISIR, producing thousands of individual frames. The lucky frames, where the image is least affected by the atmosphere's turbulence, are selected and the rest discarded. Those selected frames are aligned and combined to produce remarkable final pictures like the ones shown here.

Glenn Orton, leader of the ground-based campaign in support of Juno's mission, elaborates on why the preparatory observations from Earth are so valuable: "The combined efforts of an international team of amateur and professional astronomers have provided us with an incredibly rich dataset over the past eight months. Together with the new results from Juno, the VISIR dataset in particular will allow researchers to characterise Jupiter's global thermal structure, cloud cover and distribution of gaseous species."

This view compares a lucky imaging view of Jupiter from VISIR (left) at infrared wavelengths with a very sharp amateur image in visible light from about the same time (right). 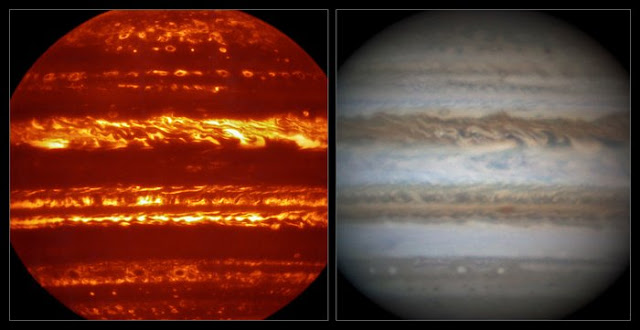 Whilst the modern Juno's mission to unveil the mighty Jupiter will bring new and highly anticipated results, its way has been paved by ground-based efforts here on Earth.