How Fat Becomes Lethal, Even Without Weight Gain

Sugar in the form of blood glucose provides essential energy for cells. When its usual dietary source -- carbohydrates -- is scarce, the liver can produce it with the aid of fat. But new research from Johns Hopkins now adds to evidence that other tissues can step in to make glucose when the liver's ability is impaired, and that the breakdown of fats in the liver is essential to protect it from a lethal onslaught of fat. The new research findings, from studies in mice, are likely to help researchers better understand a growing class of often-deadly metabolic diseases, which affect how the body processes nutrients, the investigators say.

A summary of the findings will appear online June 16 in the journal Cell Reports.

"We were surprised that other tissues, including the kidney and intestine, could compensate so well when the liver's ability to generate glucose is impaired," says Michael Wolfgang, Ph.D., "but, then again, it's not unusual in biology to have backup systems for something so crucial to survival as providing energy to cells."

The livers of a normal mouse (left) and a mouse whose liver cells lack Cpt2 (right) are shown after eating a high fat diet. 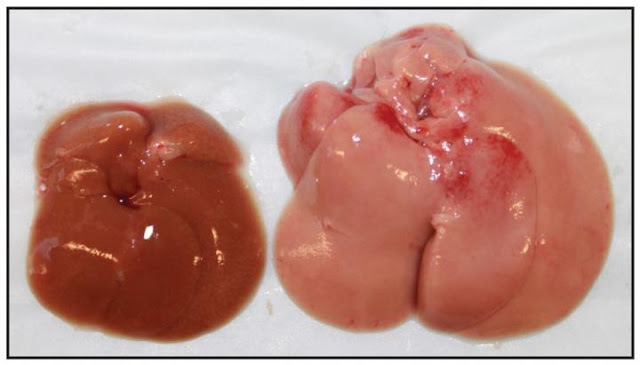 Wolfgang, an associate professor of biological chemistry at the Johns Hopkins University School of Medicine, says that according to textbooks, the ability to maintain blood glucose during starvation, known as gluconeogenesis, requires the breakdown and processing of fatty acids, known as fatty acid oxidation. Also, it is thought that about 90 percent of gluconeogenesis occurs in the liver, while the other 10 percent occurs in the kidneys and gut. So when he and his team deleted the gene Cpt2, which is necessary for fatty acid oxidation, from mouse liver cells, they didn't expect them to survive without a continual supply of carbohydrates.

"Mice live for the first two weeks on milk from their moms, which is high in fat and low in carbs," says Wolfgang, "so we were surprised that they did OK when their liver's ability to burn fat to make glucose and ketones was crippled."

Wolfgang explains that when enzymes break down high-energy compounds -- fatty acids -- they produce multiple molecules of acetyl CoA, which funnel into two different reactions. One generates energy-containing molecules of ATP, which can be used to make glucose to maintain blood glucose levels in animals that haven't eaten carbohydrates in a while. The other reaction makes molecules called ketones, which can be used by some tissues, like the brain, as an alternative energy source when glucose is scarce.

The researchers were also surprised that the mice lacking Cpt2 in the liver weighed the same as normal mice and used the same amount of energy. They even used comparable amounts of fat and sugar as fuel sources. The only apparent change was lower levels of circulating ketones, which was expected.

"I still find it hard to wrap my head around how these seriously compromised mice not only survived but were indistinguishable from normal mice in their energy use," says Wolfgang.

In further tests, when the researchers examined the mouse kidneys, they found an increased fat content and the genes responsible for fatty acid oxidation were more active, suggesting that the kidney had dialed up the process compared to normal mice.

Those results begged the question of just what distress signals the liver was sending to tell other tissues to help. Examining the activity of genes in the liver, the team found huge changes, including in some long-range signaling molecules. One, known as FGF21, caught their eye because it encourages cells to absorb carbohydrates and break down fats, and is being tested as a treatment for diabetes and obesity. Indeed, they found its levels greatly elevated in the blood of mice whose livers lacked the ability to burn fat.

To find out how fasting would affect fatty acid oxidation in the liver, the researchers withheld food from the genetically modified mice for 24 hours. But the mice were able to adjust to even this challenge. Their overall energy usage was normal, as were their blood glucose levels, though their livers were fatty and they had too many circulating fats and no circulating ketones. The researchers also saw changes in gene activity levels related to oxidation, both in the liver and the kidney.

To better understand the unique metabolism of the mice lacking Cpt2, the researchers next put them on a high-fat, "ketogenic diet," similar to the commercial Atkins diet that is very low in carbohydrates. Although, according to Wolfgang, they were consuming a lot of calories and essentially eating butter for every meal, their livers couldn't handle the fat, and the diet was eventually lethal to the mice. The mice had seemingly dissolved all fat tissue throughout their bodies, but their livers were engorged with fat molecules. Wolfgang explains that fat tissue throughout the body breaks down fats into fatty acids, which are then sent to the liver for processing.

Wolfgang says: "The liver knew it needed to burn fat to make glucose, so it kept asking fat tissue to send fatty acids. But it couldn't burn those fatty acids, so it just absorbed them and got too fat to function."

Wolfgang says the team's data suggest that almost all circulating ketones are produced by the liver through fatty acid oxidation. Ketones are known to slow the breakdown of fats in fat tissue, so their absence in the mice probably contributed to the continued onslaught of fats on the liver.

All of this, says Wolfgang, might help explain how and why metabolism goes haywire in people who are obese, diabetic or are born with genetic errors that affect fatty acid oxidation, including errors in Cpt2, which can be lethal.

Wolfgang also points out that what acutely threatens people with type 1 diabetes is a condition called ketoacidosis. Since these individuals lack insulin, which cells need to absorb carbohydrates, their cells end up relying too heavily on fatty acid oxidation in the liver, which generates ketones. Too many ketones in the blood make it acidic, which decreases its capacity to carry oxygen. Wolfgang hopes that further studies to understand how the body adjusts to a compromised liver will shed light on how to prevent ketoacidosis and better regulate or re-regulate faulty metabolism.