The prediction, published online June 22 in the journal Nature, is based on computer simulations of more than a billion evolving binary stars. The simulations are based on state-of-the-art modeling of the physics involved, informed by the most recent astronomical and astrophysical observations.

"The main thing we find is that what LIGO detected makes sense," said Daniel Holz, assistant professor in physics and astronomy at the University of Chicago and a co-author of the Nature paper. The simulations predict the formation of black-hole binary stars in a range of masses that includes the two already observed. As more LIGO data become available, Holz and his colleagues will be able to test their results more rigorously.

This artist's illustration depicts the merging black hole binary systems for GW150914 (left) and GW151226 (right). The black hole pairs are shown together in this illustration, but were actually detected at different times, and on different parts of the sky. The images have been scaled to show the difference in black hole masses. New research predicts that the Laser Interferometer Gravitational wave Observatory will detect gravitational waves generated by many more merging black holes in coming years. 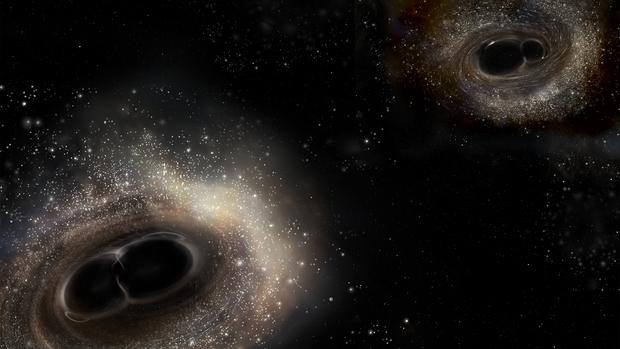 The paper's lead author, Krzysztof Belczynski of Warsaw University in Poland, said he hopes the results will surprise him, that they will expose flaws in the work. Their calculations show, for example, that once LIGO reaches full sensitivity, it will detect only one pair of colliding neutron stars for every 1,000 detections of the far more massive black-hole collisions.

"Actually, I would love to be proven wrong on this issue. Then we will learn a lot," Belczynski said.

The new Nature paper, which includes co-authors Tomasz Bulik of Warsaw University and Richard O'Shaughnessy of the Rochester Institute of Technology, describes the most likely black-hole formation scenario that generated the first LIGO gravitational-wave detection in September 2015. That detection confirmed a major prediction of Albert Einstein's 1915 general theory of relativity.

The paper is the most recent in a series of publications, topping a decade of analyses where Holz, Belczynski and their associates theorize that the universe has produced many black-hole binaries in the mass range that are close enough to Earth for LIGO to detect.

LIGO scientist David Reitze takes us on a 1.3 billion year journey that begins with the violent merger of two black holes in the distant universe. The event produced gravitational waves, tiny ripples in the fabric of space and time, which LIGO detected on September 14, 2015, as they passed Earth.

"Here we simulate binary stars, how they evolve, turn into black holes, and eventually get close enough to crash into each other and make gravitational waves that we would observe," Holz said.

The simulations show that the formation and evolution of a typical system of binary stars results in a merger of similar masses, and after similarly elapsed times, to the event that LIGO detected last September. These black hole mergers have masses ranging from 20 to 80 times more than the sun.

LIGO will begin recording more gravitational-wave-generating events as the system becomes more sensitive and operates for longer periods of time. LIGO will go through successive upgrades over the coming years, and is expected to reach its design sensitivity by 2020. By then, the Nature study predicts that LIGO might be detecting more than 100 black hole collisions annually.

LIGO has detected big black holes and big collisions, with a combined mass greater than 30 times that of the sun. These can only be formed out of big stars.

"To make those you need to have low metallicity stars, which just means that these stars have to be relatively pristine," Holz said. The Big Bang produced mainly hydrogen and helium, which eventually collapsed into stars.

As these stars burned they forged heavier elements, which astronomers call "metals." Those stars with fewer metals lose less mass as they burn, resulting in the formation of more massive black holes when they die. That most likely happened approximately two billion years after the Big Bang, before the young universe had time to form significant quantities of heavy metals. Most of those black holes would have merged relatively quickly after their formation.

LIGO would be unable to detect the ones that merged early and quickly. But if the binaries were formed in large enough numbers, a small fraction would survive for longer periods and would end up merging 11 billion years after the Big Bang (2.8 billion years ago), recently enough for LIGO to detect.

This artist's animation shows the merger of two black holes and the gravitational waves that ripple outward during the event. The black holes—which represent those detected by LIGO on Dec. 26, 2015—were 14 and 8 times the mass of the sun, until they merged, forming a single black hole 21 times the sun's mass. One solar mass was converted to gravitational waves. In reality, the area near the black holes would appear
Credit: LIGO Lab Caltech : MIT

"That's in fact what we think happened," Holz said. Statistically speaking, "it's the most likely scenario." He added, however, that the universe continues to produce binary stars in local, still pristine pockets of low metallicity that resemble conditions of the early universe.

"In those pockets you can make these big stars, make the binaries, and then they'll merge right away and we would detect those as well."

Belczynski, Holz, and collaborators have based their simulations on what they regard as the best models available. They assume "isolated formation," which involves two stars forming in a binary, evolving in tandem into black holes, and eventually merging with a burst of gravitational wave emission. A competing model is "dynamical formation," which focuses on regions of the galaxy that contain a high density of independently evolving stars. Eventually, many of them will find each other and form binaries.

"There are dynamical processes by which those black holes get closer and closer and eventually merge," Holz said. Identifying which black holes merged under which scenario is difficult. One potential method would entail examining the black holes' relative spins. Binary stars that evolved dynamically are expected to have randomly aligned spins; detecting a preference for aligned spins would be clear evidence in favor of the isolated evolutionary model.

LIGO is not yet able to precisely measure black hole spin alignment, "but we're starting to get there," Holz said. "This study represents the first steps in the birth of the entirely new field of gravitational wave astronomy. We have been waiting for a century, and the future has finally arrived."

Contacts and sources:
Steve Koppes
University of Chicago
on June 26, 2016