In 1936, the young star FU Orionis began gobbling material from its surrounding disk of gas and dust with a sudden voraciousness. During a three-month binge, as matter turned into energy, the star became 100 times brighter, heating the disk around it to temperatures of up to 12,000 degrees Fahrenheit (7,000 Kelvin). FU Orionis is still devouring gas to this day, although not as quickly.

This brightening is the most extreme event of its kind that has been confirmed around a star the size of the sun, and may have implications for how stars and planets form. The intense baking of the star's surrounding disk likely changed its chemistry, permanently altering material that could one day turn into planets.

The brightness of outbursting star FU Orionis has been slowly fading since its initial flare-up in 1936. Researchers found that it has dimmed by about 13 percent in short infrared wavelengths from 2004 (left) to 2016 (right). 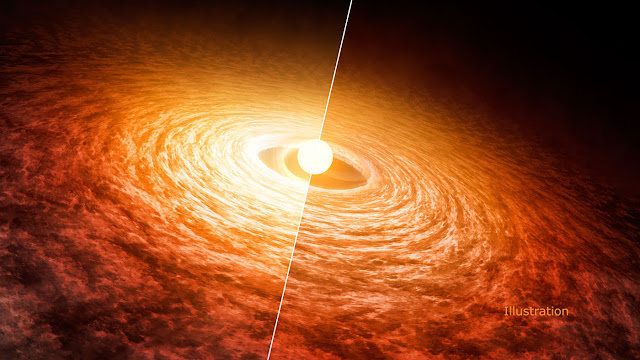 Credit: NASA/JPL-Caltech
"By studying FU Orionis, we're seeing the absolute baby years of a solar system," said Joel Green, a project scientist at the Space Telescope Science Institute, Baltimore, Maryland. "Our own sun may have gone through a similar brightening, which would have been a crucial step in the formation of Earth and other planets in our solar system."

Visible light observations of FU Orionis, which is about 1,500 light-years away from Earth in the constellation Orion, have shown astronomers that the star's extreme brightness began slowly fading after its initial 1936 burst. But Green and colleagues wanted to know more about the relationship between the star and surrounding disk. Is the star still gorging on it? Is its composition changing? When will the star's brightness return to pre-outburst levels?

To answer these questions, scientists needed to observe the star's brightness at infrared wavelengths, which are longer than the human eye can see and provide temperature measurements.

Green and his team compared infrared data obtained in 2016 using the Stratospheric Observatory for Infrared Astronomy, SOFIA, to observations made with NASA's Spitzer Space Telescope in 2004. SOFIA, the world's largest airborne observatory, is jointly operated by NASA and the German Aerospace Center and provides observations at wavelengths no longer attainable by Spitzer. The SOFIA data were taken using the FORCAST instrument (Faint Object infrared Camera for the SOFIA Telescope).

"By combining data from the two telescopes collected over a 12-year interval, we were able to gain a unique perspective on the star's behavior over time," Green said. He presented the results at the American Astronomical Society meeting in San Diego, this week.

Using these infrared observations and other historical data, researchers found that FU Orionis had continued its ravenous snacking after the initial brightening event: The star has eaten the equivalent of 18 Jupiters in the last 80 years.

The recent measurements provided by SOFIA inform researchers that the total amount of visible and infrared light energy coming out of the FU Orionis system decreased by about 13 percent over the 12 years since the Spitzer observations. Researchers determined that this decrease is caused by dimming of the star at short infrared wavelengths, but not at longer wavelengths. That means up to 13 percent of the hottest material of the disk has disappeared, while colder material has stayed intact.

"A decrease in the hottest gas means that the star is eating the innermost part of the disk, but the rest of the disk has essentially not changed in the last 12 years," Green said. "This result is consistent with computer models, but for the first time we are able to confirm the theory with observations."

Astronomers predict, partly based on the new results, that FU Orionis will run out of hot material to nosh on within the next few hundred years. At that point, the star will return to the state it was in before the dramatic 1936 brightening event. Scientists are unsure what the star was like before or what set off the feeding frenzy.

"The material falling into the star is like water from a hose that's slowly being pinched off," Green said. "Eventually the water will stop."

If our sun had a brightening event like FU Orionis did in 1936, this could explain why certain elements are more abundant on Mars than on Earth. A sudden 100-fold brightening would have altered the chemical composition of material close to the star, but not as much farther from it. Because Mars formed farther from the sun, its component material would not have been heated up as much as Earth's was.

At a few hundred thousand years old, FU Orionis is a toddler in the typical lifespan of a star. The 80 years of brightening and fading since 1936 represent only a tiny fraction of the star's life so far, but these changes happened to occur at a time when astronomers could observe.

"It's amazing that an entire protoplanetary disk can change on such a short timescale, within a human lifetime," said Luisa Rebull, study co-author and research scientist at the Infrared Processing and Analysis Center (IPAC), based at Caltech, Pasadena, California.

Green plans to gain more insight into the FU Orionis feeding phenomenon with NASA's James Webb Space Telescope, which will launch in 2018. SOFIA has mid-infrared high-resolution spectrometers and far-infrared science instrumentation that complement Webb's planned near- and mid-infrared capabilities. Spitzer is expected to continue exploring the universe in infrared light, and enabling groundbreaking scientific investigations, into early 2019.

SOFIA is a joint project of NASA and the German Aerospace Center (DLR). The aircraft is based at NASA Armstrong Flight Research Center's facility in Palmdale, California. NASA's Ames Research Center in Moffett Field, California, manages the SOFIA science and mission operations in cooperation with the Universities Space Research Association (USRA) headquartered in Columbia, Maryland, and the German SOFIA Institute (DSI) at the University of Stuttgart.

For more information about SOFIA, visit: http://www.nasa.gov/sofia
http://www.dlr.de/en/sofia
on June 15, 2016