Galactic Hearts May Be Smaller Than First Thought; Suggests Co-Evolution of Galaxies and Central Black Hole

The supermassive black holes found at the centre of every galaxy, including our own Milky Way, may, on average, be smaller than we thought, according to work led by University of Southampton astronomer Dr Francesco Shankar.

If he and his colleagues are right, then the gravitational waves produced when they merge will be harder to detect than previously assumed. The international team of scientists published their results in Monthly Notices of the Royal Astronomical Society

An artist's concept of a supermassive black hole at the center of a galaxy. 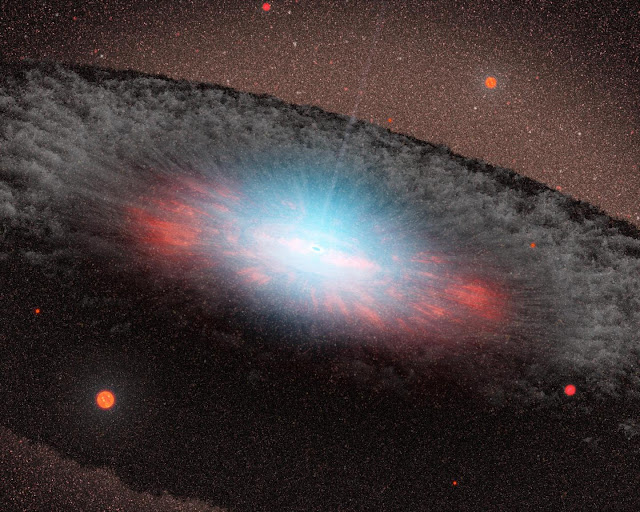 Supermassive black holes have been found lurking in the cores of all galaxies observed with high enough sensitivity. Despite this, little is known about how they formed. What is known is that the mass of a supermassive black hole at the centre of a galaxy is related to the total mass and the typical speeds (the "velocity dispersion") of the stars in its host.

The very existence of this relationship suggests a close co-evolution between black holes and their host galaxies, and understanding their origin is vital for a proper model of how galaxies and black holes form and evolve. This is because many galaxy evolution models invoke powerful winds and/or jets from the central supermassive black hole to control or even stop star formation in the host galaxy (so-called "quasar feedback"). Alternatively, multiple mergers of galaxies - and their central black holes - are also often suggested as the primary drivers behind the evolution of massive galaxies.

Despite major theoretical and observational efforts in the last decades, it remains unclear whether quasar feedback actually ever occurred in galaxies, and to what extent mergers have truly shaped galaxies and their black holes.

The new work shows that selection effects - where what is observed is not representative - have significantly biased the view of the local black hole population. This bias has led to significantly overestimated black hole masses. It suggests that modellers should look to velocity dispersion rather than stellar mass as the key to unlocking the decades-old puzzles of both quasar feedback and the history of galaxies.

With less mass than previously thought, supermassive black holes have on average weaker gravitational fields. Despite this, they were still able to power quasars, making them bright enough to be observed over distances of billions of light years.

Unfortunately, it also implies a substantial reduction in the expected gravitational wave signal detectable from pulsar timing array experiments. Ripples in spacetime that were first predicted by Albert Einstein in his general theory of relativity in 1915; gravitational waves were finally detected last year and announced by the LIGO team this February. The hope is that coming observatories can observe many more gravitational wave events, and that it will provide astronomers with a new technique for observing the universe.

Dr Shankar comments: "Gravitational wave astronomy is opening up an entirely new way of observing the universe. Our results though illustrate how challenging a complete census of the gravitational background could be, with the signals from the largest black holes being paradoxically among the most difficult to detect with present technology."

Researchers expect pairs of supermassive black holes, found in merging galaxies, to be the strongest sources of gravitational waves in the universe. However, the more massive the pairs, the lower the frequencies of the emitted waves, which become inaccessible to ground based interferometers like LIGO. Gravitational waves from supermassive black holes can however be detected from space via dedicated gravitational telescopes (such as the present and future ESA missions LISA pathfinder and eLISA), or by a different method using 'pulsar timing arrays'.

These devices monitor the collapsed, rapidly rotating remnants of massive stars, which have pulsating signals. Even this method though is still a few years from making a detection, according to a follow-up study by the same team expected to appear in another Monthly Notices paper later this year.

Citation: Selection bias in dynamically measured supermassive black hole samples: its consequences and the quest for the most fundamental relation http://dx.doi.org/10.1093/mnras/stw678