First Detection of Methyl Alcohol in a Planet-forming Disc

The protoplanetary disc around the young star TW Hydrae is the closest known example to Earth, at a distance of only about 170 light-years. As such it is an ideal target for astronomers to study discs. This system closely resembles what astronomers think the Solar System looked like during its formation more than four billion years ago.

The Atacama Large Millimeter/Submillimeter Array (ALMA) is the most powerful observatory in existence for mapping the chemical composition and the distribution of cold gas in nearby discs. These unique capabilities have now been exploited by a group of astronomers led by Catherine Walsh (Leiden Observatory, the Netherlands) to investigate the chemistry of the TW Hydrae protoplanetary disc.

This artist's impression shows the closest known protoplanetary disc, around the star TW Hydrae in the huge constellation of Hydra (The Female Watersnake). The organic molecule methyl alcohol (methanol) has been found by the Atacama Large Millimeter/Submillimeter Array (ALMA) in this disc. This is the first such detection of the compound in a young planet-forming disc. 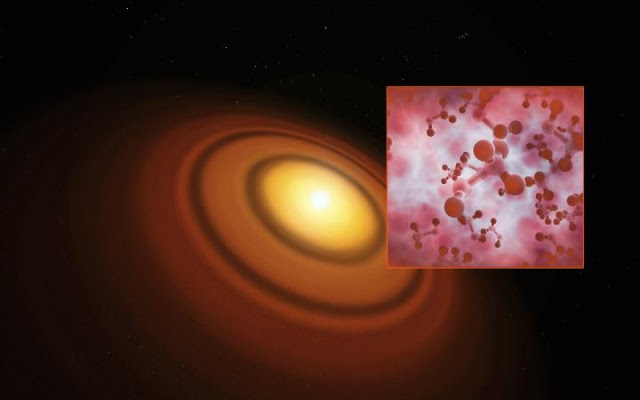 The ALMA observations have revealed the fingerprint of gaseous methyl alcohol, or methanol (CH3OH), in a protoplanetary disc for the first time. Methanol, a derivative of methane, is one of the largest complex organic molecules detected in discs to date. Identifying its presence in pre-planetary objects represents a milestone for understanding how organic molecules are incorporated into nascent planets.

Furthermore, methanol is itself a building block for more complex species of fundamental prebiotic importance, like amino acid compounds. As a result, methanol plays a vital role in the creation of the rich organic chemistry needed for life.

Catherine Walsh, lead author of the study, explains: "Finding methanol in a protoplanetary disc shows the unique capability of ALMA to probe the complex organic ice reservoir in discs and so, for the first time, allows us to look back in time to the origin of chemical complexity in a planet nursery around a young Sun-like star."

This artist’s impression video shows the closest known protoplanetary disc, around the star TW Hydrae in the huge constellation of Hydra (The Female Watersnake). The organic molecule methyl alcohol (methanol) has been found by the Atacama Large Millimeter/Submillimeter Array (ALMA) in this disc. This is the first such detection of the compound in a young planet-forming disc.

Gaseous methanol in a protoplanetary disc has a unique importance in astrochemistry. While other species detected in space are formed by gas-phase chemistry alone, or by a combination of both gas and solid-phase generation, methanol is a complex organic compound which is formed solely in the ice phase via surface reactions on dust grains.

This artist’s impression video shows the molecule methanol, or methyl alcohol (CH3OH). This organic compound has been found by the Atacama Large Millimeter/Submillimeter Array (ALMA) in the closest known protoplanetary disc, around the star TW Hydrae in the huge constellation of Hydra (The Female Watersnake). This is the first such detection of the compound in a young planet-forming disc. Its detection helps astronomers understand the chemical processes that occur during the formation of planetary systems and that ultimately lead to the creation of the ingredients for life.

The sharp vision of ALMA has also allowed astronomers to map the gaseous methanol across the TW Hydrae disc. They discovered a ring-like pattern in addition to significant emission from close to the central star.

A ring of methanol between 30 and 100 astronomical units(au) reproduces the pattern of the observed methanol data from ALMA. The identified structure supports the hypothesis that the bulk of the disc ice reservoir is hosted primarily on the larger (up to millimetre-sized) dust grains, residing in the inner 50 au, which have become decoupled from the gas, and drifted radially inwards towards the star.

The observation of methanol in the gas phase, combined with information about its distribution, implies that methanol formed on the disc's icy grains, and was subsequently released in gaseous form. This first observation helps to clarify the puzzle of the methanol ice-gas transition [2], and more generally the chemical processes in astrophysical environments [3].

In this study, rather than thermal desorption (with methanol released at temperatures higher than its sublimation temperature), other mechanisms are supported and discussed by the team, including photodesorption by ultraviolet photons and reactive desorption. More detailed ALMA observations would help to definitely favour one scenario among the others.

Radial variation of chemical species in the disc midplane composition, and specifically the locations of snowlines (http://www.eso.org/public/news/eso1333/) , are crucial for understanding the chemistry of nascent planets.The snowlines mark the boundary beyond which a particular volatile chemical species is frozen out onto dust grains. The detection of methanol also in the colder outer regions of the disc shows that it is able to escape off the grains at temperatures much lower than its sublimation temperature, necessary to trigger thermal desorption.

Ryan A. Loomis, a co-author of the study, adds: "Methanol in gaseous form in the disc is an unambiguous indicator of rich organic chemical processes at an early stage of star and planet formation. This result has an impact on our understanding of how organic matter accumulates in very young planetary systems."

This successful first detection of cold gas-phase methanol in a protoplanetary disc means that the production of ice chemistry can now be explored in discs, paving the way to future studies of complex organic chemistry in planetary birthplaces. In the hunt for life-sustaining exoplanets, astronomers now have access to a powerful new tool.

This research was presented in a paper entitled "First detection of gas-phase methanol in a protoplanetary disk", by Catherine Walsh et al., published in Astrophysical Journal, Volume 823, Number 1.
on June 15, 2016