Black hole mosh pit. In this simulation, 60 black holes and 500 stars interact with each other at the chaotic core of a globular cluster until two black holes combine to form a black hole binary.

These binary black holes are born in the chaotic “mosh pit” of a globular cluster, kicked out of the cluster and then eventually merge into one black hole. This theory, known as dynamical formation, is one of two recognized main channels for forming the binary black holes detected by the Advanced LIGO (Laser Interferometer Gravitational-Wave Observatory).

LIGO’s first detection of merging black holes is perfectly consistent with the dynamical formation model from the Northwestern research team and is what you would expect from a globular cluster, the researchers say. 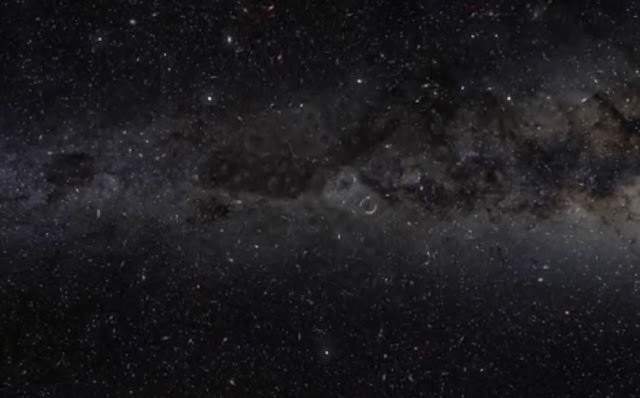 Colliding black holes do not emit light; however, they do release a phenomenal amount of energy as gravitational waves. The first detection of these waves occurred Sept. 14, and the second -- announced to the world this morning -- occurred three months later. These events have launched a new era in astronomy: using gravitational waves to learn about the universe.

“Thanks to LIGO, we’re not just theorists speculating anymore -- now we have data,” said Frederic A. Rasio, a theoretical astrophysicist at Northwestern and senior author of the study. “A relatively simple and well understood process seems to work. Simple freshman physics -- Newton’s first law of motion -- explains the gravitational dynamics of the first black holes detected by LIGO.”

Rasio will detail how the first LIGO detection fits into his team’s theory at a media briefing at 2:15 p.m. Pacific Daylight Time today (June 15) at the summer meeting of the American Astronomical Society (AAS) in San Diego. He also will be available to discuss the research at a related poster session later in the day, from 5:30 to 6:30 p.m. PDT at the AAS meeting.

At a separate media briefing the LIGO Scientific Collaboration announced its second detection -- on Boxing Day in the U.K. and Christmas Day 2015 in the U.S. -- of gravitational waves and merging black holes. This growing population of black holes will help astrophysicists learn more about the universe.

“We were ecstatic by the news announced earlier this year by LIGO about its first detection of colliding black holes,” said Carl L. Rodriguez, lead author of the study and a Ph.D. student in Rasio’s research group. “The findings are pretty much where we thought they would be. We look forward to working with the data from new detections.”

The coalescence of two black holes is a very violent and exotic event. Rasio and his team used models of globular clusters -- spherical collections of up to a million densely packed stars, common in the universe -- to demonstrate that a typical cluster can very naturally create a binary black hole that will merge and form one larger black hole.

Their powerful computer model can predict how many merging binary black holes LIGO might detect: potentially 100 forged in the cores of these dense star clusters per year. The model also shows where in the universe the binary black holes are, how long ago they merged and the masses of each black hole.

“Simple physical processes make the heavy black holes go to the center of the cluster,” Rasio said. “These pairs eventually merge and are detected by LIGO.” He is the Joseph Cummings Professor in the department of physics and astronomy in Northwestern’s Weinberg College of Arts and Sciences.

“By the end of the decade, we expect LIGO to detect hundreds to thousands of binary black holes,” Rodriguez said.

Rasio and Rodriguez are members of Northwestern’s Center for Interdisciplinary Exploration and Research in Astrophysics (CIERA).

In their study, Rasio, Rodriguez and colleagues describe in detail the dynamical interaction processes that could form a merging binary black hole system. They also show that theoretical predictions for this dynamical formation channel are, in general, far more robust than models for the other main channel for forming binary black holes, based on the evolution of massive stars in isolated binaries (not in star clusters).”

Rodriguez and colleagues used 52 detailed computer models to demonstrate how a globular cluster acts as a dominant source of binary black holes, producing hundreds of black hole mergers over a cluster’s 12-billion-year lifetime.

By comparing the models to recent observations of clusters in the Milky Way galaxy and beyond, the results show that Advanced LIGO (Laser Interferometer Gravitational-Wave Observatory) could eventually see more than 100 binary black hole mergers per year.

For the study, the research team used a parallel computing code for modeling star clusters developed through a CIERA-supported interdisciplinary collaboration between Northwestern’s physics and astronomy department and electrical engineering and computer science department. The paper includes 52 computer models, and their most massive model required 30,000 hours of computing power.

The paper, titled “Dynamical Formation of the GW150914 Binary Black Hole,” was published June 10 by The Astrophysical Journal Letters. In addition to Rasio and Rodriguez, other authors are Sourav Chatterjee and Vicky Kalogera of Northwestern and Carl-Johan Haster of the University of Birmingham.
on June 17, 2016