All life on the planet relies, in one way or another, on a process called carbon fixation: the ability of plants, algae and certain bacteria to "pump" carbon dioxide (CO2) from the environment, add solar or other energy and turn it into the sugars that are the required starting point needed for life processes.

At the top of the food chain are different organisms (some of which think, mistakenly, that they are "more advanced") that use the opposite means of survival: they eat sugars (made by photosynthetic plants and microorganisms) and then release carbon dioxide into the atmosphere. This means of growth is called "heterotrophism." Humans are, of course, heterotrophs in the biological sense because the food they consume originates from the carbon fixation processes of nonhuman producers.

Is it possible to "reprogram" an organism that is found higher in the food chain, which consumes sugar and releases carbon dioxide, so that it will consume carbon dioxide from the environment and produce the sugars it needs to build its body mass? That is just what a group of Weizmann Institute of Science researchers recently did. Dr. Niv Antonovsky, who led this research in Prof. Ron Milo's lab at the Institute's Plant and Environmental Sciences Department, says that the ability to improve carbon fixation is crucial for our ability to cope with future challenges, such as the need to supply food to a growing population on shrinking land resources while using less fossil fuel. 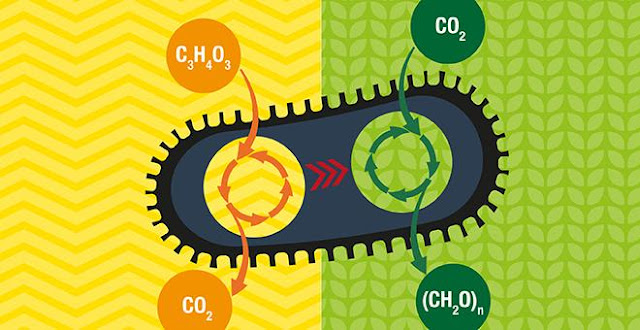 The Institute scientists rose to this challenge by inserting the metabolic pathway for carbon fixation and sugar production (the so called Calvin cycle) into the bacterium E. coli, a known "consumer" organism that eats sugar and releases carbon dioxide.

The metabolic pathway for carbon fixation is well known, and Milo and his group reckoned that, with proper planning, they would be able to attach the genes containing the information for building it into the bacterium's genome. Yet the main enzyme used in plants to fix carbon, RuBisCO, utilizes as a substrate for the CO2 fixation reaction a metabolite which is toxic for the bacterial cells. Thus the design had to include precisely regulating the expression levels of the various genes across this multistep pathway.

In one way the team's well-thought-out plan was a resounding success: The bacteria did indeed produce the carbon fixation enzymes, and these were functional. But the machinery, as a whole, did not "deliver the goods." Even though the carbon fixation machinery was expressed, the bacteria failed to use CO2 for sugar synthesis, relying instead on an external supply of sugar. "Of course, we were dealing with an organism that has evolved over millions of years to eat sugar, not CO2," says Antonovsky. "So we turned to evolution to help us create the system we intended."

Antonovsky, Milo and the team, including Shmuel Gleizer, Arren Bar-Even, Yehudit Zohar, Elad Herz and others, next designed tanks called "chemostats," in which they grew the bacteria, gradually nudging them into developing an appetite for CO2. Initially, along with ample bubbles of CO2, the bacteria in the tanks were offered a large amount of pyruvate, which is an energy source, as well as barely enough sugar to survive. Thus, by changing the conditions of their environment and stressing them, the scientists forced the bacteria to learn, by adaptation and development, to use the more abundant material in their environment. A month went by, and things remained fairly static. The bacteria seemed to not "get the hint." But at around a month and a half, some bacteria showed signs of doing more than "just surviving." By the third month the scientists were able to wean the evolved bacteria from the sugar and raise them on CO2 and pyruvate alone. Isotope labeling of the carbon dioxide molecules revealed that the bacteria were indeed using CO2 to create a significant portion of their body mass, including all the sugars needed to make the cell.

When the scientists sequenced the genomes of the evolved bacteria, they found many changes scattered throughout the bacterial chromosomes. "They were completely different from what we had predicted," says Milo. "It took us two years of hard work to understand which of these are essential and to unravel the 'logic' involved in their evolution." Repeating the experiment (and again waiting months) gave the scientists essential clues for identifying the mutations necessary for changing the E. coli diet from one based on sugar to one using carbon dioxide.

Milo: "The ability to program or reengineer E. coli to fix carbon could give researchers a new toolbox for studying and improving this basic process." Although currently the bacteria release CO2 back into the atmosphere, the team envisions that in the future their insights might be applied to creating microorganisms that soak up atmospheric CO2 and convert it into stored energy or to achieving crops with carbon fixing pathways, resulting in higher yields and better adaption to feeding humanity.

Contacts and sources:
Yael Edelman
The Weizmann Institute of Science
on June 23, 2016