Astronomers have identified a family of incredible galaxies that could shed further light on the transformation of the early Universe known as the ‘epoch of reionisation’. Dr David Sobral of Lancaster University will present their results on Monday 27 June at the National Astronomy Meeting in Nottingham.

About 150 million years after the Big Bang, some 13 billion years ago, the Universe was completely opaque to high energy ultraviolet light, with neutral hydrogen gas blocking its passage. Astronomers have long realised that this situation ended in the so-called ‘epoch of reionisation’, where ultraviolet light from the earliest stars broke open neutral hydrogen atoms, and could start to travel freely through the cosmos. This reionisation period marks a key transition between the relatively simple early cosmos, with normal matter made up of hydrogen and helium, and the universe as we see it today: transparent on large scales and filled with heavier elements.

This illustration of reionisation shows a timeline summarizing the evolution of the Universe running from left to right, where the Big Bang is on the left and the age of the Universe is about two billion years on the right. It shows how the cosmic “fog" of neutral (uncharged) hydrogen pervading the early Universe is cleared by the first objects to emit radiation.

In 2015 Sobral led a team that found the first example of a spectacularly bright galaxy within the epoch of reionisation, named Cosmos Redshift 7 or CR7, which may harbour first generation stars. The team also discovered a similar galaxy, MASOSA, which, together with Himiko, discovered by a Japanese team, hinted at a larger population of similar objects, perhaps made up of the earliest stars and/or black holes.

Using the Subaru and Keck telescopes on Hawaii, and the Very Large Telescope in Chile, Sobral and his team, along with a group in the US, have now found more examples of this population. All of the newly found galaxies seem to have a large bubble of ionised gas around them.

Sobral comments: “Stars and black holes in the earliest, brightest galaxies must have pumped out so much ultraviolet light that they quickly broke up hydrogen atoms in the surrounding universe. The fainter galaxies seem to have stayed shrouded from view for a lot longer. Even when they eventually become visible, they show evidence of plenty of opaque material still in place around them.”

“This makes the bright galaxies visible much earlier on in the history of the Universe, allowing us to not only use them to study reionisation itself, but also to study the properties of the very first galaxies and the black holes they may contain”, adds team member Jorryt Matthee, a PhD student at Leiden Observatory.

This artist’s impression shows CR7, a very distant galaxy discovered using ESO’s Very Large Telescope. It is by far the brightest galaxy yet found in the early Universe and there is strong evidence that examples of the first generation of stars lurk within it. 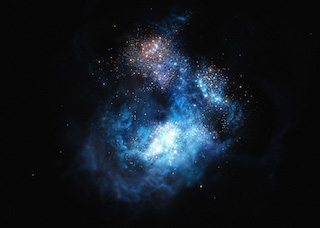 These massive, brilliant, and previously purely theoretical objects were the creators of the first heavy elements in history — the elements necessary to forge the stars around us today, the planets that orbit them, and life as we know it. This newly found galaxy is three times brighter than the brightest distant galaxy known up to now.

Sergio Santos is another co-author of the study and will soon be a PhD student at Lancaster University. He adds: “Our results highlight how hard it is to study the small faint sources in the early Universe. The neutral hydrogen gas blocks out some of their light, and because they are not capable of building their own local bubbles as quickly as the bright galaxies, they are much harder to detect.”

With five bright sources now confirmed, and many more expected to follow, CR7 may be part of a ‘team’ of tens to hundreds of thousands of bright galaxies. The fifth (V) galaxy, also discovered by Sobral and his team, takes the name VR7, this time in tribute to the astrophysicist Vera Rubin, who in 1996 became the first woman in over 150 years to win the Gold Medal of the Royal Astronomical Society.

Sobral is now looking forward to continuing his work with the new telescopes that will become available in the next few years. He comments: “What is really surprising is that the galaxies we find are much more numerous than people assumed, and they have a puzzling diversity. When telescopes like the James Webb Space Telescope are up and running, we will be able to take a closer look at these intriguing objects. We have only scratched the surface, and so the next few years will certainly bring fantastic new discoveries.”

For now, astronomers are using the largest existing telescopes on the ground and in space to better assess the composition, size and shape of the new galaxies. Results from this work have and will appear in papers in the journal Monthly Notices of the Royal Astronomical Society.