Astronomers have combined data from NASA’s Chandra X-ray Observatory, the Hubble Space Telescope and the National Science Foundation's Karl G. Jansky Very Large Array (VLA) to conclude that a peculiar source of radio waves thought to be a distant galaxy is actually a nearby binary star system containing a low-mass star and a black hole. This identification suggests there may be a vast number of black holes in our Galaxy that have gone unnoticed until now.

By combining data from Chandra and several other telescopes, astronomers have identified the true nature of an unusual source in the Milky Way galaxy. This discovery implies that there could be a much larger number of black holes in the Galaxy that have previously been unaccounted for. The images on the left show X-rays from Chandra and an optical image from Hubble of a large area around the source VLA J2130+12, including M15. The images on the right show the source VLA J2130+12 that is bright in radio waves, but can only be giving off a very small amount of X-rays. These pieces of information indicate the source contains a black hole with a few times the mass of the Sun. 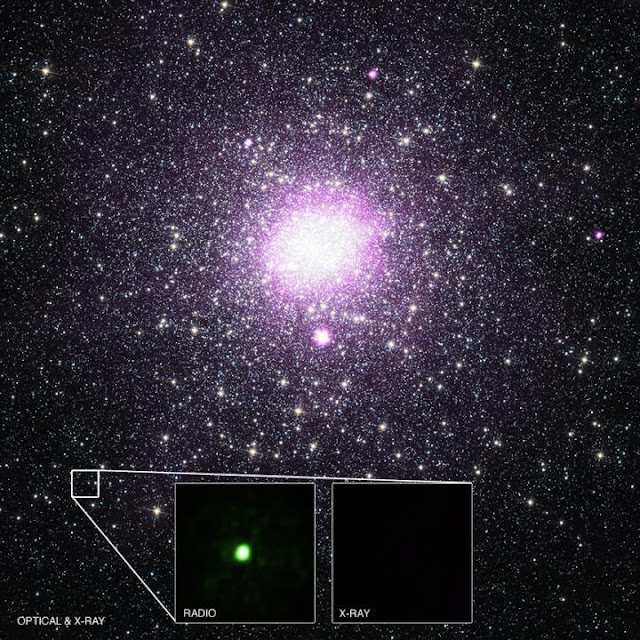 
For about two decades, astronomers have known about an object called VLA J213002.08+120904 (VLA J2130+12 for short). Although it is close to the line of sight to the globular cluster M15, most astronomers had thought that this source of bright radio waves was probably a distant galaxy.

Thanks to recent distance measurements with an international network of radio telescopes, including the EVN (European Very Long Baseline Interferometry Network) telescopes, the NSF's Green Bank Telescope and Arecibo Observatory, astronomers realized that VLA J2130+12 is at a distance of 7,200 light years, showing that it is well within our own Milky Way galaxy and about five times closer than M15. A deep image from Chandra reveals it can only be giving off a very small amount of X-rays, while recent VLA data indicates the source remains bright in radio waves.

This new study indicates that VLA J2130+12 is a black hole a few times the mass of our Sun that is very slowly pulling in material from a companion star. At this paltry feeding rate, VLA J2130+12 was not previously flagged as a black hole since it lacks some of the telltale signs that black holes in binaries typically display.

"Usually, we find black holes when they are pulling in lots of material. Before falling into the black hole this material gets very hot and emits brightly in X-rays," said Bailey Tetarenko of the University of Alberta, Canada, who led the study. "This one is so quiet that it's practically a stealth black hole."

This is the first time a black hole binary system outside of a globular cluster has been initially discovered while it is in such a quiet state.

Hubble observations identified VLA J2130+12 with a star having only about one-tenth to one-fifth the mass of the Sun. The observed radio brightness and the limit on the X-ray brightness from Chandra allowed the researchers to rule out other possible interpretations, such as an ultra-cool dwarf star, a neutron star, or a white dwarf pulling material away from a companion star.

Because this study only covered a very small patch of sky, the implication is that there should be many of these quiet black holes around the Milky Way. The estimates are that tens of thousands to millions of these black holes could exist within our Galaxy, about three to thousands of times as many as previous studies have suggested.

"Unless we were incredibly lucky to find one source like this in a small patch of the sky, there must be many more of these black hole binaries in our Galaxy than we used to think," said co-author Arash Bahramian, also of the University of Alberta.

There are other implications of finding that VLA J2130+12 is relatively near to us.

"Some of these undiscovered black holes could be closer to the Earth than we previously thought," said Robin Arnason, a co-author from Western University, Canada "However there's no need to worry as even these black holes would still be many light years away from Earth."

Sensitive radio and X-ray surveys covering large regions of the sky will need to be performed to uncover more of this missing population.

If, like many others, this black hole was formed in the plane of the Milky Way's disk, it would have needed a large kick at birth to launch it to its current position about 3,000 light years above the plane of the Galaxy.