Two volunteer participants in an international citizen science project have had a rare galaxy cluster that they found named after them.

The pair pieced together the huge C-shaped structure from much smaller images of cosmic radio waves shown to them as part of the web-based program Radio Galaxy Zoo.

The discovery surprised the astronomers running the program, said the lead author of the study Dr Julie Banfield of the ARC Centre of Excellence for All-sky Astrophysics (CAASTRO) at The Australian National University (ANU).

“They found something that none of us had even thought would be possible,” said Dr Banfield.More than 10,000 volunteers have joined in with Radio Galaxy Zoo, classifying over 1.6 million images from NASA’s Wide-Field Infrared Survey Explorer telescope and the NRAO Very Large Array in New Mexico, USA. 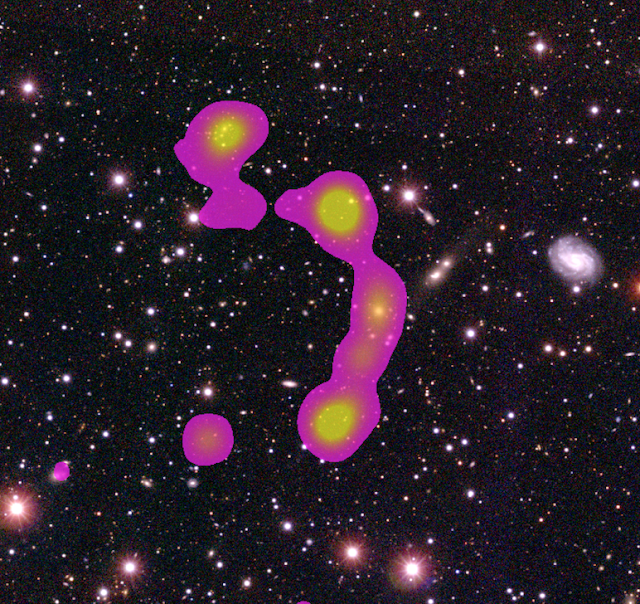 “The dataset is just too big for any individual or small team to plough through – but we have already reached almost 60% completeness” said Dr Banfield.

The project is led by Dr Banfield and Dr Ivy Wong who is based at the International Centre for Radio Astronomy Research (ICRAR) at The University of Western Australia.

“Although radio astronomy is not as pretty as optical images from the Hubble space telescope, people can find cool things, like black holes, quasars, spiral galaxies or clusters of galaxies.”

The astronomers classified the newly-discovered feature as a wide angle tail (WAT) radio galaxy, named for the C-shaped tail shape of highly energetic jets of plasma which are being ejected from it.

It is part of a previously unreported sparsely-populated galaxy cluster and one of the biggest ever found.

Their discovery has now been published in the Monthly Notices of the Royal Astronomical Society with the two volunteers included as co-authors.

“This radio galaxy might have had two distinct episodes of activity during its lifetime, with quiet times of approximately 1 million years in between.” said Radio Galaxy Zoo science team member and co-author Dr Anna Kapinska, also of CAASTRO / ICRAR at the University of Western Australia.

But the discovery of the Matorny-Terentev Cluster RGZ-CL J0823.2+0333, now bearing the names of the two citizen scientists, means even more than having added another piece to our cosmic puzzle.

While the unusual, bent shape of WATs has proven an excellent beacon for the detection of galaxy clusters, it will always be difficult to be detected by algorithms – which is where citizen science can play a huge part.

Through big projects such as Radio Galaxy Zoo, citizen science has established itself as a powerful research tool for astronomy, especially looking at the future challenges such as the EMU survey in Australia – the “Evolutionary Map of the Universe” with the Australian Square Kilometre Array Pathfinder (ASKAP) – and MeerKAT MIGHTEE in South Africa.

“Expanding on projects such as Radio Galaxy Zoo or on machine-learning techniques will be key to finding these unusual structures and to studying galaxy clusters.” said Dr Banfield.

The team of Radio Galaxy Zoo has entered their project in this year’s Australian Museum Eureka Prizes whose winners are expected to be announced during National Science Week.