Antarctic Lakes Are a Repository for Ancient Soot Say Researchers

Remote lakes in a perpetually ice-free area of Antarctica show not only the chemical signature of ancient wildfires, but also some much more recent evidence of fossil-fuel combustion, according to National Science Foundation (NSF)-funded research published this week in the journal Geophysical Research Letters.

The research is based on examination of the levels of dissolved black carbon (DBC) that persist in freshwater and saline lakes in the McMurdo Dry Valleys, a mountainous polar desert across McMurdo Sound from the NSF's logistics hub in Antarctica, McMurdo Station. NSF manages the US. Antarctic Program.

In this 2012 photo, a U.S. Antarctic Program helicopter flies through the McMurdo Dry Valleys. 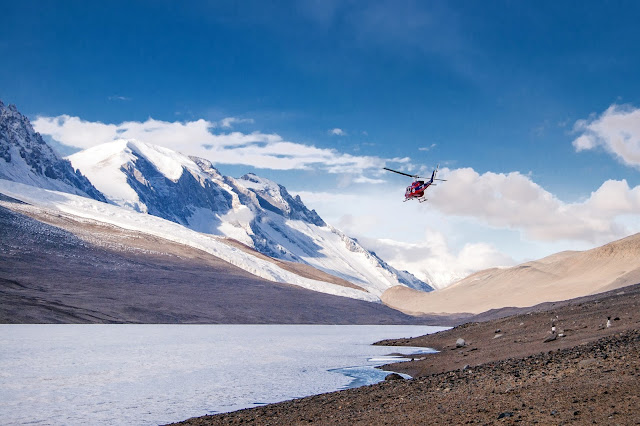 In addition to being almost completely scoured of ice and snow by high winds, the Dry Valleys are the site of ice-covered lakes, which experience seasonal, temperature-related advances and retreats in their amount of ice cover during the Southern Hemisphere's summer months, sometimes resulting in a temporary "moat" around the icy surface of the lakes.

They also have some unusual characteristics that make them scientifically interesting repositories for materials like DBC, which are carried into the lakes by local streams or through atmospheric circulation.

Michael Gooseff, the lead principal investigator for the McMurdo Dry Valleys Long-Term Ecological Research (LTER) Project, noted, for example, that in the very recent geological past -- several thousand years ago -- the lakes were at much higher levels and filled the Valleys. The lakes that remain are thought to be remnants of those larger bodies of water and to have collected materials like DBC over a very long time.

He added that the lakes in the Dry Valleys are, like most other lakes, storehouses of materials that find their way into them. But they also have an unusual characteristic important to DBC research; they are closed basins with no outlets.

In short, Gooseff said, "What goes into the lake, stays."

Alia L. Khan, with the Department of Civil and Environmental Engineering at Institute of Arctic and Alpine Studies at the University of Colorado Boulder is lead author on the paper. She is the recipient of an NSF Graduate Research Fellowship

She and other researchers with the Dry Valleys LTER, argue in the paper that brines in the lake bottoms retain DBC whose "woody signature" indicates the source is likely to have been burning -- such as wildfires and other natural events -- at lower latitudes as many as 2,500 years ago or more.

Black carbon from those fires -- more commonly known as soot -- would have been transported by atmospheric winds and deposited in Antarctic glaciers and later entered in lakes through freshwater run-off from nearby glaciers.

The research also indicates DBC levels from fossil fuel traces have increased in the past 25 years, but these concentrations are small in comparison to those associated with wildfires from more than 1,000 years ago. The researchers argue that these more modern traces could have two possible sources.

The first is that helicopters frequently fly in and out of the Dry Valleys to transport researchers and scientific cargo into the field. Most of this flying occurs at the peak of the Antarctic summer when the lake surfaces in the valleys experience a seasonal melt.

The researchers hypothesize, therefore, that emissions from the flights could settle into the moats and become DBC.

They also add that some of the carbon could come from long-range transport of carbon produced by burning of fossil fuels in other areas of the globe.

In either event, they note, their measurements may serve as baselines for tracking environmental quality in the Dry Valleys. "This fossil fuel signature could serve as an indicator of anthropogenic influences in Antarctic environments, which may continue to expand in the future."