“We want to find out to what extent domestic cats are influenced by the language and dialect that humans use to speak to them, because it seems that cats use slightly different dialects in the sounds they produce”, says reader in phonetics Susanne Schötz.

“In this project we will use phonetic analysis to compare cat sounds from two dialect areas in Sweden: Stockholm in the central part of Sweden, and Lund in the very south of Sweden.”

The project will be carried out over five years, until 2021, by three researchers from Lund and Linköping universities who will study intonation, voice and speaking style in human speech addressed to cats, as well as in cat speech vocalisations addressed to humans.

Researcher Susanne Schötz with her cat. 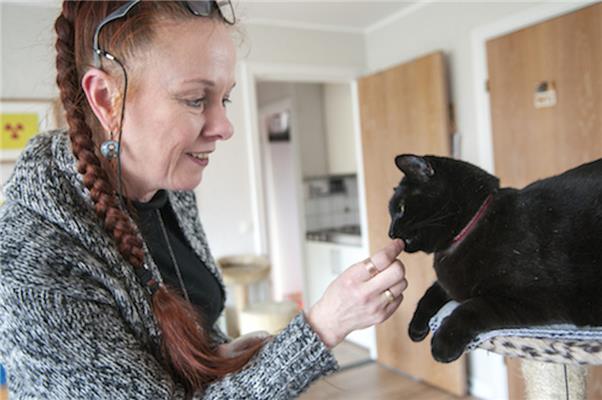 The results may have profound implications for how we communicate with cats in our homes, in care facilities, animal hospitals and shelters. Cats are very popular as pets, and they are increasingly used in therapy and as companions in institutions, such as retirement homes. Therefore, it is important to gain a better understanding of the human–cat relationship.

Since their domestication about 10,000 years ago, cats have learned to communicate with humans using visual as well as vocal signals. Some breeds, such as Siamese and Birman cats, appear to be more talkative than many other breeds, indicating that breed may also be a factor. Wild and feral cats usually have no need to continue meowing after becoming adults when their mother pushes them away, but many domestic cats continue meowing as a way to communicate with or gain attention from humans. However, many aspects of the cat’s vocal repertoire are not well understood.

“We know that cats vary the melody of their sounds extensively, but we do not know how to interpret this variation. We will record vocalisations of about 30–50 cats in different situations – e.g. when they want access to desired locations, when they are content, friendly, happy, hungry, annoyed or even angry – and try to identify any differences in their phonetic patterns”, continues Susanne Schötz.

Another goal is to study whether cats react differently to various aspects of human speech, such as different voices, speaking styles, and intonation patterns.

“For example, we want to know if cats prefer pet–directed speech or prefer to be spoken to like human adults. We still have much to learn about how cats perceive human speech”, concludes Susanne Schötz.
10 Talking Cats