We Are Just Dust in The Interstellar Wind

Cosmic dust is not simply something to sweep under the rug and forget about.

Instead, National Science Foundation (NSF)-funded astronomers are studying and even mapping it to learn more about what it might be hiding from us, where it comes from and what it's turning into.

Some researchers are delving deep down to see how dust comes together at the atomic level, while others are looking at the big picture to see where stars and planets might be forming in dusty stellar nurseries. Recent discoveries, such as that of a very young galaxy containing much more dust than expected, have shown us that we still have much to learn about where exactly all this dust comes from.

A little bit of dust makes a very large problem

A 50 parsec loop around the Sun shows the density of dust in our part of the galaxy (50 parsecs = about 163 light-years).

Although dust only makes up about 1 percent of the interstellar medium (the stuff between the stars), it can have big effects on astronomical observations. Dust has a bad reputation because it gets in the way by absorbing and scattering the visible light from objects such as far-off galaxies and stars, making them difficult or impossible to observe with optical telescopes.

The scattering effect dust has is known as "reddening" -- dust scatters the blue light coming from an object, making it appear redder. This occurs because dust has a greater effect on light with short wavelengths, such as blue. A similar effect is what causes sunsets to appear red.

Astronomers can tell a lot about a star simply by its color, so this reddening effect can trick us into thinking a star is cooler and dimmer than it actually is. However, thanks to NSF-funded astronomers like Doug Finkbeiner of the Harvard-Smithsonian Center for Astrophysics, we can now correct for dust reddening and recover a star's intrinsic color. 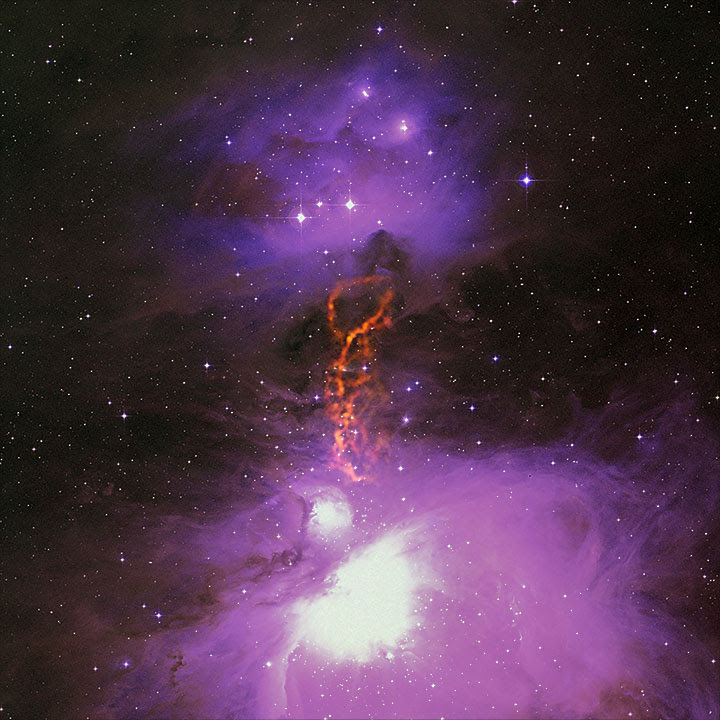 
Finkbeiner first began studying cosmic dust as a graduate student at the University of California, Berkeley in the late 1990s. Dust may seem like an odd thing to dedicate an astronomical career to but "dust is not as obscure as it sounds," Finkbeiner said. "Objects like the Orion Nebula, the Horsehead Nebula, and the Pillars of Creation are dense, dusty clouds intermingled with bright stars, making a beautiful scene. But every part of the sky has at least some dust, and even a tiny amount of dust can interfere with astronomical measurements, so we need a way to correct for it."

Knowing where dust is, and where it isn't, gives us a better understanding of what's happening in our galaxy. For example, an area saturated with dust may indicate a hotbed of star formation activity, while holes in an otherwise dusty area tell us that a supernova may have occurred and blown a pocket of dust away.

"Dust is not a very glamorous name for something this important," said Glen Langston, an NSF astronomy program director. "It represents both sides of star life -- star birth and star death."

These dusty areas are also factories of cosmic chemistry -- chemistry that creates molecules such as graphite (otherwise known as the stuff inside your pencil).

When dying stars explode, they expel dust out into space that can be recycled to make something new. In fact, everything in the universe -- stars, comets, asteroids, planets, even humans, started out as grains of dust floating around in space. As the late astronomer Carl Sagan famously said, "The nitrogen in our DNA, the calcium in our teeth, the iron in our blood, the carbon in our apple pies were made in the interiors of collapsing stars. We are made of starstuff."

Astronomers can peer into the galaxy and tell that some stars are making dust right now, but other dust might be billions of years old with a long, complicated history of growing, shrinking, freezing and burning as it traveled through space.

"It's not a bad analogy to think of dust like grains of sand on the beach," Finkbeiner said. "You might have sand that looks the same because it's coming from a coral reef 100 meters away, but in other places you might have sand that came from very far away which has been through a lot over thousands or millions of years."

Set your course by the stars...or dust

Using data from almost one billion stars, Finkbeiner, along with student Gregory Green and former student Edward Schlafly, created a 3-D map of interstellar dust reddening across three quarters of the visible sky. This map allows astronomers to know when the targets of their observations may be suffering a reddening effect, and how much reddening they can expect. (You can further explore our dusty galaxy through several videos on awebsite Green created.)

Dust distribution reveals our galaxy's structure and we can see that most of the dust is contained in the disk, which is the plane in which the spiral arms of our galaxy lie. It also provides a snapshot of our galaxy’s history, showing that the Milky Way has had its fair share of galactic fender benders with other galaxies. In fact, we are due to collide and merge with our neighbor, the Andromeda galaxy, in about 4 billion years.

Like dents in a bumper, we can see the damage by looking for ghostly trails of dust extending outward from the disk, showing that another galaxy might have passed through, dragging dust from our galaxy along for the ride.

The map already combines data from 2MASS (the Two Micron All Sky Survey) and Pan-STARRS 1 (the Panoramic Survey Telescope & Rapid Response System), but there’s still a long way to go. Using multiple telescopes, 2MASS surveyed the entire sky in three infrared wavelengths between 1997 and 2001, while Pan-STARRS observes the entire visible sky several times per month. Pan-STARRS has provided a lot of data, but it is a drop in the bucket compared to what’s on the horizon.

A few years from now, DECam (the Dark Energy Camera), a sensitive wide-field camera attached to the 4-meter Victor M. Blanco Telescope, will have looked at the entire southern hemisphere, allowing Finkbeiner to update his map to include the full sky in detail. In the 2020s, LSST (the Large Synoptic Survey Telescope) -- a wide-field telescope with an 8.4-meter primary mirror and the largest digital camera ever constructed -- will provide data for 10 times more stars than currently available, recording the entire visible sky twice every week.

LSST will gather more than 30 terabytes of dataevery night, providing more data than ever before.Astronomers like Finkbeiner are excited to face the new challenges this data overload will bring, hoping to solve some of the greatest cosmic mysteries, including the origin of some of the universe’s oldest dust. LSST, DECam, and several other surveys combined will help create a new map of much higher detail.

In the future, Finkbeiner hopes his map will be incorporated with WorldWide Telescope, a free community-driven computer program that gathers the best images from ground and space-based telescopes and combines them with 3D navigation.

"I can imagine the final product as something very beautiful," Finkbeiner said. "So beautiful that every Hollywood movie will want to use it for their flying-through-the-galaxy scenes."