Economically more backward countries are more likely to experience both violent and non-violent civil unrest, according to research by the University of East Anglia (UEA).

The study looked at how economic backwardness has affected the likelihood of social tension and mass movements, from peaceful demonstrations to civil wars, since the end of the Second World War.

For the first time the researchers found that the greater the development gap with the world economic leader, defined as the United States, the more likely a country has experienced non-violent and violent mass demonstrations for regime change and, to a lesser degree, armed civil conflict.

They show that under-development causes social unrest, not vice versa, and suggest that the impact of economic backwardness has been increasing in recent decades as globalisation has made it easier to make status comparisons with others. The results also indicate that on average richer and more democratic countries tend to engage more in non-violent movements for political change than in violent ones.

The findings will be presented today at the Royal Economic Society's annual conference in Brighton by Dr Christa Brunnschweiler, a senior lecturer in economics at UEA, who conducted the research with Dr Päivi Lujala, from the Norwegian University of Science and Technology.

"We argue that economic backwardness not only entails widespread poverty in a country, but can have serious consequences for its peace and stability," said Dr Brunnschweiler. "Our results may serve as a warning to governments that missed opportunities for economic development will come at the price of mounting social tension and unrest. 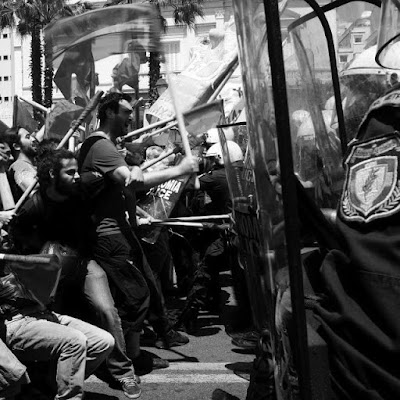 "Economic development is not only desirable for its own sake, but also because a widening gap between development leaders and laggards poses serious risks for internal stability in the countries left behind."

In terms of impact, the results indicate that economic backwardness has a substantial effect on social tension.

For example, Mexico, which has experienced a series of mainly nonviolent, mass political protests, had an average economic backwardness score. Had it been less backward - say on par with Israel or Singapore - its probability of seeing nonviolent protests would have been over 2 percentage points lower, and 5.6 percentage points lower if it had been as developed as its northern neighbour, the US. In South Africa, the richest country in Sub-Saharan Africa, the anti-Apartheid movement of the 1980s often turned violent. Had South Africa been as developed as Spain at the time, it would have been 3.5 percentage points less likely to experience violent social conflict.

The researchers suggest that social tension results from a combination of international comparison - people comparing their situation with others perceived to be better off and striving to catch up - and the inability to emerge from economic backwardness because of either political incompetence or the suppression by governments of any entrepreneurial activity which is perceived as a potential threat to the status quo.

The spread of the internet and the rise of social media have made international comparisons easier than in previous decades, when status aspirations were influenced, for example, by information gathered from migrants' experiences, schooling, or television.

"In an era of the globalisation of information, a backward country's poor or underprivileged population compares its situation not only with that of its better off co-nationals, but also with the situation of peers in neighbouring countries and places farther afield," said Dr Brunnschweiler. "An unfavourable comparison, coupled with a political regime's inability or unwillingness to respond to growing popular discontent, can then lead to a dangerous build-up of social tension.

"Events in the Arab Spring and in the Euro-Maidan demonstrations in the Ukraine, show that the frustrated desire to catch up with the frontier era can extend to the political sphere, particularly with repressive regimes."

Dr Brunnschweiler and Dr Lujala analysed a new dataset on violent and non-violent mass movements for regime change or secession since the Second World War for over 160 countries, together with well-known data on armed civil conflict. They measured economic backwardness as the gap in income per capita between each country and the world development leader. The measure includes technological know-how, welfare and consumption possibilities.

To test the causal effect of economic under-development on social tension the researchers used the geographical distance of a country from either London or Washington and gathered data on mailing times and telegram charges around 1900. They argue that these are strongly linked to economic backwardness not only at the start of the 20th century, but even today.

Contacts and sources:
University of East Anglia (UEA)
on March 21, 2016