In 1958, an amateur fossil collector named Francis Tully discovered a prehistoric animal so bizarre that it could only be termed a "monster." Nearly sixty years later, Field Museum scientists, along with colleagues at Yale, Argonne National Laboratory, and the American Museum of Natural History, have finally figured out what it is.

This is a reconstruction illustrating what Tully monster looked like.

Tully monsters lived in Illinois 307 million years ago (for reference, T. rex lived 67 million years ago), and they look like something out of science fiction--aquatic animals with tube-shaped bodies up to a foot long, skinny snouts ending in a toothed jaw or claw, and eyes at the end of short stalks.

For decades, scientists couldn't determine what kinds of animals the monsters actually were--they were categorized as soft-bodied invertebrates, with theories ranging from worms to shell-less snails. But in a paper published today in Nature, the team of scientists announced that Tully monsters are in fact vertebrates--more specifically, they're jawless fish similar to today's lampreys.

"It's a beautiful example of how science works to solve mysteries of nature, and how museums fit in," said Field Museum Curator of Invertebrate Paleontology Scott Lidgard. The project relied on the Field's collection of Tully monsters--at over 2,000 specimens, the best in the world--as reference material for scientists to compare and analyze the animals' features. Digitization of The Field Museum's collections and X-ray analysis at Argonne National Laboratory helped paleontologists take a closer look at the fossils and determine what they were.

This is a holotype fossil specimen of the Tully monster. 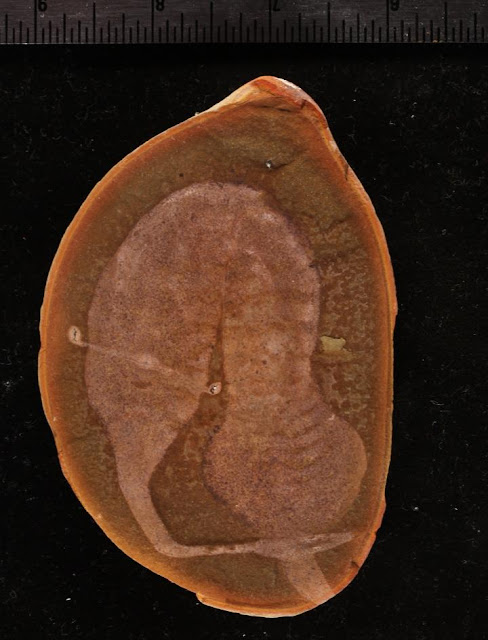 "By digitizing our collections, taking photographs of our fossils and placing all of the data into a database, we made it easier for our researchers to search our collections and find specimens with new and sometimes rarely preserved evidence that may be critical for their research," explained Paul Mayer, The Field Museum's Fossil Invertebrates Collections Manager. "The monsters are related to the jawless fishes that are still around today by a unique combination of traits, including primitive gills, rows of teeth, and traces of a notochord, the flexible rod-like structure along the back that's present in chordate animals--including vertebrates like us."

The Tully monster discovery isn't just important to the world of science, but it's a nice moment in the spotlight for Illinois, too. Tully monsters are only found in the Mazon Creek region, one of the world's richest fossil sites, about fifty miles southwest of Chicago. Mazon Creek specimens paint a vivid picture of Illinois hundreds of millions of years ago, when the area was a swampy shoreline bordering a tropical sea. "Mazon Creek is an amazing window into deep time.

Only a tiny fraction of all the kinds of creatures that have ever existed become fossils, and it's mostly hard parts like bone and shell that survive to tell the tale. Mazon Creek gives us an extraordinarily clear view of past life, preserving even insects, jellyfish, and the Tully monster," said Lidgard. "Research like this is a great way of learning where our world today comes from."

"The Tully monster is a wonderful fossil that captures the imagination of every school kid," adds Mayer. "When I talk to school groups, I used to use the Tully monster as an example of a mystery that paleontologists have been trying to solve ever since it was discovered. Now I'll have to change my talk and use it as an example that highlights the importance of how amateur paleontologists and researchers from different backgrounds can work together using new technologies and museum collections to solve a mystery."