Congenital cataracts – lens clouding that occurs at birth or shortly thereafter – is a significant cause of blindness in children. The clouded lens obstructs the passage of light to the retina and visual information to the brain, resulting in significant visual impairment. Current treatment is limited by the age of the patient and related complications. Most pediatric patients require corrective eyewear after cataract surgery.

Their approach may have broad therapeutic implications for tissue and organ repair.

The clouded lens of a cataract in human eye. 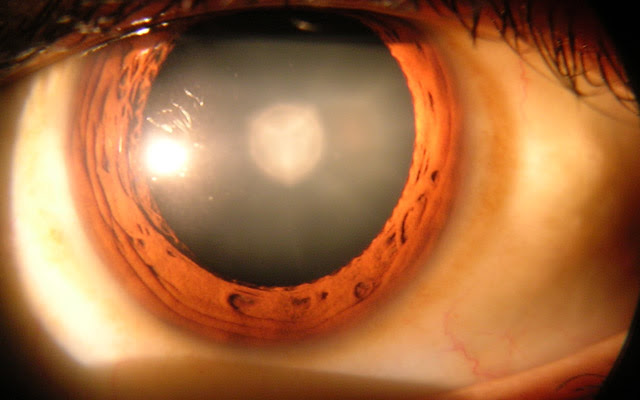 The treatment, which has been tested in animals and in a small, human clinical trial, produced much fewer surgical complications than the current standard-of-care and resulted in regenerated lenses with superior visual function in all 12 of the pediatric cataract patients who received the new surgery.

The findings were published in the March 9 online issue of Nature.

“An ultimate goal of stem cell research is to turn on the regenerative potential of one’s own stem cells for tissue and organ repair and disease therapy,” said Kang Zhang, MD, PhD, chief of Ophthalmic Genetics, founding director of the Institute for Genomic Medicine and co-director of Biomaterials and Tissue Engineering at the Institute of Engineering in Medicine, both at UC San Diego School of Medicine.

In the new research, Zhang and colleagues relied upon the regenerative potential of endogenous stem cells. Unlike other stem cell approaches that involve creating stem cells in the lab and introducing them back into the patient, with potential hurdles like pathogen transmission and immune rejection, endogenous stem cells are stem cells already naturally in place at the site of the injury or problem. In the case of the human eye, lens epithelial stem cells or LECs generate replacement lens cells throughout a person’s life, though production declines with age.

Current cataract surgeries largely remove LECs within the lens; the lingering cells generate disorganized regrowth in infants and no useful vision. After confirming the regenerative potential of LECs in animal models, the researchers developed a novel minimally invasive surgery method that preserves the integrity of the lens capsule – a membrane that helps give the lens its required shape to function – and a way to stimulate LECs to grow and form a new lens with vision.

In subsequent tests in animals with cataracts and in a small human trial, they found the new surgical technique allowed pre-existing LECs to regenerate functional lenses. In particular, the human trial involved 12 infants under the age of 2 treated with the new method and 25 similar infants receiving current standard surgical care. The latter control group experienced a higher incidence of post-surgery inflammation, early-onset ocular hypertension and increased lens clouding.

The scientists reported fewer complications and faster healing among the 12 infants who underwent the new procedure and, after three months, a clear, regenerated biconvex lens in all of the patients’ eyes.

“The success of this work represents a new approach in how new human tissue or organ can be regenerated and human disease can be treated, and may have a broad impact on regenerative therapies by harnessing the regenerative power of our own body,” said Zhang, who also has an appointment at Veterans Affairs San Diego Healthcare System.

Zhang said he and colleagues are now looking to expand their work to treating age-related cataracts. Age-related cataracts is the leading cause of blindness in the world. More than 20 million Americans suffer from cataracts, and more than 4 million surgeries are performed annually to replace the clouded lens with an artificial plastic version, called an intraocular lens.

Despite technical advances, a large portion of patients undergoing surgery are left with suboptimal vision post-surgery and are dependent upon corrective eyewear for driving a car and/or reading a book. “We believe that our new approach will result in a paradigm shift in cataract surgery and may offer patients a safer and better treatment option in the future.”