Scientists at the Max Planck Institute for Extraterrestrial Physics (MPE) have revisited the all-sky survey carried out by the ROSAT satellite, to create a new image of the sky in at X-ray wavelengths. Along with this a revised and extended version of the catalogue of bright and faint point-like sources will be released.

The now published "2RXS catalogue" provides the deepest and cleanest X-ray all-sky survey to date, which will only be superseded with the launch of the next generation X-ray survey satellite, eROSITA, currently being completed at MPE.

This projection shows the sky distribution of 2RXS sources in Galactic coordinates. The size of each dot scales with the source count rate (brightness) and the color represents the X-ray color. 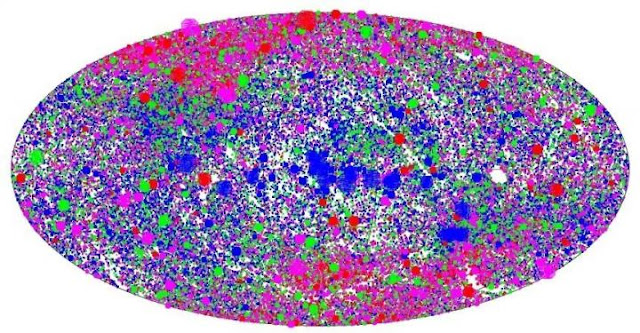 The 2RXS catalogue is the second publicly released ROSAT catalogue of point-like sources obtained from the ROSAT all-sky survey observations performed between June 1990 and August 1991, and is an extended and revised version of the 1RXS catalogue

In the 1990s, the ROSAT X-ray satellite performed the first deep all-sky survey with an imaging telescope in the 0.1-2.4 keV energy band, increasing the number of known X-ray sources by a factor of approximately 100. The intention of the new analysis was to improve the reliability of the catalogue, by re-analysing the original photon event files, using an advanced detection algorithm and a complete screening process.

An important feature of the new catalogue is a statistical assessment of the reliability of the sources. Because of the extreme sensitivity and low background of the ROSAT PSPC instrument, cosmic X-ray sources can be identified with the detection of just a few photons. These are sometimes difficult to distinguish from random fluctuations, and the new catalogue provides an assessment of this effect, based on simulated data.

The catalogue contains more than just a list of sources, for example X-ray images and overlaid X-ray contour lines for each of the detections are provided. For many sources, X-ray light curves were created to shows how the sources vary in brightness on intra-day timescales. For the brightest sources X-ray spectral fits were performed based on three basic spectral models, a power law, a thermal-plasma and a black-body emission model. This is important because it can distinguish what kind of cosmic source produces the X-rays. These include powerful accreting black holes, giant clusters of galaxies, active stars and the remnants of stars that exploded in supernova explosions.

With the new catalogue, the astrophysical community will now be able to explore these objects in the X-ray sky with more confidence, and with considerably more information.

Additionally, the experience gained by the high-energy group at MPE in creating the new ROSAT all-sky survey X-ray source catalogue will be integrated in the data reduction analysis and scientific exploration of the forthcoming eROSITA all-sky survey.

The eROSITA X-ray survey telescope currently built by MPE will be launched in 2017 to scan the whole sky with even higher precision than ROSAT, reaching 30 times deeper into the universe. One of its main goals is to measure the distribution of about 100,000 galaxy clusters, containing thousands of galaxies each. The 2RXS catalogue is the deepest and most reliable X-ray all-sky survey before eROSITA.