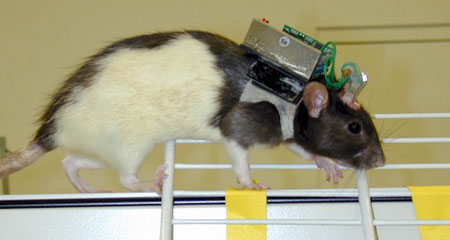 Credit: Penn State University
In a recent paper, the researchers describe how they created rat cyborgs to demonstrate how rats can expedite the maze escape task with integration of machine intelligence. They compared the performance of maze solving by computer, by individual rats, and by computer-aided rats (i.e. rat cyborgs). The rats had to find their way from a constant entrance to a constant exit in fourteen diverse mazes. 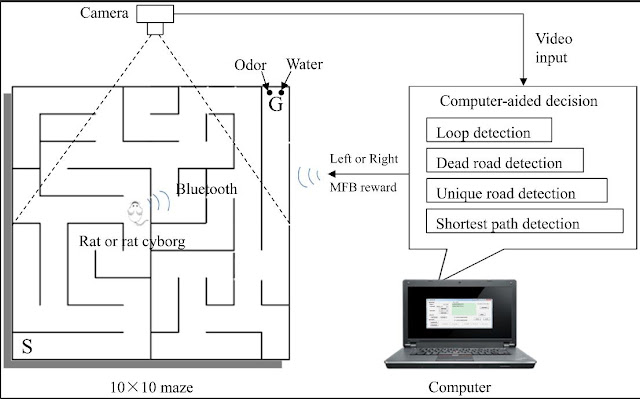 Performance of maze solving was measured by steps, coverage rates, and time spent. The experimental results with six rats and their intelligence-augmented rat cyborgs show that rat cyborgs have the best performance in escaping from mazes. These results provide a proof-of-principle demonstration for cyborg intelligence. In addition, their novel cyborg intelligent system (rat cyborg) has great potential in various applications, such as search and rescue in complex terrains.
Within the past two decades, bio-robots have been created on different kinds of creatures, such as cockroaches, moths, beetles, and rats. They are expected to be superior to traditional mechanical robots in mobility, perceptivity, adaptability, and energy consumption. Among them, rat robots are becoming popular for their good maneuverability.

To make a rat robot, a pair of micro electrodes are implanted into the medial forebrain bundle (MFB) of the rat’s brain, and the other two pairs are implanted into the whisker barrel fields of left and right somatosensory cortices (SI). After the rat recovers from the surgery, a wireless micro-stimulator is mounted on the back of the rat to deliver electric stimuli into the brain through the implanted electrodes. This allows a user, using a computer, to deliver stimulus pulses to any of the implanted brain sites remotely.

Stimulation in MFB can excite the rat robot by increasing the level of dopamine in its brain, and stimulation in the left or right SI makes the rat robot feel as if its whiskers are touching a barrier. Before a rat robot is used for navigation, a training process is usually needed to reinforce the desired behaviors (i.e. moving ahead, turning left and turning right). In this process, the MFB stimulation acts as a reward as well as a cue to move ahead, and the left and right SI stimulation act as the cues to turn left and turn right respectively.

Thanks to the rapid advance of brain-machine interfaces (BMIs), the connection and interaction between the organic components and computing components of the cyborg intelligent systems are becoming deeper and better. Based on such kinds of symbiotic bio-machine systems, a new type of intelligence, which we refer to as cyborg intelligence, will play an increasingly crucial role.

Cyborg intelligence is a convergence of machine and biological intelligence, which is capable of integrating the two heterogeneous intelligences at multiple levels. It has the potential to deliver tremendous benefits to society, such as in search and rescue, health care, and entertainment.

In this research, the mobility, perceptibility and cognition capability of the rats were combined with the sensing and computing power of the machines in the rat cyborg system. The experimental results of the rat cyborg system in maze solving provide a proof-of-principle demonstration for cyborg intelligence.

Similar to rats, the computer had to find a path from the start to the target with no knowledge of the mazes. There are a number of different maze solving algorithms, such as random mouse, wall follower, Pledge, and Tremaux’s algorithm.

In future work, more tasks will be introduced, and the complexity of tasks will be quantified. To avoid excessive intervention with the rats, the strength of the computer’s assistance will be graded. In addition, more practical rat cyborgs will be investigated: the webcam will be replaced by sensors mounted on rats, such as tiny camera, ultrasonic sensors, infrared sensors, electronic compass, and so on, to perceive the real unknown environment in real time; and the computer-aided algorithms can be housed on a wireless backpack stimulator instead of in the computer.

Contacts and sources:
PLoS ONE