Iowa State University engineers have developed a new flexible, stretchable and tunable “meta-skin” that uses rows of small, liquid-metal devices to cloak an object from the sharp eyes of radar.

The meta-skin takes its name from metamaterials, which are composites that have properties not found in nature and that can manipulate electromagnetic waves. By stretching and flexing the polymer meta-skin, it can be tuned to reduce the reflection of a wide range of radar frequencies.

This flexible, stretchable and tunable "meta-skin" can trap radar waves and cloak objects from detection. 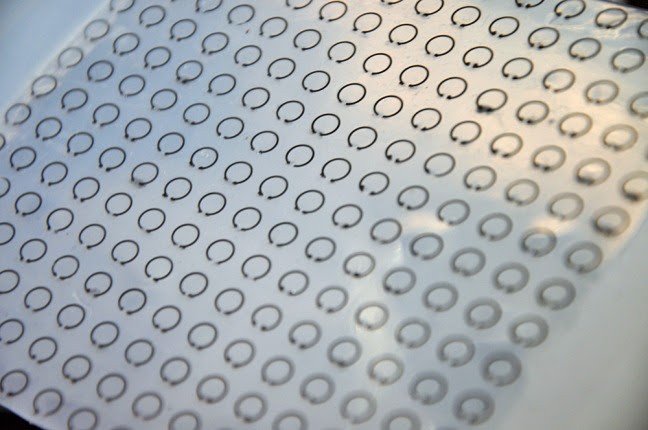 “It is believed that the present meta-skin technology will find many applications in electromagnetic frequency tuning, shielding and scattering suppression,” the engineers wrote in their paper.

Dong has a background in fabricating micro and nanoscale devices and working with liquids and polymers; Song has expertise in looking for new applications of electromagnetic waves.

Working together, they were hoping to prove an idea: that electromagnetic waves – perhaps even the shorter wavelengths of visible light – can be suppressed with flexible, tunable liquid-metal technologies.

What they came up with are rows of split ring resonators embedded inside layers of silicone sheets. The electric resonators are filled with galinstan, a metal alloy that’s liquid at room temperature and less toxic than other liquid metals such as mercury.

Those resonators are small rings with an outer radius of 2.5 millimeters and a thickness of half a millimeter. They have a 1 millimeter gap, essentially creating a small, curved segment of liquid wire.

The rings create electric inductors and the gaps create electric capacitors. Together they create a resonator that can trap and suppress radar waves at a certain frequency. Stretching the meta-skin changes the size of the liquid metal rings inside and changes the frequency the devices suppress.

Tests showed radar suppression was about 75 percent in the frequency range of 8 to 10 gigahertz, according to the paper. When objects are wrapped in the meta-skin, the radar waves are suppressed in all incident directions and observation angles.

Liang Dong and Jiming Song, left to right, hold their meta-skin inside the experiment they used to measure the effectiveness of their radar-trapping device. 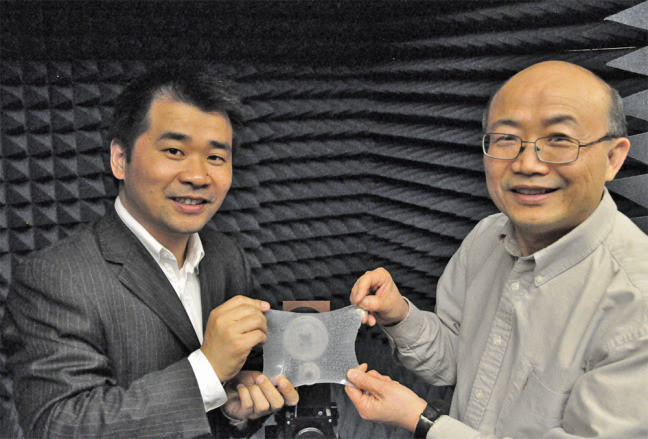 “Therefore, this meta-skin technology is different from traditional stealth technologies that often only reduce the backscattering, i.e., the power reflected back to a probing radar,” the engineers wrote in their paper.

As he discussed the technology, Song took a tablet computer and called up a picture of the B-2 stealth bomber. One day, he said, the meta-skin could coat the surface of the next generation of stealth aircraft.

But the researchers are hoping for even more – a cloak of invisibility.

“The long-term goal is to shrink the size of these devices,” Dong said. “Then hopefully we can do this with higher-frequency electromagnetic waves such as visible or infrared light. While that would require advanced nanomanufacturing technologies and appropriate structural modifications, we think this study proves the concept of frequency tuning and broadening, and multidirectional wave suppression with skin-type metamaterials.”