Astronomers at the University of Massachusetts Amherst report that they have observed the most luminous galaxies ever seen in the Universe, objects so bright that established descriptors such as "ultra-" and "hyper-luminous" used to describe previously brightest known galaxies don't even come close. Lead author and undergraduate Kevin Harrington says, "We've taken to calling them 'outrageously luminous' among ourselves, because there is no scientific term to apply."

Details appear in the current early online edition of Monthly Notices of the Royal Astronomical Society.

This artist's concept depicts the previous record holder (2015) for the most luminous galaxy in the universe. The galaxy, WISE J224607.57-052635.0, is erupting with light equal to more than 300 trillion suns. It was discovered using data from NASA's WISE mission. 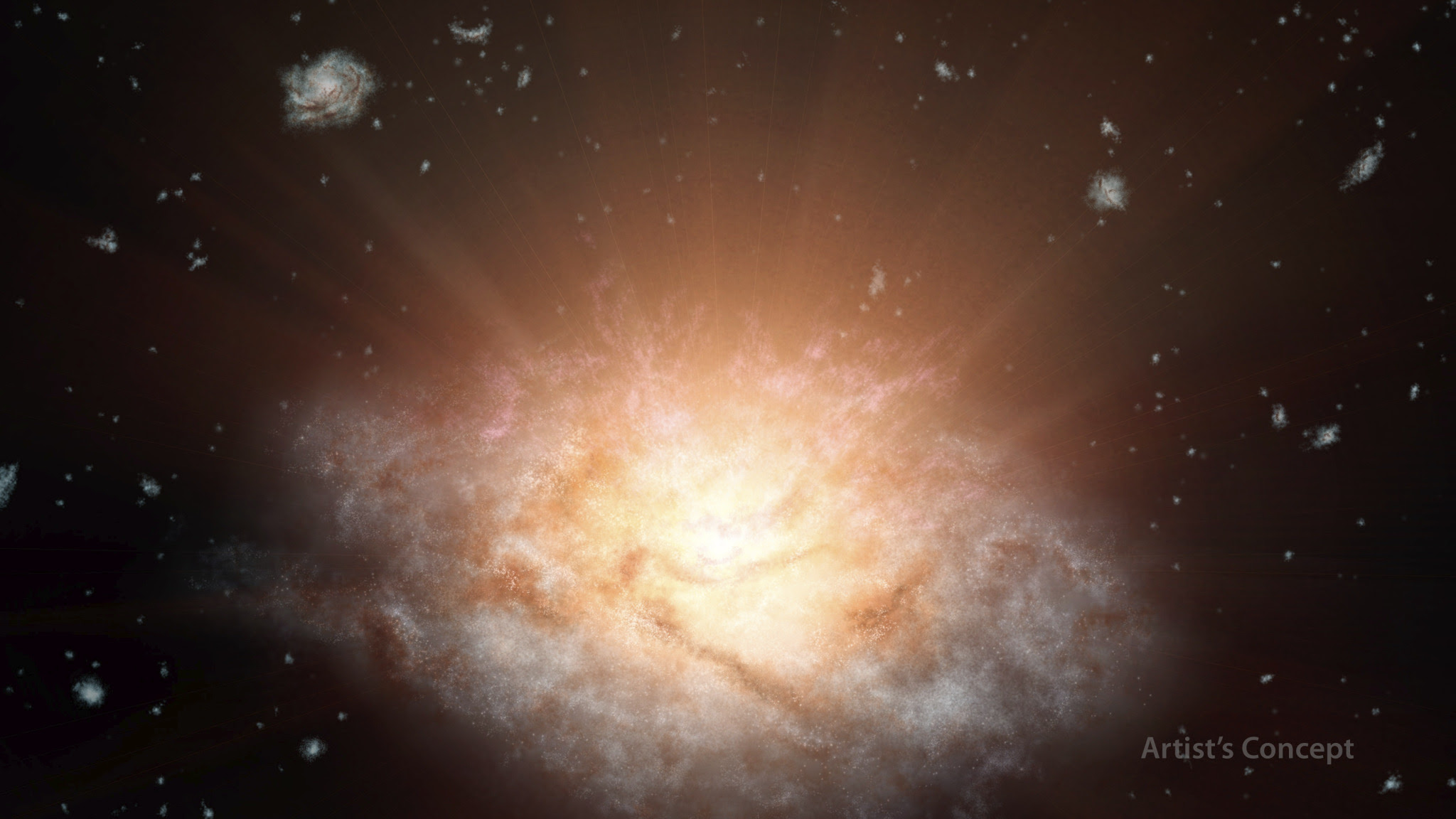 Harrington is a senior undergraduate in astronomy professor Min Yun's group, which uses the 50-meter diameter Large Millimeter Telescope (LMT), the largest, most sensitive single-aperture instrument in the world for studying star formation. It is operated jointly by UMass Amherst and Mexico's Instituto Nacional de Astrofísica, Óptica y Electrónica and is located on the summit of Sierra Negra, a 15,000-foot extinct volcano in the central state of Puebla, a companion peak to Mexico's highest mountain.

Yun, Harrington and colleagues also used the latest generation of satellite telescope and a cosmology experiment on the NASA/ESA collaboration Planck satellite that detects the glow of the Big Bang and microwave background for this work. They estimate that the newly observed galaxies they identified are about 10 billion years old and were formed only about 4 billion years after the Big Bang.

This artist's rendering shows a galaxy called W2246-0526, the most luminous galaxy known as of January 2016. New research suggests there is turbulent gas across its entirety, the first example of its kind. 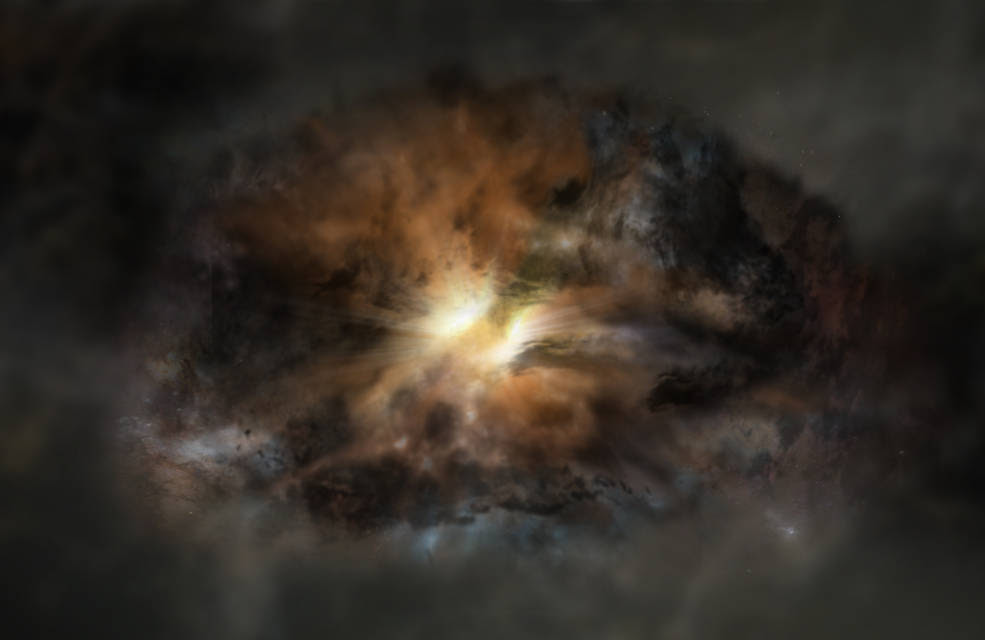 Yun adds, "The galaxies we found were not predicted by theory to exist; they're too big and too bright, so no one really looked for them before." Discovering them will help astronomers understand more about the early Universe. "Knowing that they really do exist and how much they have grown in the first 4 billion years since the Big Bang helps us estimate how much material was there for them to work with. Their existence teaches us about the process of collecting matter and of galaxy formation. They suggest that this process is more complex than many people thought."

The newly observed galaxies are not as large as they appear, the researchers point out. Follow-up studies suggest that their extreme brightness arises from a phenomenon called gravitational lensing that magnifies light passing near massive objects, as predicted by Einstein's general relativity. As a result, from Earth they look about 10 times brighter than they really are. Even so, they are impressive, Yun says.

Gravitational lensing of a distant galaxy by another galaxy is quite rare, he adds, so finding as many as eight potential lensed objects as part of this investigation "is another potentially important discovery." Harrington points out that discovering gravitational lensing is already like finding a needle in a haystack, because it requires a precise alignment from viewing on Earth. "On top of that, finding lensed sources this bright is as rare as finding the hole in the needle in the haystack."
The Circinus Galaxy, a Type II Seyfert galaxy that is less bright compared to hyper-luminous galaxies.  Type II Seyfert galaxies have the characteristic bright core, as well as appearing bright when viewed at infrared wavelengths.  The luminosity of their cores is of comparable intensity to the luminosity of whole galaxies the size of the Milky Way. 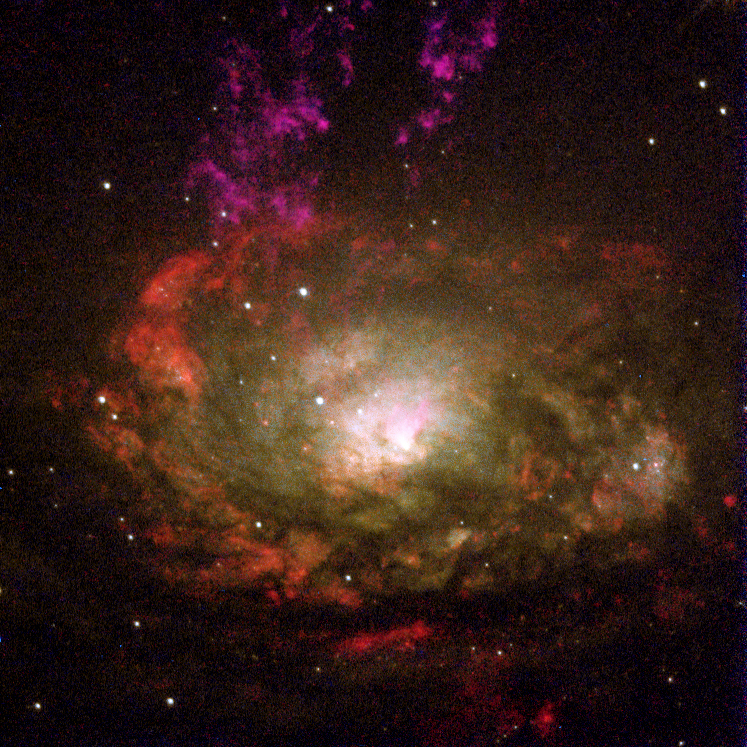 They also conducted analyses to show that the galaxies' brightness is most likely due solely to their amazingly high rate of star formation. "The Milky Way produces a few solar masses of stars per year, and these objects look like they forming one star every hour," Yun says. Harrington adds, "We still don't know how many tens to hundreds of solar masses of gas can be converted into stars so efficiently in these objects, and studying these objects might help us to find out."

For this work, the team used data from the most powerful international facilities available today to achieve these discoveries, the Planck Surveyor, the Herschel, and the LMT. As Yun explains, the all-sky coverage of the Planck is the only way to find these rare but exceptional objects, but the much higher resolutions of the Herschel and the LMT are needed to pinpoint their exact locations.

He suggests, "If the Planck says there's an object of interest in Boston, the Herschel and LMT have the precision to say that the object is on which table in a particular bar next to Fenway Park." With this information, another LMT instrument called "Redshift Search Receiver" can be deployed to determine how far away and how old these galaxies are and how much gas they contain to sustain their extreme luminosities.

One other aspect of this project is extraordinary, Yun says. "For an undergrad to do this kind of study is really impressive. In 15 years of teaching, I have seen only a few undergraduates who pushed a project to the point of publishing in a major journal article such as this. Kevin deserves a lot of credit for this work."

For his part, Harrington, who will graduate in May with a double major in astronomy and neuroscience, says he plans to start his doctoral work in September at Germany's Max Planck Institute for Astronomy and the University of Bonn, continuing this research on galaxy evolution.

Contacts and sources:
University of Massachusetts Amherst
on March 23, 2016