Most Eccentric Planet Ever Found Has Orbit Like a Comet

Led by San Francisco State University astronomer Stephen Kane, a team of researchers has spotted an extrasolar planet about 117 light-years from earth that boasts the most eccentric orbit yet seen.

What's more, Kane and his colleagues were able to detect a signal of reflected light from the planet known as HD 20782 -- a "flash" of starlight bouncing off the eccentric planet's atmosphere as it made its closest orbital approach to its star. The discovery was announced online Feb. 28, 2016 in The Astrophysical Journal.

This graphic shows the orbit of the planet HD 20782 relative to the inner planets of our solar system. HD 20782's orbit more closely resembles that of a comet, making it the most eccentric planet ever known. 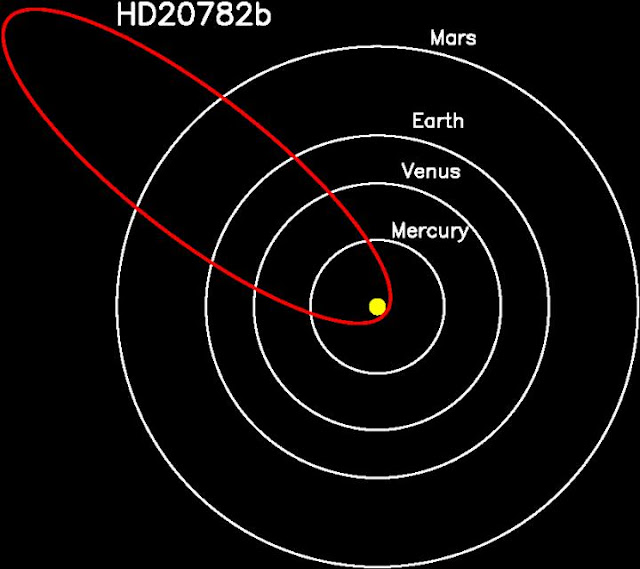 In this case, "eccentric" doesn't refer to a state of mind, but instead describes how elliptical a planet's orbit is around its star. While the planets in our solar system have nearly circular orbits, astronomers have discovered several extrasolar planets with highly elliptical or eccentric orbits.

HD 20782 has the most eccentric orbit known, measured at an eccentricity of .96. This means that the planet moves in a nearly flattened ellipse, traveling a long path far from its star and then making a fast and furious slingshot around the star at its closest approach.

HD 20782 offers "a particularly lucrative observing opportunity" for studying the planetary atmosphere of an eccentric-orbit planet -- a type not seen in our own solar system, the scientists say in the journal article. By studying the reflected light from HD 20782, astronomers may learn more about the structure and composition of a planetary atmosphere that can withstand a brief but blistering exposure to its star.

An artist's rendering shows the planet HD 20782, the most eccentric planet ever known, passing its star in close orbit. 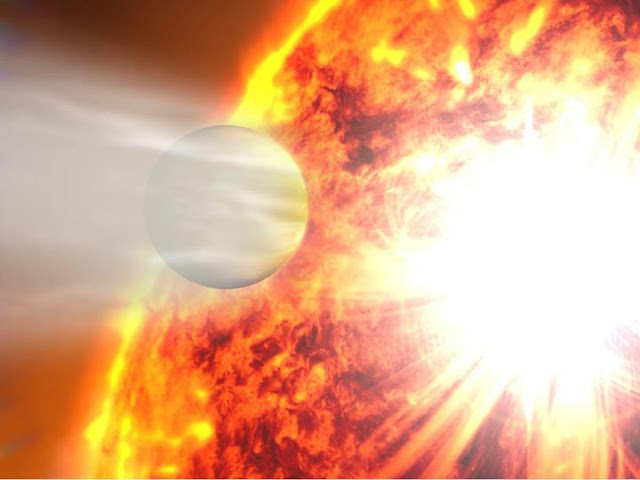 At the furthest point in its orbit, the planet is separated from its star by 2.5 times the distance between the sun and Earth. At its closest approach, it ventures as close as .06 of that same Earth-sun distance -- much closer than Mercury orbits the sun, said Kane, an assistant professor of physics and astronomy. "It's around the mass of Jupiter, but it's swinging around its star like it's a comet."

An earlier observation of HD 20782 suggested that the planet might have an extremely eccentric orbit. Kane and his colleagues were able to confirm its extreme eccentricity and the rest of its orbital parameters as part of the Transit Ephemeris Refinement and Monitoring Survey (TERMS), a project led by Kane to detect extrasolar planets as they pass in front of their stars.

Using these new parameters to time their observations, the scientists also used a satellite-based telescope to collect light data from the planet as it orbited closest to its star. They were able to detect a change in brightness that appears to be a signal of reflected light bouncing off the planet's atmosphere.

The reflected light could tell researchers more about how the atmosphere of a planet like HD 20782 responds when it spends most of its time far away from its star, "but then has a very close approach where it's flash-heated by the star," Kane said.

The percentage of light reflected from a planet, or how bright it appears in the sky, is determined in part by the composition of its atmosphere. Planets shrouded in clouds full of icy particles, like Venus and Jupiter, for instance, are very reflective. But if a planet like Jupiter were to move too close to the sun, the heat would remove the icy material in its clouds.

In some of the extrasolar, Jupiter-sized planets that tread short, circular orbits, Kane explained, this phenomenon does appear to strip the atmospheres of reflective particles, making the planets appear "dark." But in the case of HD 20782, "the atmosphere of the planet doesn't have a chance to respond," he said. "The time it takes to swing around the star is so quick that there isn't time to remove all the icy materials that make the atmosphere so reflective."

Astronomers can't determine the exact makeup of HD 20782's atmosphere yet, but this newest observation does suggest that it might have an atmosphere with Jupiter-like, highly reflective cloud cover.

Extrasolar planets like HD 20782 contain a wealth of questions for astronomers, Kane said. "When we see a planet like this that is in an eccentric orbit, it can be really hard to try and explain how it got that way," he explained. "It's kind of like looking at a murder scene, like those people who examine blood spatter patterns on the walls. You know something bad has happened, but you need to figure out what it was that caused it."

There are few possible "suspects" in the case of HD 20782, Kane noted. It could be that there was originally more than one planet in the system, and one planet developed an unstable orbit that brought the two planets too close together. This collision or near-collision might have ejected one planet from the system entirely and pushed HD 20782 on its eccentric path. The planet is in a binary star system, so it might also be the case that the second star in the binary made a close approach that threw HD 20782 off a more circular orbit.

Kane is a member of the science team for two upcoming satellite missions -- NASA's Transiting Exoplanet Survey Satellite (TESS) and the European Space Agency's Characterizing ExOPLanet Satellite (CHEOPS) -- that will have HD 20782 in their sights after they launch in 2018.