Any one that has eaten roasted chicken can account for the presence in the drumstick (lower leg) of a long, spine-like bone. This is actually the fibula, one of the two long bones of the lower leg (the outer one). In dinosaurs, which are the ancestors of birds, this bone is tube-shaped and reaches all the way down to the ankle.

The fibula bone (orange) in Dinosaurs is as long as the tibia and reaches down to the ankle (upper left), whereas in adult birds, it is splinter-like and shorter than the tibia, missing its lower end (upper right). However, bird embryos actually start out like dinosaurs, and then develop their adult anatomy (centre). The transformation can be stopped by experimental inhibition of Indian Hedgehog (IHH), a bone maturation gene, which leads to a bird with a dinosaur-like fibula (lower right) 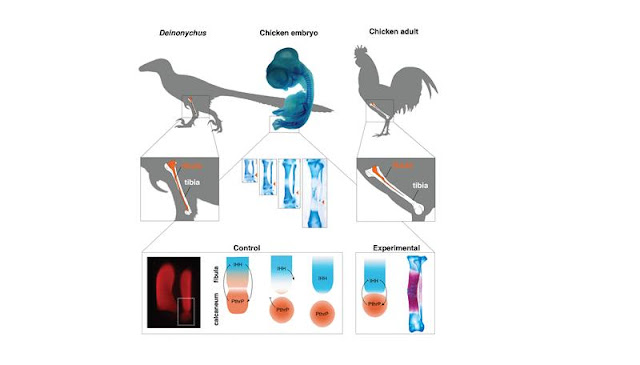 However, in the evolution from dinosaurs to birds, it lost its lower end, and no longer connects to the ankle, being shorter than the other bone in the lower leg, the tibia. Already in the XIXth century, scientists had noted that bird embryos first develop a tubular, dinosaur-like fibula. Only afterwards, it becomes shorter than the tibia and acquires its adult, splinter-like shape.

Brazilian researcher Joâo Botelho, working at the lab of Alexander Vargas (University of Chile) decided to study the mechanisms that underlie this transformation. In normal bone development, the shaft matures and ceases growth (cell division) long before the ends do. Botelho found that molecular mechanisms of maturation were active very early at the lower end, ceasing cell division and growth. When a maturation gene called Indian Hedgehog was inhibited, this resulted in chickens that kept a tubular fibula as long as the tibia and connected to the ankle, just like a dinosaur.

However, its distal end has already become committed to shaft-like development, and matures early. In the chickens with experimentally dinosaur-like lower legs, the calcaneum was still attached to the fibula. Botelho also confirmed the calcaneum strongly expresses PthrP, a gene that allows growth at the ends of bones.

Another interesting observation in the experimental chickens was that the other bone of the lower leg, the tibia, was significantly shorter. This suggests that a dinosaur-like fibula connected to the ankle stops the tibia from outgrowing the fibula, as it would normally do. Working with Jingmai O’Connor (IVPP, China), the research team realized this was consistent with an evolutionary pattern documented by the fossil record. The earliest forms to evolve reduced fibulas were toothed birds from the early cretaceous age, which lived alongside dinosaurs. These forms had splinter-like fibulas that did not connect to the ankle, but were almost as long as the tibia. The fibula first lost its lower end in evolution. This may have allowed the evolution of tibias that are much longer than the fibula, which occurred afterwards.

The results of the entire study have been published this week in the renowned academic journal Evolution . This is the second time Botelho has achieved an experimental reversal to a dinosaur-like trait in birds. Previously, he had managed to undo the evolution of the perching toe of birds, to produce a non-twisted, non-opposed toe, as in dinosaurs (dx.doi.org/10.1038/srep09840) and another lab at Yale obtained a dinosaur-like snout by altering gene expression in embryonic chickens (dx.doi.org/10.1111/evo.12684). However, these studies are not aimed to producing dinosaurs for commercial or non-scientific purposes, as in the “Jurassic Park” movie series.

“The experiments are focused on single traits, to test specific hypotheses” says Vargas. “Not only do we know a great deal about bird development, but also about the dinosaur-bird transition, which is well-documented by the fossil record. This leads naturally to hypotheses on the evolution of development, that can be explored in the lab.”