Scientists have long been puzzled about what makes Mercury's surface so dark. The innermost planet reflects much less sunlight than the Moon, a body on which surface darkness is controlled by the abundance of iron-rich minerals. These are known to be rare at Mercury's surface, so what is the "darkening agent" there?

About a year ago, scientists proposed that Mercury's darkness was due to carbon that gradually accumulated from the impact of comets that traveled into the inner Solar System. Now scientists, led by Patrick Peplowski of the Johns Hopkins University Applied Physics Laboratory, have used data from the MESSENGER mission* to confirm that a high abundance of carbon is present at Mercury's surface.

This oblique image of Basho shows the distinctive dark halo that encircles the crater. The halo is composed of so-called Low Reflectance Material (LRM), which was excavated from depth when the crater was formed. Basho is also renowned for its bright ray craters, which render the crater easily visible even from very far away. 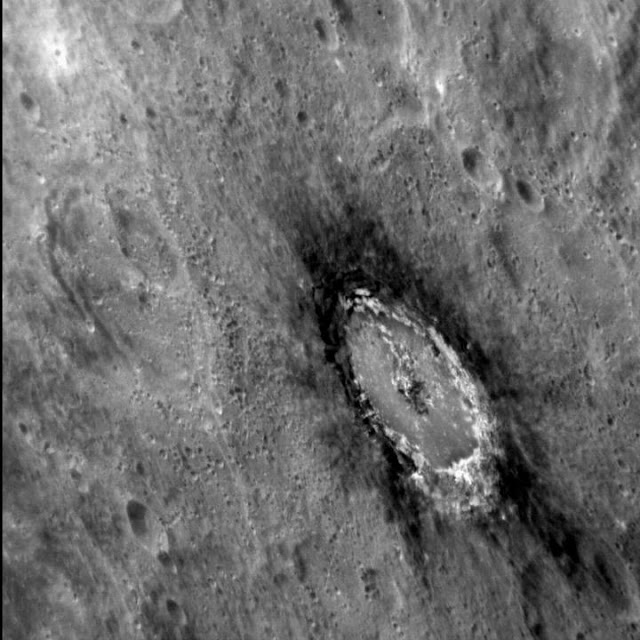 However, they also have also found that, rather than being delivered by comets, the carbon most likely originated deep below the surface, in the form of a now-disrupted and buried ancient graphite-rich crust, some of which was later brought to the surface by impact processes after most of Mercury's current crust had formed. The results are published in the March 7, 2016, Advanced Online Publication of Nature Geoscience.

Co-author and Deputy Principal Investigator of the MESSENGER mission, Carnegie's Larry Nittler, explained: "The previous proposal of comets delivering carbon to Mercury was based on modelling and simulation. Although we had prior suggestions that carbon may be the darkening agent, we had no direct evidence. We used MESSENGER's Neutron Spectrometer to spatially resolve the distribution of carbon and found that it is correlated with the darkest material on Mercury, and this material most likely originated deep in the crust. Moreover, we used both neutrons and X-rays to confirm that the dark material is not enriched in iron, in contrast to the Moon where iron-rich minerals darken the surface."

MESSENGER obtained its statistically robust data via many orbits on which the spacecraft passed lower than 60 miles (100 km) above the surface of the planet during its last year of operation. The data used to identify carbon included measurements taken just days before MESSENGER impacted Mercury in April 2015. Repeated Neutron Spectrometer measurements showed higher amounts of low-energy neutrons, a signature consistent with the presence of elevated carbon, coming from the surface when the spacecraft passed over concentrations of the darkest material.

Estimating the amount of carbon present required combining the neutron measurements with other MESSENGER datasets, including X-ray measurements and reflectance spectra. Together, the data indicate that Mercury's surface rocks are made up of as much as a few weight percent graphitic carbon, much higher than on other planets. Graphite has the best fit to the reflectance spectra, at visible wavelengths, and the likely conditions that produced the material.

When Mercury was very young, much of the planet was likely so hot that there was a global "ocean" of molten magma. From laboratory experiments and modeling, scientists have suggested that as this magma ocean cooled, most minerals that solidified would sink. A notable exception is graphite, which would have been buoyant and floated to form the original crust of Mercury.

"The finding of abundant carbon on the surface suggests that we may be seeing remnants of Mercury's original ancient crust mixed into the volcanic rocks and impact ejecta that form the surface we see today. This result is a testament to the phenomenal success of the MESSENGER mission and adds to a long list of ways the innermost planet differs from its planetary neighbors and provides additional clues to the origin and early evolution of the inner Solar System," concluded Nittler.