Offshore wind turbines have to take a lot of punishment, and this is particularly true for their foundations, which are anchored in the seabed. Divers periodically descend to inspect these structures for defects, but in the future, such checks will be faster and easier to carry out thanks to a new sensor ring. Fraunhofer-Gesellschaft researchers will be presenting a system for this at Hannover Messe from April 25 to 29, 2016 (Hall 2, Booth C16/C22).

Waves beat against the pylons of offshore wind turbines, and winds shake the rotors. Because of this, the base of the turbine, which is located underwater near the seabed, must be able to withstand severe stresses. Corrosive saltwater can also damage the foundations. Divers descend periodically to inspect the highly vulnerable welding seams of these anchor points. They need to determine if these are still in good order, or whether any cracks or defects have appeared that pose a safety risk. To get to the bottom of these questions, the divers first blast the weld with a high-pressure cleaning tool to remove growths like algae and crustaceans. Then they apply an electromagnetic field to the weld and cover it with iron filings. If a crack is present, the field will be forced outwards, and the iron filings will accumulate there. This is a difficult task for the divers, who must carry down a lot of equipment while braving strong currents and allowing themselves enough time to adjust to changing water pressures during the dive. Currently, the inspection of one wind turbine installation takes about a day.

In the future, this arduous and sometimes dangerous task can be performed by a robot; more specifically, a box-shaped remote operating vehicle, or ROV for short. The groundwork for this technology has been laid by researchers at the Fraunhofer Institute for Ceramic Technologies and Systems IKTS in Dresden in cooperation with various industry partners.

“We have developed a sensor ring that simplifies these measurements and will allow them to be performed automatically in the future,” says Andreas Schnabel, project manager at the IKTS. This system offers a number of benefits. It is far more precise than other methods used to date, because for instance it can also analyze the dimensions and depth of cracks, which until now was impossible. Furthermore, this type of inspection is much faster than labor-intensive manual methods – the job is complete in just ten minutes. 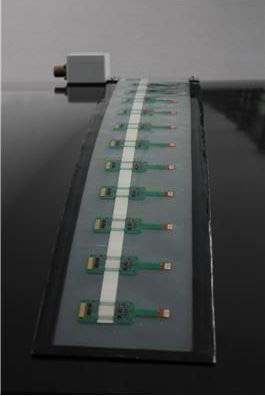 But how does the system work? “The heart of the system is the sensor ring, which is placed around the weld and remains there for the entire service life of the wind turbine,” Schnabel explains. This ring is composed of numerous sensor elements arranged like a string of pearls, with spaces of five to seven centimeters between them. To take the measurements, the diver first connects a battery-powered handheld device to the interface port on the ring and then begins the analysis with the press of a button. In the future, this task will be performed by the robot. The laborious task of cleaning the area using high pressure is no longer needed.

Each of the sensor elements takes its turn in functioning as an actuator. Here’s how it works: the sensor hits the weld with ultrasound waves, which then permeate the entire structure. If there is a crack somewhere, the waves will be reflected back from the damaged area, while passing unobstructed through the intact areas. The other sensors detect these signals, and in this way they can home in on the damaged areas.

The next sensor then takes its turn as an actuator: it transfers the data via cable connection to the handheld reader, whose data is transferred to a PC. As a result, the researchers receive data similar to that of a CT scanner at a doctor’s office. The end user, or in this case the inspector of the offshore wind farm, receives an image of the weld with damaged areas color-coded according to severity.

Working together with staff from Baltic Taucher in Rostock, the researchers successfully demonstrated the viability of the process in an on-site trial at the Baltic 1 offshore wind farm. For this trial, they made a crack measuring 0.9 millimeters in width, 45 millimeters in length, and 7 millimeters in depth in a branched metal pipe, and lowered it to the bottom of the Baltic Sea at a depth of 18 meters.

The trial was a success: not only was the system able to locate the crack with excellent precision, but it even determined its length, height and depth. Researchers are hopeful that the system will be certified and ready for robotic operation in approximately five years. Their goal is to sustainably ensure a long service life for the wind turbines while supporting the transition to new energy sources.